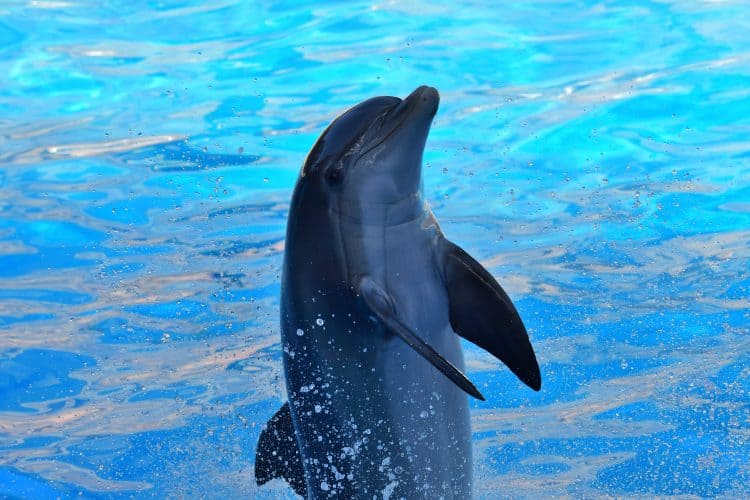 They should be in their natural habitat — the ocean, not tanks! In the wild, dolphins are social mammals that are highly intelligent, love to socialize, and have strong, complex family bonds.

They spend 80-90 percent of their time underwater, and they love playing and foraging for food. Dolphins also swim between 40 to 100 miles per day, but in captivity, they have “access to less than 1/10,000 of 1 percent of the swimming area available to them in their natural environment.”

When in captivity, they are trained through food deprivation, which is why you see dolphins eagerly perform the tricks they’re taught in order to receive food as a reward. They become incredibly depressed when confined to small tanks, as all captive wild animals do, and there have been incidents of dolphins attempting suicide.

Most facilities that keep animals captive attempt to recreate their environment with tanks and pools, and although it’s still not good enough or close to the real thing, some environments are even worse than others. Despite warnings that the desert is no place for dolphins, Dolphinaris Arizona opened in October 2016. By January 2019, four the eight dolphins they had in captivity died.

They announced they were permanently ending the dolphin exhibition, but the four dolphins left were sent to a controversial location: Coral World Ocean Park’s St. Thomas Sea Sanctuary in the Virgin Islands. According to the Dolphin Project, this ‘sanctuary,’ “has faced heavy opposition and controversy mainly due to its location being vulnerable to extreme weather and frequent contamination with run off.”

When this park’s construction permits for the dolphinarium exhibit were approved , the park was still rebuilding from intense damage from Hurricane Irma and Maria. Therefore, the approval sparked outrage amongst animal activists. This is another marine park, not a sanctuary! These dolphins should be sent to an accredited sanctuary where they will be safe from not only being contaminated with diseases, but spreading any viruses or diseases that may have killed the other dolphins at the facility they were previously held captive.

Even more importantly, they should be a sanctuary free of controversy, where it’s known for sure the dolphins will be taken care of and not exploited. If you agree, sign this petition asking Coral World Ocean Park to release them to a safer sanctuary.

This article was first published by OneGreenPlanet on 11 July 2019.