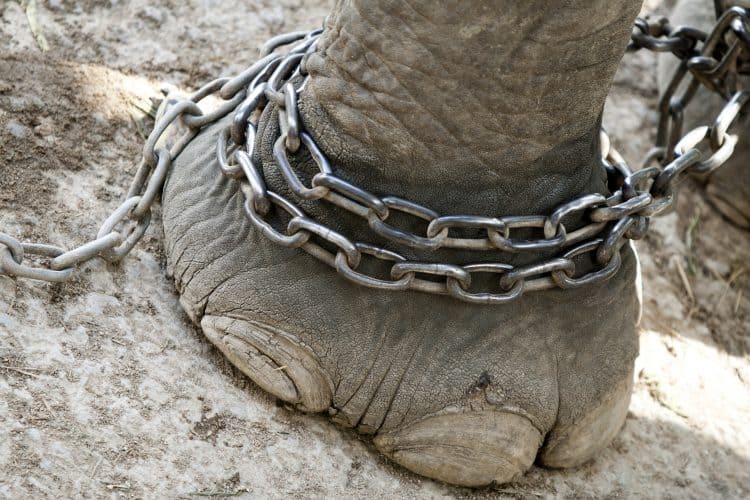 TripAdvisor is often relied on for honest reviews, photos, and prices of vacation excursions. When going on vacation, we like to see which are the best places to visit.

Sadly, certain activities are promoted on the site that support animal abuse. Many wild animals, especially elephants are exploited for the tourism industry.

They are forced through a process called “phajaan” which means their soul is crushed in order to get them to submit to humans and perform tricks or carry people on their backs. They’re also kept on chains and constantly threatened with bull hooks.

A specific elephant’s misery continues in part because of TripAdvisor’s promotions. Lasah is exploited and abused at Langkawi Elephant Adventures (LEA) in Kedah, Malaysia.

Lasah is 37 years old and was captured from the wild as a baby, separated from his mother and herd. He’s been forced to work in logging camps, live in zoos, perform in shows, and more.

No wild animal should be kept in captivity. There are certain basic needs that an elephant needs to be met. The basic needs that Lasah should be able to do are: live with other elephants, sleep lying down, cover himself in mud to protect from sunburn, regulate his body temperature in water, and roam free. None of these are met.

Instead, Lasah lives alone, is chained to the floor, kept clean because tourists don’t want to see muddy elephants, water isn’t available for bathing, and is always chained up when not being exploited.

Not only does TripAdvisor promote activities that are cruel to Lasah through a business called Oriental Village, but there are positive reviews of rides on Lasah.

This legitimizes the attraction and increases the interest and demand in using elephants for tourism leading to more poaching supplying elephants to tourism attractions.

If you are against abusing and exploiting wild animals for tourism or any reason, sign this petition asking TripAdvisor to remove certain pages. The pages are Oriental Village Langkawi, Animal Adventures, “Elephant Ride” at Animal Adventures, and Elephant Cafe.

After signing that petition, please also sign the petition demanding the freedom of Lasah. A local sanctuary, Kuala Gandah Elephant Sanctuary is willing to give Lasah a peaceful, happy retirement if he is unable to be released to the wild after rehabilitation.

This article was first published by OneGreenPlanet on 22 July 2019.