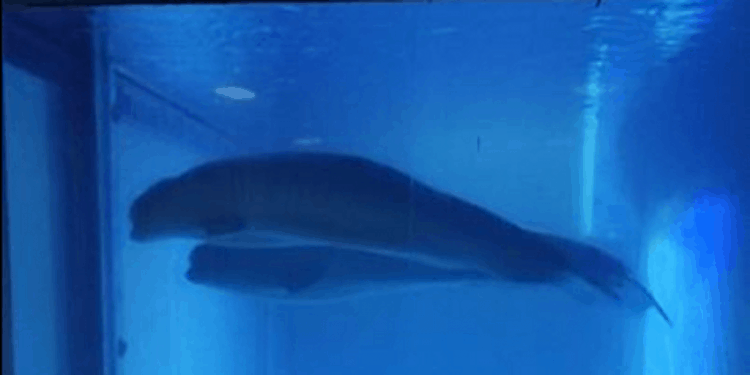 As more and more people every day are condemning companies that hold cetaceans captive (we’re looking at you, SeaWorld), it’s no surprise that an image of two beluga whales imprisoned inside a minuscule tank in China has caused outrage online.

Cambodian anti-captivity organization Ningyo La Mar d’Aprop originally shared the photo taken at Sun Asia Ocean World in Dalian, China. The tank appears to be barren, with no source of stimulation, and is barely wider than the whales’ bodies.

Numerous people expressed their grief on social media. One disheartened commenter stated, “I find this distressing to just watch. I hate to think how those whales must feel.”

Last year, PETA Asia launched a campaign against Sun Asia Ocean World after a video showing a worker applying lipstick to a beluga whale before riding on the animal went viral on Chinese social media. The trainer involved quickly removed the video in response to the huge backlash.

The facility apologized after the lipstick debacle, but it’s clear that not much has changed to improve the lives of the beluga whales imprisoned there.

If anything, it appears that this park has no idea how to care for these animals and needs to send them to reputable sanctuaries.

Marine Parks Are Hell for Whales.

Beluga whales are highly social living beings – their families have up to 25 members, and they can leave and join another pod if they so choose.

Can you imagine how lonely isolation in captivity must feel? And we can only imagine the frustration of being stuck with an unsuitable tankmate for life.

Belugas are also naturally playful and use objects they find as toys. But most of the time in marine parks, they only have a barren tank with concrete walls and apathetic human gazes to keep them occupied.

Marine parks teach the wrong lesson: that it’s acceptable to imprison animals, deprive them of freedom of movement, withhold from them the chance to establish natural territory and explore, breed and group them as we – not they – please, and watch them go insane from frustration and loneliness.

What You Can Do

Beluga whales and all other cetaceans suffer immensely when confined to chlorinated prisons. Hundreds of beluga whales, orcas, bottlenose dolphins, and other marine mammals are still being held in captivity at marine parks across the U.S.

This article was first published by PETA on 22 July 2019.

Absolutely terrible, shameful. Should be released as soon as possible. Really cruel and utterly disrespectful of the poor animal, they should picture themselves in a similiar situation and would then realize the enormity of it.