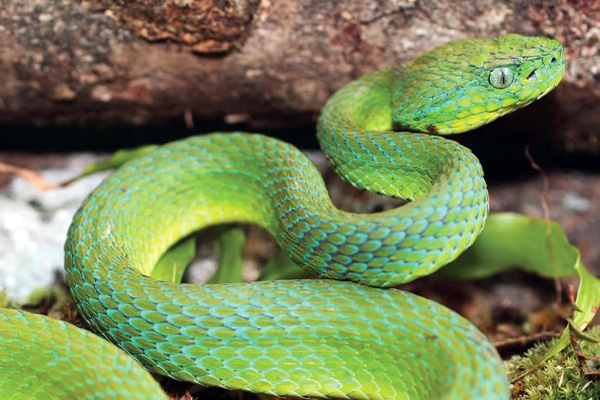 A stunning new species of pit-viper has been discovered in the cloud forest of Honduras. The venomous snake is described in the journal ZooKeys. The species is named Bothriechis guifarroi in honor of Mario Guifarro of Olancho, a conservationist who was gunned down in 2007 as he was working to set up a reserve for the indigenous Tawahka. A former hunter and gold miner, Guifarro had turned to conservation when he witnessed biologically-rich rainforests of Eastern Honduras being torn down for cattle ranches.

The newly described species lives in Texiguat Wildlife Refuge, a protected area that was established in 1987 to safeguard endangered wildlife like jaguars and tapirs. The snake, which is highly toxic, was collected during two expeditions in 2010. Initially it was confused with a more widely distributed Honduran palm pit-viper, but genetic analysis revealed it to be a distinct species, a status that warrants its protection, according to the scientists who discovered it.

“The description of Bothriechis guifarroi has important implications for Central American biogeography as well as conservation,” said study lead author Josiah Townsend, a biologist at Indiana University of Pennsylvania. “We recommend that B. guifarroi be immediately classified as Critically Endangered due to its limited known area of occurrence and the potential for anthropogenic damage to its habitat.”

“We also consider that this species warrants immediate consideration for protection under CITES, given its striking appearance and high potential for exploitation in the pet trade.”

There are some 150 pit-vipers found worldwide, including roughly 100 species in the Americas. Rattlesnakes are among the best-known of Neotropical pit-vipers.

This article was written for Mongabay.com and re-posted on Focusing on Wildlide.