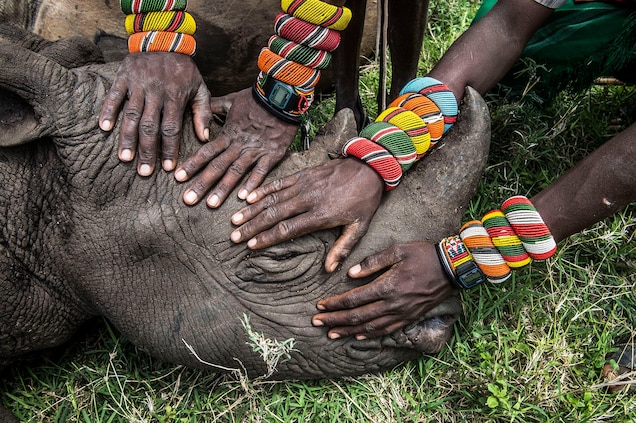 Black rhinos were killed off from Samburu country by poachers, but now the community is bringing them back.

Black rhinos are once again roaming the vast rangelands of the Samburu people in northern Kenya, thanks to relocation efforts by the community and conservationists.

The animals had once been a common sight in the semi-arid region, but the last ones were killed by poachers about 25 years ago. Now, a small population is being reestablished there from existing herds in Kenya’s Lewa, Nakuru, and Nairobi National Parks.

Twenty rhinos are being rounded up, shipped in crates, and released within the newly established Sera Community Conservancy in Samburu territory. At least fourteen of the animals have been moved so far, and biologists hope the animals will reproduce and fan out across the dusty landscape.

“Most Kenyans have never seen a live rhino,” says National Geographic photographer Ami Vitale, who has been on the ground documenting the project.

“Some thought they would have spots and others thought their horn would be flexible, like an elephant’s trunk.”

Organizations behind the effort include the governmental Kenya Wildlife Service and nonprofits Northern Rangelands Trust and Lewa Wildlife Conservancy.

The animals’ new home, Sera Community Conservancy, is locally owned and operated by Samburu people. To deter poachers, the rhinos will be watched over around the clock by the park’s new community rangers, who will receive support from the project’s other partners.

“This will be the first time in East Africa a local community will be responsible for the protection and management of the highly threatened black rhino, signaling a mind shift in Kenya’s conservation efforts,” the Northern Rangelands Trust writes on its website.

“Much needed attention has been focused on the plight of wildlife but very little has been said about the indigenous communities on the frontlines of the poaching wars,” Vitale adds.

This article was first published by National Geographic on  29 May 2015. Lead Image: In Touch With Wildlife – In December 2014, Vitale witnessed Samburu warriors from Sera in northern Kenya encounter rhinos for the first time on a visit to Lewa Wildlife Conservancy in another part of the region. Rhinos were poached off Samburu land years before – Photograph by Ami Vital.