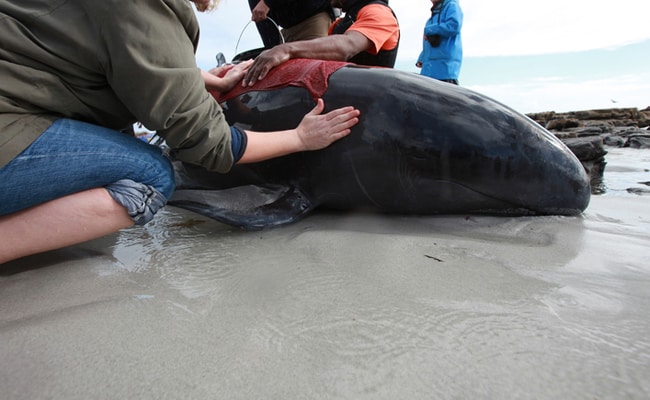 In another tragedy for marine mammals who are being increasingly harmed by our trash, a pilot whale has died in Thailand after consuming a shocking amount of plastic debris.

He was found days ago in a canal near the border of Malaysia clearly in need of help.

Rescuers used buoys to keep him afloat and shielded him from the sun, but despite intervention from veterinarians, he didn’t survive.

A necropsy found he had consumed more than 17 pounds of plastic, including 80 plastic bags, on top of five bags he threw up during the rescue attempt.

It’s believed he mistook the bags for food, possibly mistaking them for jellyfish. After filling up, he was no longer able to eat anything, which led to malnutrition and other health issues that were discovered after he died.

Sadly, what happened to this whale because of our actions is hardly an isolated incident, and it’s a cause for great concern.

“We have no idea how many animals aren’t showing up on a beach,” Regina Asmutis-Silvia,Whale and Dolphin Conservation’s executive director told National Geographic. “This is one pilot whale, this doesn’t consider other species. It’s symbolic at best, but it’s symbolic of an incredibly significant problem.”

In Thailand, local experts estimate that 300 animals are being killed by plastic waste there every year, while others around the world have met a similar fate.

Globally, plastic is a growing threat to whales, dolphins, sea turtles, seabirds and other marine species who continue to consume it.

If there’s any kind of silver lining to this tragedy, it’s that Thai officials are calling on everyone from manufacturers and distributors to consumers to reduce our dependence on plastic, and they will be increasing that call for World Oceans Day on June 8.

The theme this year is, fittingly, preventing plastic pollution and working towards solutions that will help keep the earth’s oceans healthy. For marine species who continue to be affected, action on our part to stem this problem can’t come soon enough.