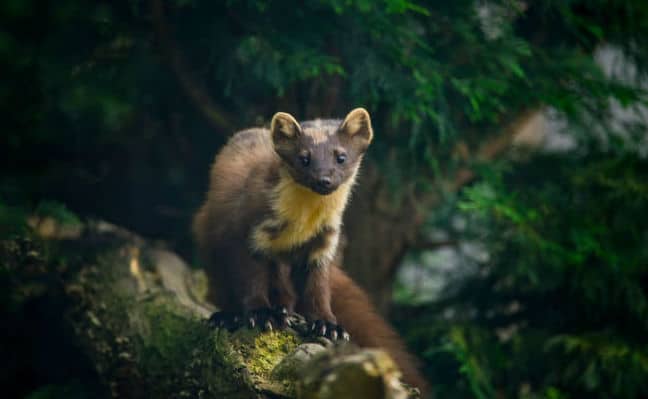 The reintroduction of pine martens in Scotland has been controversial, but data from a new study revealsa potential bonus: These cat-sized predators could help the beleaguered red squirrel to bounce back.

The study, which appears this month in the journal “Proceedings of the Royal Society B,” suggests that while pine martens prey on red squirrels, these predators tend to more heavily impact grey squirrels. And that could give the red squirrel population a much-needed boost.

Our state-of-the-art analysis suggests that we can achieve conservation objectives twice over by allowing a native species, the pine marten, to spread naturally while conserving our precious red squirrel.

There has been a vigorous effort to eradicate the gray squirrel at the same time pine martens had retreated north, but the evidence is, that is changing. Pine martens are now turning up in areas where they used to be and are suppressing gray squirrel populations just through the natural order. They keep the invasive squirrel in check, if not in decline, and we are seeing a recolonization of the red squirrel. We’ve potentially found an answer that doesn’t require the high cost of eradication.

Red squirrel populations are in danger.

For some time now, the UK has faced the difficult challenge of how to promote native red squirrel numbers. Red squirrel populations have been in free-fall since their larger and more aggressive cousins, grey squirrels, were introduced from North America in the 1870s as an ornamental species.

In fact, according to the Woodland Trust, red squirrel numbers have fallen from 3.5 million to between 120,000and 160,000 individuals today. Now, their strongholds are in Scotland, Northumberland, Wales, Northern Ireland and some parts of the Lake District — essentially, any area with large swathes of woodland cover.

In an attempt to remedy this decline, some conservation groups, including the UK’s Wildlife Trust, have pushed for grey squirrel culls. These advocates argue that, in addition to close monitoring and population distribution management, controlled culls via trapping must form part of the solution if the red squirrel is to survive.

There’s some evidence to suggest that where grey squirrels decline, red squirrels quickly reestablish themselves. Of course, this doesn’t speak to the effectiveness or ethics of culls — only the fact that when grey squirrels are removed from a region, red squirrel populations become more robust. As a result, researchers have pursued less invasive solutions to this problem.

And the pine marten appears to be one such solution.

The Pine Marten: When the enemy of your enemy is your friend.

In this latest study, researchers sought to understand how the different squirrel populations might affect each other, so they set up feeding boxes which all three species — red squirrels, grey squirrels and pine martens –could use. The scientists then attached sticky pads to these boxes, allowing them to collect hair samples.

But will pine martens go after red squirrels once they have driven down grey squirrel numbers? That’s a legitimate concern, but the answer appears to be no — and the reason why is quite interesting.

Pine martens were hunted to virtual extinction in the UK, but they’ve since been reintroduced to parts of Scotland. But their reintroduction has not been without issues. Some blame the enigmatic animal for a drastic decline in capercaillie bird numbers. The data doesn’t actually support that claim, but it speaks to the fear surrounding the reintroduction of predators.

This study suggests that the pine marten’s gradual and careful reintroduction into other areas of the UK may help the red squirrel to bounce back, too. This finding reaffirms the importance of predators — ones that we’ve driven out of many habitats — for ecosystem health and biodiversity.