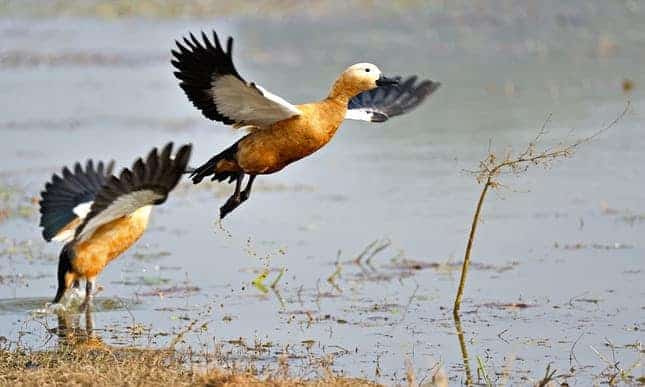 A high-flying species of duck reaches altitudes of up to 6,800 metres (22,000ft) to cross the Himalayas, research from a British university has revealed.

Scientists from the University of Exeter used satellite tracking to find out how ruddy shelducks – which are a similar size to mallards – find their way through the mountain range.

They do not fly over 8,848-metre Mount Everest but do soar to more than eight times higher than the world’s tallest structure, the Burj Khalifa in Dubai.

Quite how they manage it remains known. The scientists are still puzzling out how the species is able to cope at such an altitude.

The only waterfowl known to have flown higher is the bar-headed goose, which reaches more than 7,000 metres. According to the RSPB, the highest flier of all is the Rüppell’s griffon vulture, which can break the 11,000-metre mark. In the UK, buzzards fly at an average of about 400 metres but can soar to more than 1,000 metres.

The efforts of the modest ruddy shelduck are of a higher order. They are known to breed north of the Himalayan mountain range, but spend their winters at sea level south of the Tibetan plateau.

They need to fly over the Himalayas in the spring to return to their breeding grounds, meaning they must cross terrain higher than 4,000 metres, where oxygen levels are halved.

The University of Exeter scientists used satellite tracking to discover that they fly through valleys in the mountain range – avoiding massive peaks like Everest. But they still reach impressive heights.

“This is the first evidence of extreme high-altitude flight in a duck,” said the lead researcher, Nicole Parr, from the centre for ecology and conservation at the University of Exeter’s Penryn campus in Cornwall.

“This species has probably evolved a range of adaptations to be able to cope with flying so high, where oxygen levels are half those at sea level. We don’t yet know the nature of these adaptations. Our research also shows that the ruddy shelduck has a faster climb rate than the bar-headed goose.”

Lucy Hawkes, the supervisor of the work at the university, had previously tracked bar-headed geese to an altitude of 7,290 metres near Everest in 2014.

The geese were long thought to be the world’s highest-flying bird based on flapping flight (others soar higher on thermals), but the new research suggests they may not be the only species flying at very high altitudes.

The scientists used satellite data collected from 15 ruddy shelducks from two populations spending their winter south of the Tibetan plateau.

They found the birds, which take a circuitous route to avoid mountain peaks, regularly fly above 5,000 metres and sometimes go as high as 6,800 metres.

The ducks flew about 800 miles. As well as the lack of oxygen they faced changes in altitude, variable wind speeds and directions, decreasing air temperature and reduced humidity.

It is possible that the ducks studied are not the highest fliers. The researchers suggested that ruddy shelducks wintering further east in India may fly even higher, given the higher terrain that lies north of India.

This article was first published by The Guardian on 06 Sep 2017.