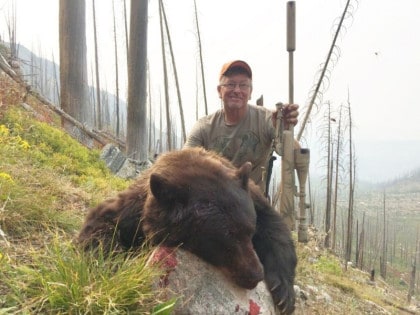 STEAMBOAT SPRINGS, Colorado – A South Dakota man cannot hunt or fish in Colorado for the next 12 years after he was convicted of poaching in north central Colorado.

Robert Stalley was convicted of wasting the meat of a black bear he killed during the 2017 hunting season.

Investigators said Stalley tried to deceive Colorado Parks and Wildlife inspectors during a required inspection of the kill. Stalley presented deer meat and tried to pass it off as bear meat during the inspection.

He did have valid deer and bear licenses at the time of the violation.

“During my interview with Mr. Stalley at his South Dakota home, he stated that he did take bear meat from the backstraps and hindquarters and that he ate some and gave some away; however, our investigation proved otherwise,” Wildlife Officer Jack Taylor of Steamboat Springs said in a press release.

“In addition, Mr. Stalley took deer meat from the same location that the bear was harvested but chose to leave all of the bear meat behind, removing only the head and hide.”

Taylor said he learned of the discarded bear carcass after getting a tip through Colorado’s wildlife tip line.

In July 2018, Stalley pleaded guilty in Routt County court to three misdemeanors. He paid a fine and was forced to forfeit his rifle.

In Colorado, hunters are required by law to prepare all harvested big game for human consumption. The removal of hides, antlers, heads, and abandoning the animal’s meat can bring felony charges against anyone suspected of the crime.

This article was first published by denver.cbslocal.com on 1 July 2019.

Take direct action against poaching and illegal hunting by donating as little as $1 to our “Fighting for Wildlife” crowdfunding initiative. It only takes a minute. Thank you.

Focusing on Wildlife supports approved wildlife conservation organizations, which spend at least 80 percent of the money they raise on actual fieldwork, rather than administration and fundraising. When making a donation you can designate for which type of initiative it should be used – wildlife, oceans, forests or climate.