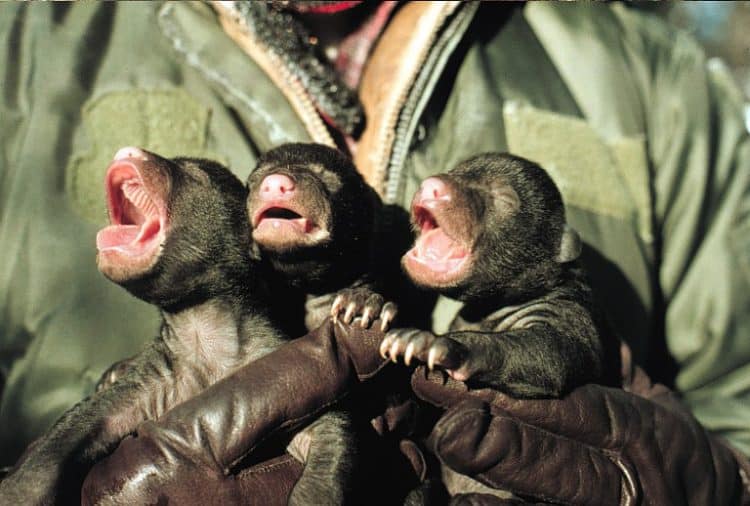 Authorities in Alaska say they have identified two poachers who reportedly killed a female black bear and her cubs from footage taken at the animals’ den in April.

Unbeknownst to the hunters, 41-year-old Andrew Renner and his son, 18-year-old Owen Renner, a motion-activated video camera was trained on the den.

The female bear was part of a study run by the U.S. Fish and Wildlife Service and the Alaska Department of Fish and Game, and she wore a tracking collar.

The scene that unfolded on the video, as described in a dispatch from the Alaska Department of Public Safety, has led to several charges stemming from the incident, including illegally killing a mother bear and killing bear cubs. Andrew Renner also faces a felony charge of tampering with physical evidence.

After skiing to the den on Esker Island in Prince William Sound on April 14, Owen Renner shot the mother bear twice, and then Andrew Renner killed “the shrieking newborn cubs.” The two men returned to the den on April 16 to clean up their shell casings and get rid of the cubs’ bodies.

About two weeks later, Andrew Renner took the collar and the female bear’s skin into an Alaska Department of Fish and Game office, claiming he had killed the bear in a different location and that he hadn’t seen any cubs with her.

Kitty Block, who heads the U.S. Humane Society, expressed her group’s anger at the incident and called on other hunters to denounce the alleged actions of the Renners.

“Whenever trophy hunters display such reckless disregard for law and animal life, the organizations that promote trophy hunting, and the elected officials who support their agenda, eventually move to condemn the scofflaw,” Block wrote in a blog post. “I hope that they will do so now.”

Mongabay requested comment from several hunting organizations in Alaska. Deb Moore, executive director of the Alaska Professional Hunters Association (APHA), responded by email, saying, “APHA believes that any killing of animals outside of established State or Federal seasons and bag limits is contrary to Fair Chase Hunting Ethics, and should be prosecuted to the full extent of the law.”

But Block said, “[It’s] not that simple this time around, because many of these same parties are working to make this sort of killing legal in Alaska.”

The U.S. Department of the Interior has recently proposed changes to a set of hunting rules established in 2015. In 2017, the APHA and the Sportsmen’s Alliance sued the federal government, arguing that the 2015 laws altered “commonly accepted hunting methods, including the … use of bait while hunting bears.”

Evan Heusinkveld, who leads the Sportsmen’s Alliance, said in a post on the group’s website that the laws unfairly impacted Alaskan hunters.

“This is nothing but blatant federal overreach that will destroy Alaska’s predator-prey balance, impact and set precedent for sportsmen and public-land users nationwide and, moreover, decimate residents both economically and in their ability to provide for their families from a subsistence perspective,” Heusinkveld said.

The Sportsmen’s Alliance claimed “broad support” from hunters across the U.S. and from Alaska’s elected officials.

The Humane Society, in a recent statement, contends that getting rid of the 2015 statutes would “permit the use of cruel and unsporting practices to kill bears, wolves and caribou on the National Park Service’s National Preserve lands in Alaska.”

The group also says that many Alaskans oppose some of the proposed changes to the 2015 law. A 2018 survey of around 1,000 of the state’s registered voters commissioned by the Humane Society found that more than 70 percent of respondents said they opposed allowing hunters to kill female black bears in their dens with the help of artificial lighting on national preserve land.

This article by John Cannon was first published in Mongabay.com on 15 Aug 2018.