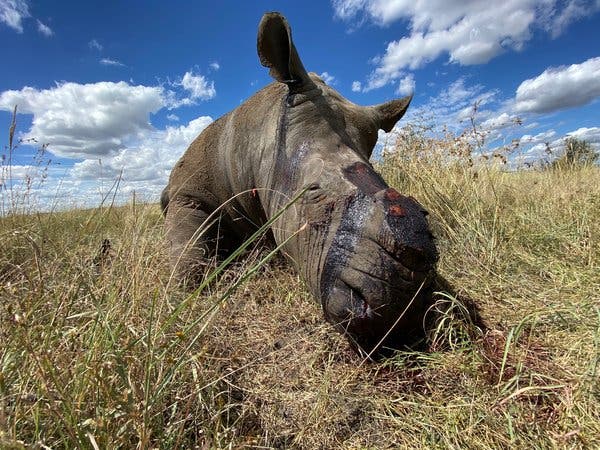 The past few weeks have not been easy for Nico Jacobs, founder of Rhino 911, a nonprofit that provides emergency helicopter transport for rhinoceroses in need of rescue in South Africa. That’s because times are much worse for the rhinos.

Since South Africa announced a national lockdown on March 23 to limit the spread of the new coronavirus, Mr. Jacobs has had to respond to a rhino poaching incident nearly every day. On March 25, he rescued a 2-month-old white rhino calf whose mother had been killed by poachers. The next day he was called to rescue two black rhinos whose horns had been hacked off by poachers. When he finally tracked them down it was too late — both were dead.

“Just as soon as the lockdown hit South Africa, we started having an incursion almost every single day,” Mr. Jacobs said.

At least nine rhinos have been poached in South Africa’s North West province since the lockdown, he said, “and those are just the ones we know about.”

In neighboring Botswana, according to Rhino Conservation Botswana, a nonprofit organization, at least six rhinos have been poached since the country closed its borders to stop the spread of Covid-19. And last week, the country’s government announced that five suspected poachers had been killed by Botswana’s military in two separate incidents.

While poaching is not unusual in Africa — the last decade has seen more than 9,000 rhinos poached — conservationists said the recent incidents in Botswana and South Africa were unusual because they occurred in tourism hot spots that, until now, were considered relatively safe havens for wildlife.

National lockdowns, border closures, emergency visa restrictions, quarantines and other measures put in place to stop the spread of the coronavirus have severely constricted Africa’s$39 billion tourism industry. That business motivates and funds wildlife conservation across the continent, leading some experts to fear that threatened and endangered animals may become additional casualties of the pandemic.

During this time of year, Africa’s national parks, conservancies and private game reserves should be teeming with tourists and trophy hunters. But thanks to border closures and crackdowns on international travel, foreigners couldn’t visit these places even if they wanted to.

“It’s very unfortunate,” said Anthony Ntalamo, owner of Tony Mobile Safari, a Botswana-based safari company, who was expecting more than 150 customers in the months to come.

In places like the Okavango Delta and Kruger National Park, where lions, leopards, rhinoceroses, elephants and Cape buffalo are on full display, tourists, hunters and the guides they hire to lead their expeditions have a far greater presence than law enforcement.

Without them, the task of monitoring millions of acres of remote and unforgiving wilderness rests solely on the shoulders of a few thousand rangers.

“Without the tour guides, the rangers are like somebody moving without one leg,” Mr. Ntalamo said.

Nearly all of Mr. Ntalamo’s clients have canceled their upcoming trips. Unless things turn around, he may soon have no choice but to put his 12 employees on unpaid leave.

“People are being laid off in the tourism industry by the dozens in Africa at the moment,” said Andrew Campbell, the chief executive of Game Rangers’ Association of Africa. “All these things are happening because, without tourists, there is no money.”

Rangers and private game guards could be next.

Without that revenue, many parks, private reserves and community conservancies may not be able to pay employees.

Lynne MacTavish, the operations manager at Mankwe Wildlife Reserve in South Africa’s North West province, is doing everything she can to avoid such a scenario. Her 4,750-hectare reserve should be crawling with visiting researchers and tourists. But since the coronavirus arrived, it’s just been her and a skeleton crew.

“We’re in a situation of zero income, and our expenses are actually going up all the time just trying to fight off the poachers and protect the reserve,” Ms. MacTavish said. “To say it’s desperate is an understatement. We’re really in crisis here.”

To avoid layoffs, Ms. MacTavish has stopped collecting a salary and has cut the pay of her fellow managers by 30 percent. But that will only keep the reserve above water for another three or four months. If things don’t improve, she may be forced to make difficult decisions.

“Our staff is made up of people from all parts of Southern Africa, and collectively they are supporting 131 dependents. Many of these dependents are from Malawi and Zimbabwe and other countries facing starvation,” Ms. MacTavish said. “They rely heavily on us in order to feed their families, and we can’t just turn our back on them.”

If the economic situation doesn’t improve, Ms. MacTavish expects to see more poaching in the coming months. “We’ve had a few incursions recently, but I’m expecting an onslaught if this lockdown carries on for months on end.”

“We can expect not only poaching of rhinoceros and elephant and other iconic animals, but we can also expect a spike in bushmeat poaching across the continent,” he said. “There are going to be a lot of people that are not earning a living and they will turn on the natural world and you cannot blame them. These are hungry people.”

In the hopes of alleviating the situation, the Nature Conservancy, a U.S.-based environmental organization, recently began raising money for cash-strapped parks, conservancies and private reserves in Africa that need help paying rangers and guards.

While the full impact of the coronavirus on Africa’s wildlife remains to be seen, the events of the past two weeks illustrate the risks of relying too heavily on tourism to support conservation.

Catherine Semcer, a research fellow with the Property and Environment Research Center in North Carolina, believes the only way to prevent this from happening again is to diversify the sources of revenue that support wildlife conservation.

“We don’t want to decouple conservation from tourism, but I think we need to expand the range of sectors that support it,” she said.

Until this happens, Africa’s wildlife will remain in jeopardy and conservationists like Mr. Jacobs will continue getting calls about orphaned baby rhinos.

This article was first published by The New York Times on 8 April 2020.