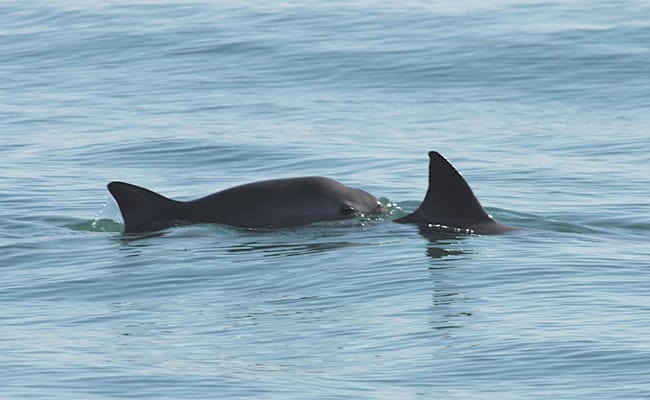 Poachers in the Gulf of Mexico have reached a new level of violence after shooting down a Sea Shepherd drone for the first time.

Sea Shepherd ships were in the Sea of Cortez as part of a Operation Milagro IV to save the critically endangered vaquita porpoise and endangered totoaba bass from illegal fishing when they spotted suspicious activity on December 24.

The vaquita only exists in a small area in the Gulf of California, off the coast of Mexico. Despite past efforts to protect them, including the creation of a refuge in 2005, their numbers have continued to decline at an alarming rate.

They lost nearly half of their entire population from 2015 to 2016. Over the past five years, their numbers have dropped by 90 percent, and there are now believed to be fewer than 30 individuals left in existence, who continue to suffer heartbreaking losses.

Sea Shepherd has been working in partnership with the Mexican Navy to protect the vaquita by policing the area for illegal activity and removing what nets they can, but illegal fishing is still a major problem for wildlife, and poachers are clearly not happy about their presence in the area.

After being shot at once, Sea Shepherd sent the drone out again to another spot when 13 shots were fired at the drone.

“Our drone was shot down,” said drone operator Jack Hutton. “The poachers don’t want us looking at them, even if it means making use of automatic weapons, reaching a new level of violence.”

According to Sea Shepherd, poachers have attempted to take out drones before with rocks, bricks, and even fish, but this is the first time drones have been shot at. Despite the threats, the organization isn’t backing down.

“We are not going anywhere,” said Captain Benoit Sandjian. “We will not be intimidated by these threats. The vaquita needs us, and so does the long list of species impacted by poachers in the Sea of Cortez. For as long as there are illegal nets in these waters, Sea Shepherd will be here to pull them out.”

A coalition of conservation organizations has also just sued the Trump administration for failing to respond to an emergency request to ban the import of seafood from Mexico that is caught illegally.

As of 2022, the Marine Mammal Protection Act will require the U.S. to ban imports of seafood that kill marine mammals at a level above what is set in the U.S. for allowable bycatch. Even though the rule is a few years away from going into effect worldwide, conservationists are hoping for an emergency application, because the vaquita doesn’t have that much time left.

“We can’t leave any tool unused that will help get the vaquita’s killer ― gillnets ― out of their habitat,” said Zak Smith, senior attorney with the Natural Resources Defense Council’s Marine Mammal Protection Project. “The fishing industry is driving the vaquita’s extinction ― and pressure on that group to fix their practices may be the most important way to save these porpoises. The United States must immediately ban the import of any seafood from Mexico that is contributing to the vaquita’s extinction.”

For more on how to help support efforts to save the vaquita, check out Sea Shepherd’s Operation Milagro IV, Boycott Mexican Shrimp, the Animal Welfare Institute, National Resources Defense Council and Center for Biological Diversity.