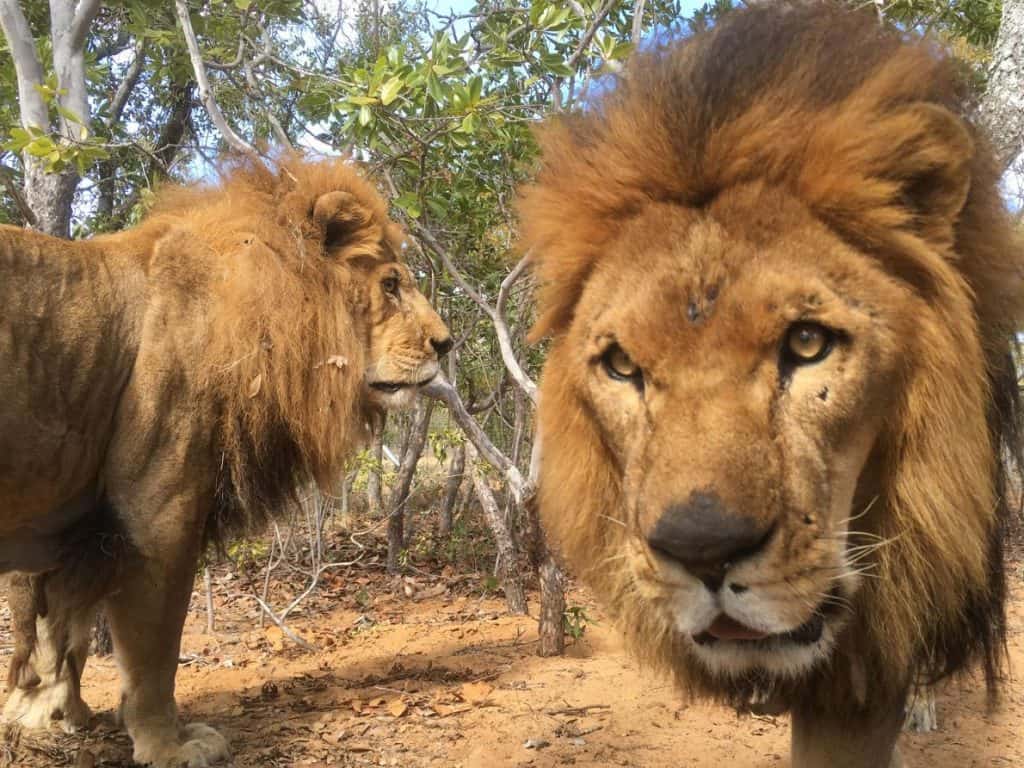 It was a fairy tale ending when 33 lions rescued from circuses in Peru and Colombia were airlifted to a sanctuary in South Africa in May 2016. Setting foot on the sandy soil after years of abuse, they must have felt they were in paradise.

Right from the start, two of the male lions, José and Liso, housed in the special needs section of the Emoya Big Cat Sanctuary, were fast friends. Liso looked out for José, who had brain damage from blows to his head during his circus days, guiding him around their enclosure.

When the team from Animal Defenders International first saw them in Peru, “they were snarling, spitting balls of fury,” recalls Jan Creamer, CEO and co-founder of the London-based nonprofit.

But with reassuring routines and gentle treatment in their new home, the lions soon calmed down.

Then in the early hours of May 29, 2017, tragedy struck: Poachers entered the sanctuary, poisoned José and Liso in their enclosure, and hacked off their heads, tails, paws, and skins.

The killing appears to be the leading edge of a new trend: poachers targeting lions at sanctuaries, private nature reserves, and breeding farms for their body parts.

Lion bones are sought after in Asia for use in traditional medicine—as health tonics and wines—and increasingly as a substitute for remedies made from the bones of tigers, whose numbers in the wild are somewhere around 3,900. Lion teeth and claws are also in high demand in China and elsewhere in Asia as necklaces and other adornments and trinkets. In some African countries the heads, tails, and paws are favored for use in traditional medicine, known as muti.

“It really shook us,” says Tim Phillips, co-founder of Animal Defenders with Creamer, of José and Liso’s killing. “We lived with them for a long time. We did a lot of one-on-one rehabilitation with them, and we did a lot to get them. We were so close to these animals. They were favorites.”

He says the top priority now is to find José and Liso’s killers. “They’ve picked on the worst people possible. They’ve killed two members of the ADI family, and we will not let it go.”

WHO’S BEHIND THE KILLINGS?

Animal Defenders International is working with police in South Africa and also gathering information about other attacks on privately owned captive lions. In 2015 there were none. “Then in 2016 the attacks began and have continued to escalate,” Phillips says. “It’s part of an awful pattern.”

According to Animal Defenders, at least 20 captive lions, including José and Liso, were killed or targeted in Limpopo province, in the northeastern part of the country, during the first eight months of 2017. The trend is upward—during all of 2016, 18 attacks were reported. Most victims were poisoned and mutilated, with their heads, paws, and other parts cut off.

Paul Funston, senior director of the lion program at Panthera, a conservation organization devoted to the world’s wild cats, says there’s also been “a massive spike” in killings of lions in the wild during the past few years. “Poachers cut off the head and feet and leave the mutilated carcass. They extract the teeth and claws later. It’s much rarer for poachers to process the lion for bones because it takes longer.”

Funston suggests that some of the same people involved in lion killings may also be poaching rhinos—lion parts, which may be legal, are sometimes found in shipments of smuggled rhino horns. When Mozambican authorities seized 23 rhino horns at Maputo airport in March 2016, for example, they also found 19 lion teeth and 57 claws. The arrest in May 2017 of a rhino horn kingpin in Vietnam also yielded lion parts. In South Africa seven suspects were arrested in February 2017 for smuggling rhino horn, elephant ivory, and lion claws and teeth, and a bust in June uncovered a stash of rhino horns and lion bones.

ROLE OF THE LEGAL TRADE?

Phillips believes the legal international trade in bones and other parts from captive-bred lions is contributing to the killings by stoking demand. The decision to keep a legal trade in the parts of captive lions was a compromise made at the meeting in South Africa last year of 182 countries that are party to the Convention on International Trade in Endangered Species of Wild Fauna and Flora (CITES). A proposal to stop all commercial trade in lions and their parts was rejected, and it was instead decided to prohibit international commercial trade in bones, teeth, and claws from wild lions and continue allowing it for captive-bred lions.

In the past, says Panthera’s Funston, conservationists didn’t think that trade in lion parts was a serious threat. More problematic, it was believed, were habitat loss, bush meat hunting of lions’ prey animals, which robs the cats of food, conflict with humans over lions’ predation of their livestock, and trophy hunting.

Sales in Asia of bones, teeth, and claws are booming, and Funston thinks that’s partly because the legal trade has stimulated new markets. “In the past there was tiger bone wine,” he says. “Now you can buy lion bone wine—it’s a completely new product.”

Colman O’Criodain, the World Wildlife Fund’s wildlife practice policy manager, is of like mind. He told the Guardian that, “as with the trade of parts of captive-bred tigers, the trade in bone from captive-bred lion keeps demand for big cat bone alive and complicates enforcement efforts.”

According to Funston, increased demand in Africa for traditional medicine products isn’t to blame. “There’s always been a demand for lion parts for muti,” he says. “What’s changed? I can see no trigger or driver for why there would be an upsurge. This is 100 percent driven by new demand in the Far East.”

Rescued Lions and Tigers Re-Learn How to Hunt Watch rescued big cats at a sanctuary in the Netherlands go through unique training to learn how to hunt prey in the wild.

Michael ‘t Sas-Rolfes, a research fellow with the Oxford Martin Programme on the Illegal Wildlife Trade and a lead researcher for a forthcoming report on the lion bone trade, notes that certain bones in a lion’s paw are used by Africans in the traditional practice of “throwing the bones” to divine information about such things as personal difficulties and health problems. He acknowledges that although José and Liso may have been killed not for their bones but for muti, Asian demand for bones may be playing a role in the increased killings of privately owned lions.

Even if captive lion killings aren’t directly related to the Asian market, they may be indirectly influenced by it, according to ‘t Sas-Rolfes. In South Africa, he says, “lion hunting had been going on for some time, providing a low-cost source of body parts to the locals.” But now that lion carcasses “have acquired greater value for the export market, the supply to the local market is likely not as secure or cheap as it was, and that might be a factor that’s contributing to local poaching for muti.”

He also notes that lion ranchers in South Africa were thrown into disarray by the U.S. Fish and Wildlife Service’s ban, as of October 2016, on imports of trophies from captive-bred lions because “canned” hunting of these cats was determined to have no conservation value. “A lot of breeders have lost one of their most significant markets,” ‘t Sas-Rolfes says, and that means some may be stepping up their breeding for lion bones. “It’s not a stable industry right now.”

Although it’s not possible to draw a direct line between the CITES decision and our lions dying, Phillips says, “it’s part of the same tapestry.” All the markets for lion parts—from traditional medicine to trophies—are a mixture of legal and illegal, he says. Captive lions are easy prey, and “until we have more comprehensive protection and make it incredibly hard to sell any of these animals’ body parts, these killings will continue.”

“It is important not to react on the basis of assumptions or rumors, especially given the emotive nature of some of these issues,” notes CITES spokesman Yuan Liu. “As a science and facts-based convention, CITES will analyze and consider the available data before drawing conclusions as a part of its science-based decision making.”

CITES, he says, is undertaking a study due in July 2018 on the legal and illegal trade in lions, including lion bones and other parts and derivatives, to ascertain, among other things, the origin and smuggling routes of that trade. “Only when this study is completed will [CITES] be in a position to meaningfully comment.”

Protecting the 31 remaining lions rescued by Animals Defenders International that live at the Emoya sanctuary is expensive—“a huge, sudden add-on,” Jan Creamer says. The organization is now spending $7,000 a month on armed guards, plus more for other needed security improvements.

To help defray these costs, Animal Defenders, together with the musician Moby, launched the José and Liso Anti-Poaching Fund. The fund, which has an initial target of $100,000, will support the South African police’s anti-poaching officers with their investigations, help collect and analyze information, and identify poaching patterns in order to bring José and Liso’s killers to justice. It will also be used to investigate and obtain evidence on other killings of captive lions and other big cats and to build a picture of what is happening and where.

Phillips hopes that what befell the two lions will help end the lion parts trade before it reaches the terrible scale of the tiger trade. José and Liso, Phillips says, “lived together, looked after each other, and—tragically—died together.”

This article was first published by National Geographic on 19 Oct 2017.

Bonnie, the lion on dirt reaching for meat is only to teach her how to hunt prey in the wild – they are hoping she can be moved to a sanctuary where she could possibly live out her life outside – somewhat the way she would if she was free.