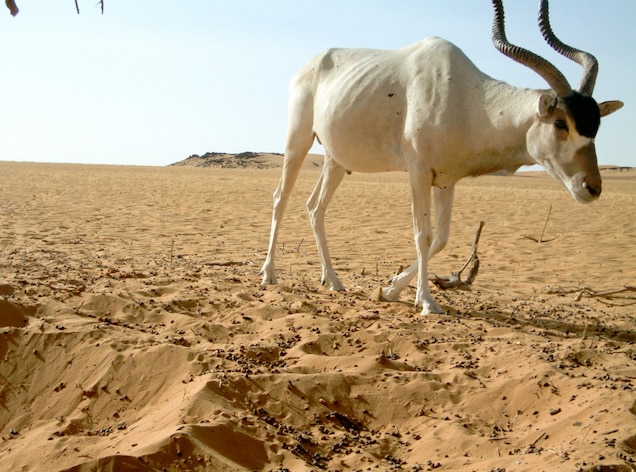 Life in the Sahara is no cakewalk. The baking sun raises temperatures to more than 120 degrees, howling winds conjure up dust devils and sand storms, and years can pass before a drop of rain falls.

One desert creature is spectacularly adapted to these conditions: the addax, an ethereal-looking antelope with elongated, corkscrew horns. The animals rarely need to drink (impressive considering this is one of the largest mammals in the desert), their flat hooves keep them from sinking in the sand, and their coats turn from brown in winter to white in summer to help cool them down.

But as it’s turned out, there are two things in North Africa that addaxes can’t adapt to: civil war and oil drilling.

Many hundreds of the antelopes once roamed the Sahara from Sudan to Mauritania. According to John Newby, CEO of the Sahara Conservation Fund, a nonprofit that’s been tracking them during the past decade, there were some 200 in 2007. Newby says that population, though small, was viable. But he believes addax numbers have fallen dangerously in the wild, to fewer than 100 scattered in eastern Niger and possibly neighboring Chad. (Some 2,000 live in zoos, breeding centers, and private ranches).

Newby hopes the addax can avoid the same fate as another desert antelope, the Scimitar-horned oryx, which went extinct in the wild in the 1980s during Chad’s civil war. In Niger, the recent problems date back to 2008, when China’s state oil company, China National Petroleum Corporation, was given oil exploration rights.

They’re part of the magic of the desert. Thomas Rabeil | Sahara Conservation Fund

“As luck would have it,” Newby says, “their area of interest landed slap-bang in the middle of the addax population in Tin Toumma,” a remote region in eastern Niger that held the largest addax population.

The Nigerien government assigned military units to protect oil workers in and around the region. Some of these men began driving four-wheelers through the heart of addax country, shooting the animals for sport and meat in violation of Nigerien law, says Thomas Rabeil, the Sahara Conservation Fund’s regional project officer.

Things got worse in 2011 after Libyan leader Col. Muammar Qaddafi’s overthrow triggered an exodus of returnees to Niger through addax areas. New trafficking routes for everything from drugs to arms opened up between Niger and Libya, and, Newby says, the animals took more hits from poachers.

There was some good news in 2012. Amid all this turmoil, Niger set up the largest preserve in Africa—the Termit & Tin Toumma National Nature Reserve—to protect the remaining addax as well as other animals such as dama gazelles and Barbary sheep.

But even legal protection hasn’t been fail-safe. Niger has been able to afford to assign only about two dozen rangers to patrol the reserve—a swath of desert roughly the size of Hungary.

In 2013 a Nigerien soldier killed an addax in the reserve (he was convicted a year later after photos of him with the dead animal showed up on the Internet). And last June, when Sahara Conservation Fund researchers conducted a ground survey of the area, they discovered the grisly remains of an addax in a military camp. When they monitored the reserve again, in November, they found only 28 fresh addax tracks. At best, this means that the addax population has split up. At worst, most of the last remaining antelopes are dead.

According to Lt. Col. Hamissou Halilou Malam Garba, chief of the division of the protected areas for the Niger Ministry of the Environment, Urban Health and Sustainable Development, soldiers won’t be shooting any more addax for fear of being arrested. “They’re very very afraid,” he said, adding that the military is now working with rangers in the nature reserve to prevent shootings.

This month the conservationists, with support from the Nigerien army, plan to conduct an aerial and ground survey—funded by the Saint Louis Zoo and International Union for the Conservation of Nature—of a large portion of the reserve and surrounding lands, hoping to get a better idea of addax numbers and where they’re concentrated. That way they’ll be able to focus protection efforts better.

They’re also trying to raise awareness by working with the government and local people, says Arnaud Greth, president of the Paris-based nonprofit Noe Conservation, which helped establish the nature reserve. “I think there’s more and more people aware of the value of wildlife,” he says. “Military poaching isn’t accepted by civil society.”

Addaxes aren’t the only animals to have suffered losses in the Sahara. According to a 2014 study, 86 percent of 14 large animal species, from Saharan cheetahs to African wild dogs, were either extinct or endangered. The culprits: habitat loss and poaching.

At one point during my conversation with Thomas Rabeil, he became wistful about the plight of the addax. “They managed to survive in very remote areas where there’s nothing,” he said. “They’re part of the magic of the desert.”

This article was first published by National Geographic on 02 Mar 2016. Lead Image: A lone addax ekes out a living out of the barren Sahara Desert in eastern Niger. Photograph by Thomas Rabeil.