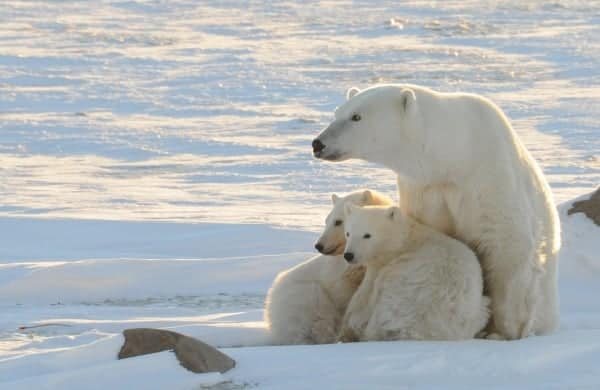 Polar bear populations are a sensitive topic for the Canadian government, which has faced international criticism for its policies on climate change and for allowing limited hunting of bears, mainly by indigenous communities.

The Canadian environment minister provoked outrage last October when she discounted abundant scientific studies of polar bear decline across the Arctic, saying her brother, a hunter, was having no trouble finding bears. Leona Aglukkaq, an Inuk, spoke of a “debate” about the existence of climate change.

“Scientists latch on to the wildlife in the north to state their case that climate change is happening and the polar bears will disappear and whatnot,” she said. “But people on the ground will say the polar bear population is quite healthy. You know, in these regions, the population has increased, in fact. Why are you [saying it’s] decreasing?” she told a meeting. “My brother is a full-time hunter who will tell you polar bear populations have increased and scientists are wrong.”

Scientists dispute this. One single polar bear population on the western shore of Hudson Bay, for example, has shrunk by nearly 10% to 850 bears in under a decade, according to the latest Canadian government estimate seen by the Guardian.

The rate of decline – and an even sharper drop in the birth and survival rate of young cubs – puts the entire population of western Hudson Bay polar bears at risk of collapse within a matter of years, scientists have warned.

“All indications are that this population could collapse in the space of a year or two if conditions got bad enough,” said Andrew Derocher, a polar bear scientist at the University of Alberta.

“In 2020, I think it is still an open bet that we are going to have polar bears in western Hudson Bay.”

The latest Canadian government estimates, which have yet to be shared with independent scientists or the public, confirm scientists’ fears that the polar bears of the western Hudson Bay have little chance of long-term survival.

In 1987, when the first reliable estimates of polar bear population were made, using a technique known as mark and recapture, there were about 1,200 bears in the western Hudson Bay area; by 2004, the figure had dropped to 935.

“Now we are somewhere in the ballpark of 850,” said Nick Lunn, an Environment Canada scientist, who is considered to be the leading expert on the polar bear population of western Hudson Bay.

“This gives us a glimpse of what may be coming down the road for other subpopulations.”

The polar bears of western Hudson Bay are at greater risk in a warming Arctic because of their relatively southern exposure. But scientists have projected two-thirds of all polar bears could disappear by 2050 under climate change.

Polar bear experts had been braced for a 10% decline in the western Hudson Bay population, based on observations about the retreat of sea ice and the deteriorating condition of polar bears, especially mothers and cubs.

The ice-free season in Hudson Bay has expanded by about a day every year for the past 30 years, reaching 143 days last year. Scientists have predicted polar bears will be unable to survive once it reaches 160 days.

Earlier break-up is forcing polar bears off the ice at their peak feeding time in the spring, when bears typically pack on two-thirds of the weight they need to survive the year.

With freeze-up occurring later each year, bears are skinnier and less healthy when it comes time to return to the ice.

“You can see their backbones and their hips and shoulder blades when they are moving and they are visibly thin,” said Ian Stirling, a wildlife biologist at the University of Alberta, who has studied the population for more than 35 years.

Scientists are already seeing the effects of that extended starvation on future generations of polar bears.

Female polar bears are now on average 88lbs lighter than they were in the early 1980s. They are having fewer cubs, and those cubs tend to be lighter, which means they have a lower rate of survival.

Stirling, who conducts aerial surveys of polar bears, said he was struck each year by the scarcity of young cubs returning to the ice in the autumn.

“There is no way a population can remain stable, if the young aren’t surviving,” said Stirling. “If the climate continues to warm, slowly and steadily, they are on the way out.”

Pretty much another bunch of lies, the Polar bears have grown in number by leaps and bounds. I was an associated with studies in 1976 and 2006. and the numbers grew but over 212% Sorry bad lies told by anti-hunters do not help the populations.