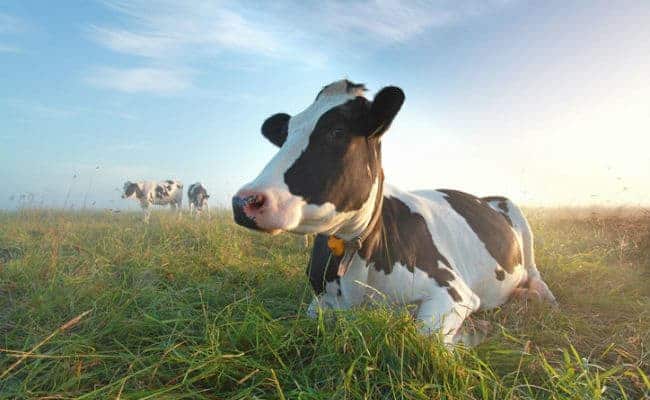 In the climate change fight, scientists are always exploring new ways to tackle our emissions problems. One recent suggestion is to, well, make cows fart and belch less — something that could be music to the ears of Irish farmers.

Researchers from James Cook University in Queensland, Australia, released a study in 2016, which appeared to support what other scientists had previously discovered: Adding seaweed, specifically Asparagopsis taxiformis, to a cow’s diet in small amounts — just two percent of total feed — may cut the animal’s methane emissions by over 90 percent.

This approach has also been tested in sheep, with similar positive results.

Cows belong to a group known as ruminant mammals. And via their four chambered stomachs, these animals can eat foods that are difficult to digest, like grass. This ingenious evolutionary trait creates a number of byproducts, though — one of which is methane.

Once in our atmosphere, this super-insulating gas has a warming effect that is 84 times more potent than carbon dioxide over the first two decades after release. Estimates suggest that methane is about 23-25 times more damaging over a 100-year period than the equivalent amount of CO2.

To put those facts into perspective, a single cow can release as much as 70 to 120 kg of methane per year. Given that the global cattle population is upwards of 1.5 billion cows, that’s a lot of methane.

This presents a massive challenge for efforts to keep global temperatures below the 2ºC rise that climate scientists have deemed our upper limit. And that’s where seaweed might come in. The seaweed solution

The prospect of reducing methane emissions from cows has been a significant source of hope for the agricultural industry, which depends on dairy and cattle farming as a main income stream.

Here at Care2, we have often discussed how industrial cattle farms tend to be terrible for animal welfare, drive antibiotic resistance and threaten the environment. This is especially holds true when cattle are fed food stuffs like corn, which actually increase methane production.

But some farmers are keen to transition to more sustainable practices.

The Irish farming body, for example, aims to become a leader in environmentally-conscious agriculture. In 2012 Ireland committed to third-party-verified, 100 percent sustainable food exports by 2016 as part of the ongoing Origin Green campaign. The effort has prompted over 55,000 Irish farmers and 122 food and drink companies to become verified members of the sustainability and development program. And a large portion of those members are involved in beef production.

Clearly, Ireland wants to use what it calls a ”sustainable grass-based model of food production” to innovate and lead. This, the farming body argues, will mean improved animal welfare and better food for people, while also minimizing environmental impact.

As such, the Irish Farming Association’s interest in seaweed as a potential solution to cattle methane seems a natural part of their plan.

The association’s environment chairman, Thomas Cooney, has reportedly asked Irish scientists “to immediately investigate the potential for this research in an Irish agriculture context, and in the context of the opportunity that may exist for indigenous seaweed production.”

Ireland has a longstanding tradition of using its naturally abundant seaweed supply to its country’s advantage, and the country produces several popular lines of seaweed products. As a result, fusing seaweed harvesting — in a sustainable manner, of course — with cattle management presents a promising avenue of research.

That said, one point of concern exists: The seaweed Asparagopsis taxiformis is an invasive species, thriving in most conditions. Introducing more of this seaweed to Irish waters isn’t without its risks, so any such operations must be carefully managed and controlled. Low methane cows as a short-term answer

While mass animal agriculture continues to pose significant risks to the environment, it’s difficult to argue with attempts to make these farming operations more sustainable. Again, no solution will be a perfect fit, but methane reduction in cows offers an exciting prospect — at least until plant-based diets gain more popularity.

Ongoing tests are examining just how scalable these methane reduction efforts may be, and results from Queensland should be published by the end of the month. Agricultural bodies across the world will be watching closely to see whether this innovation could help the industry achieve a more sustainable farming model — and it only seems appropriate that Ireland stands at the forefront of such efforts.

We invite you to share your opinion whether feeding cows seaweed could help fight climate change? Please vote and leave your comments at the bottom of this page.