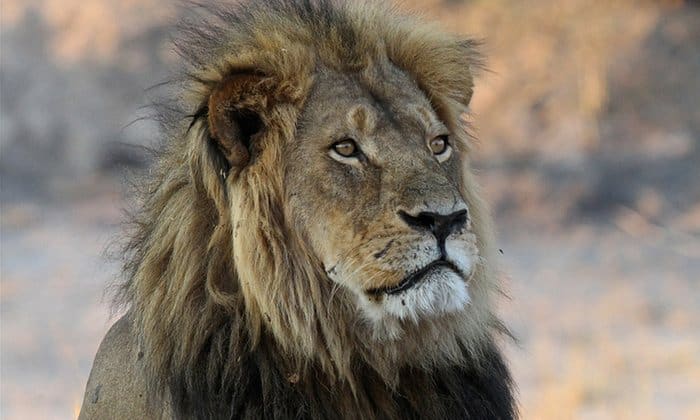 Trophy hunting could help conserve lions, according to the Oxford University scientist who had studied Cecil the lion for years before the animal was killed by an American dentist.

A new report by Prof David MacDonald for UK ministers concluded that strictly regulated hunting of lions could provide a financial incentive to protect areas of wild lion habitat from being destroyed, which is the biggest threat to the big cats. But MacDonald said the UK should ban the import of any lion trophies from hunts that failed to prove their sustainability.

The number of African lions left in the wild has plummeted in the last century and they have disappeared from more than 90% of their historic range. Just 20,000 individuals remain, fewer than the number of rhinos in Africa.

The killing of Cecil the lion in 2015 took place in contravention of Zimbabwe national park rules but criminal charges have since been dropped against those involved. Macdonald said in June that Cecil’s killing was “heartbreaking”.

However, his new report, found there was little evidence that trophy hunting of lions harmed populations on regional or national levels, although it could do so at local levels.

“The big issue here is lion conservation and how it can realistically be achieved. Whether or not I personally like lion hunting is irrelevant,” he said.

“It is unfathomable to me that there could be joy in killing them, but for me the priority is halting, indeed reversing, their decline. Currently the evidence is that trophy hunting contributes to keeping hundreds of thousands of square kilometres available to lions and other wildlife.”

Macdonald said asking whether trophy hunting has the potential to help conservation is a very different question to asking whether it is ethically acceptable. “Of course I understand if people say there are simply no circumstances under which this will be acceptable to me,” he said.

Jeffrey Flocken, from the International Fund for Animal Welfare (IFAW), said: “While we don’t agree with all of [the report’s] conclusions, it is absolutely correct that we need better vetting of trophy hunting operations, better science, and much more transparency in this debate.”

IFAW opposes trophy hunting and wants the UK to ban such imports. An IFAW report in June found that 1.7 million animal trophies had been exported in the last decade.

Macdonald’s analysis reports that areas for trophy hunting of all animals cover 1.4m sq km in Africa, 22% more land than national parks. He said it would not be possible to convert all of this to safari-based eco-tourism, as some people advocate as an alternative to hunting.

Lions are hunted over an area of 500,000 sq km, the report found, representing about a third of the land where lions occur.

Trophy hunting is estimated to raise more than $200m a year across sub-Saharan Africa, with lion hunting probably accounting for 5-17% of that, depending on the country. About 450 lion trophies are exported each year, according to data from the Convention on the Trades in Endangered Species (CITES), though some of these may be heads, teeth or skins from the same animal.

The report recommends that all hunts are overseen by expert and transparent committees that can assess the lion population and set quotas that would ensure the population is not harmed and, ideally, grows. It also said that regulations should ensure a significant amount of the money raised is used for conservation and that only accredited hunters should be used, to reduce the suffering of animals. Macdonald said some lion hunts were well managed, such as in Zimbabwe.

Flocken said: “Many of the recommendations, if implemented, would prove that the hunting industry has dictated policy based on inflated economic arguments. With trophy hunted species like lion and elephant populations crashing, we can no longer allow the killing of imperilled species for fun, based on blind faith that it’s for their own good.”

Only about three lion trophies are imported into the UK each year, but Macdonald said: “While the UK may be a very small player in this, if it is decided this was an opportunity to adopt a regulatory system which increased the likelihood of trophy hunting contributing to lion conservation, perhaps it could be a leader in encouraging other countries to do so as well.”

This article was first published by The Guardian on 05 Dec 2016.

We invite you to share your opinion whether trophy hunting could help conserve lions? Please vote and leave your comments at the bottom of this page: