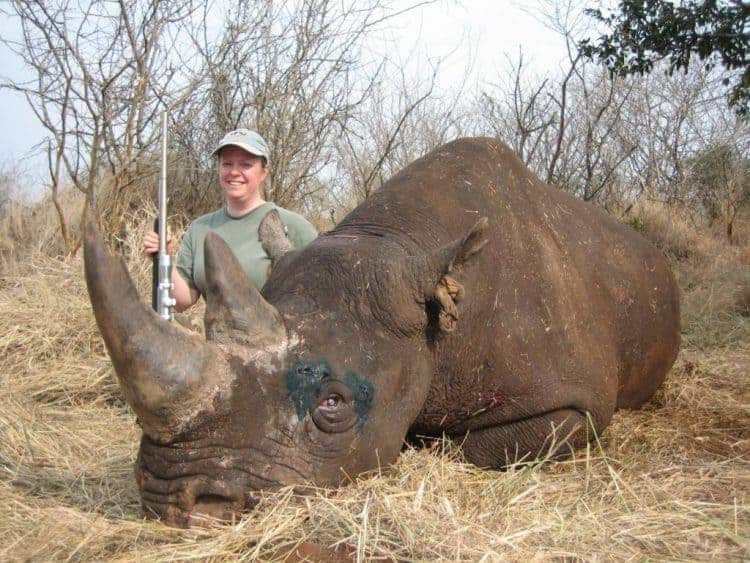 A new report released by the Humane Society International (HSI) finds that trophy hunters are “grossly” overstating the economic benefits of big game hunting in Africa.

HSI timed the release of the report to coincide with the start of Safari Club International’s (SCI) annual convention in Las Vegas, Nevada on February 1. US-based SCI, one of the world’s largest trophy hunting advocacy organizations, released a report in 2015 that claimed trophy hunting-related tourism contributes $426 million annually to the economies of eight African countries and creates more than 53,400 full- and part-time jobs.

But the HSI report, prepared by Melbourne, Australia-based consultancy Economists At Large, found that SCI had “grossly overstated the contribution of big game hunting to eight African economies and that overall tourism in Africa dwarfs trophy hunting as a source of revenue,” according to a statement.

In the eight countries studied for both reports — Botswana, Ethiopia, Mozambique, Namibia, South Africa, Tanzania, Zambia, and Zimbabwe — tourism is responsible for 2.8 to 5.1 percent of GDP, according to the HSI report.

Trophy hunting is responsible for less than $132 million — not $426 million, as SCI’s report claimed — of the $17 billion spent on tourism in those countries every year, or just 0.78 percent of total tourism spending, the HSI report’s author, economist Cameron Murray, adds. That’s an estimated 0.03 percent of GDP for those eight countries.

“In terms of the wider tourism economy, which relies heavily on wildlife resources, trophy hunting is relatively insignificant,” Murray writes.

Meanwhile, trophy hunting has a marginal impact on employment in those eight countries, as well. The HSI report states that big game hunting provides between 7,500 and 15,500 jobs. Even SCI’s estimate of the employment numbers directly and indirectly supported by the trophy hunting industry, 53,423 jobs, represents just two percent of the 2,589,000 jobs created by the tourism industry as a whole. SCI did not respond to Mongabay’s request for comment.

The HSI report points out that there are other, less quantifiable impacts of trophy hunting that must be taken into consideration, as well. Trophy hunting is detrimental to conservation efforts because hunters tend to kill the strongest animals, which are critical to maintaining a healthy gene pool. Also, hunting quotas are frequently established without a solid scientific basis underlying them, and age restrictions on hunted animals are often ignored — “so that, for example, lions are killed as juveniles before they can contribute to the genetic pool,” Murray writes.

While the SCI report cites the International Union for Conservation of Nature’s (IUCN) Species Survival Commission, which has said that, “Trophy hunting is a form of wildlife use that, when well-managed, may assist in furthering conservation objectives by creating the revenue and economic incentive for the management and conservation of the target species and its habitat, as well as supporting local livelihoods,” the HSI report counters that “corruption prevents trophy hunting funds from making it to conservation.”

The non-hunting tourism industry is growing much faster in Africa than the big game hunting industry, HSI report author Murray found: “Overall tourism spending grew by as much as the claimed direct value of the trophy hunting industry ($326 million) every four months on average in the eight study countries between 2000 and 2014.”

“For too long, trophy hunters have tried to justify their activity by falsely claiming that their killing helps local economies,” Masha Kalinina, international trade policy specialist for HSI, said in a statement.

“As this new report shows, those claims are a sham. In the African countries studied, trophy hunting contributes virtually nothing to local economies or jobs, and is dwarfed in comparison to tourism overall, including eco-safaris reliant on the very animal species whose populations hunters decimate. It’s time to stop pretending that slaughtering big game and posing for morbid selfies by their slain bodies is anything more than killing for kicks.”

This article by Mike Gaworecki was first published by Mongabay.com on 10 Feb 2017.

We invite you to share your opinion whether big game hunting is important for African economies? Please vote and leave your comments at the bottom of this page.