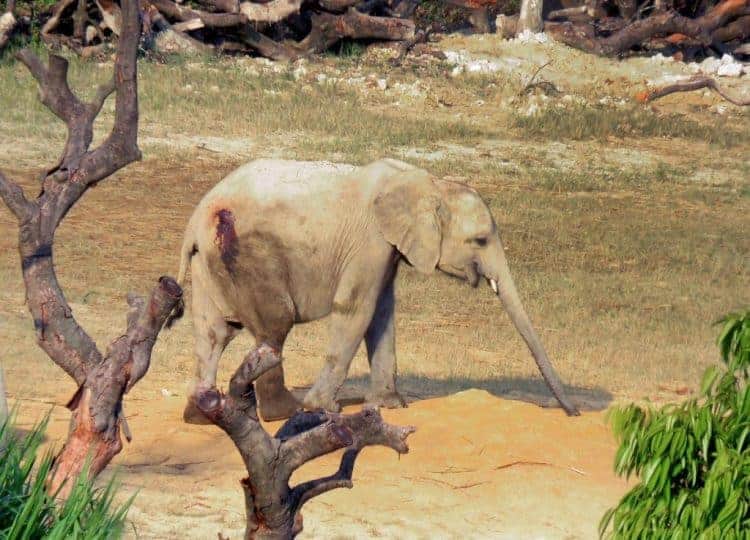 In October 2014, tens of young elephants were taken from their family groups in Zimbabwe’s Hwange National Park, where they were held in a capture unit for eight months until July 2015. That’s when 24 were flown to the Qingyuan quarantine facility in Guangdong Province before being transferred to Chimelong Safari Park, also in Guangdong.

Oppah Muchinguri, Zimbabwe’s minister of environment, water and climate, said that more of the country’s wildlife will be captured and sent to China to give them a better and safer environment, according to the China Daily. Muchinguri spoke during a visit to the Qingyuan animals and plants preservation center, Guangdong, on New Year’s Eve.

“We are happy that young African animals have been well accommodated here in China,” she said. “We are willing to export more in the years to come as it would help in the preservation of wild animals.”

In September 2015, National Geographic reported that the elephants in China were being mistreated and were slipping into poor health.

Previously, in 2012, Zimbabwe exported eight elephants to China, according to a database produced by the Convention on International Trade in Wild Species of Fauna and Flora (CITES), the international body that sets wildlife trade policy. Only four survived the journey. Another three died shortly after arriving in China, leaving only one surviving elephant.

Export of elephants is sanctioned under CITES, as long as trade in individual animals or plants doesn’t threaten the long-term survival of the species.

A 2012 Seattle Times report found that elephant births in U.S. zoos have failed to offset deaths, which will lead to the demographic extinction of the country’s zoo elephants in the next 50 years. Half the elephants documented in the study were dead by age 23, about a third of their expected life span in the wild of 50 to 60.

The report noted that the infant mortality rate for elephants in zoos is 40 percent—nearly triple the natural rate in the wild in Asia and Africa. Most had died from injury or disease associated with their captive conditions: foot and joint disease, reproductive disorders, infertility, aberrant behaviors such as infanticide.

According to Marc Bekoff, professor emeritus of ecology and evolutionary biology at the University of Colorado, Boulder, and cofounder, with Jane Goodall, of Ethologists for the Ethical Treatment of Animals, “long-term and detailed scientific research has amply demonstrated that the capture and removal of young elephants disrupts social groups and causes intense distress in the captives and those left behind.” This, he said, makes “the proposed import all the more cruel and unethical.”

But according to China Daily, Muchinguri justifies her government’s decision to export more elephants on the grounds that Zimbabwe now has too many in the wild—some 85,000 according to her estimate, which is about 40,000 more than the number reported by the African Elephant Specialist Group of the International Union for Conservation of Nature (IUCN), which produces a widely accepted international list of the conservation status of species.

“Because of the bad weather, including drought, we cannot keep the large population of elephants any longer. They consume lots of water, and they need lots of food, which we cannot afford,” Muchinguri said.

“We would rather export and sell more elephants and other animals to those willing to take care of them,” she said.

If it’s determined that an ecosystem has more elephants than it can support, taking young elephants away from their mothers and family groups and subjecting them to a captive existence would, Moss says, “be a return to practices now considered outmoded by modern wildlife managers.”

A Commitment to Wildlife Protection

During his first state visit to Zimbabwe, in November 2015, Chinese President Xi Jinping said that his country is committed to wildlife protection and will provide Zimbabwe with more assistance to help achieve it.

“China attaches great importance to wildlife protection and has made remarkable progress in wildlife habitat conservation and breeding,” Xi said while visiting a wildlife sanctuary outside the Zimbabwean capital, Harare.

China is not the only country intent on importing African elephants to zoos.

The U.S. Fish and Wildlife Service recently made public a permit request for the import of 18 wild-caught young elephants from Swaziland to the Dallas Zoo, in Texas, the Henry Doorly Zoo, in Omaha, Nebraska, and Sedgwick County Zoo, in Kansas. The decision to grant the request is imminent.

The zoos argue that there’s no safe place in Africa for the elephants to go and that by taking the elephants in, they’re contributing to the survival of the species.

But many experts, among them, Phyllis Lee, director of the Amboseli Elephant Research Project, and Joyce Poole, codirector of Elephant Voices, say that zoos “serve no credible conservation purpose.” That’s because none of the elephants or their offspring will be returned to the wild—“the gold standard of conservation.”

The view of the IUCN Specialist Group for African elephants is that captive breeding makes no effective contribution to conservation, and the group doesn’t endorse the removal of African elephants from the wild for any captive use.

As Marc Bekoff puts it: “The shameful complicity of the zoos is being sold as ‘conservation,’ when it’s nothing more than a business deal to restock zoos’ elephant exhibits.”

This article was first published by National Geographic on 01 Jan 2016.

We invite you to share your opinion whether African countries should be allowed to sell elephants to China? Please vote and leave your comments at the bottom of this page:

In the event that you voted no, please sign the petition:

Demand That Zimbabwe Exports NO MORE Young Elephants To China!