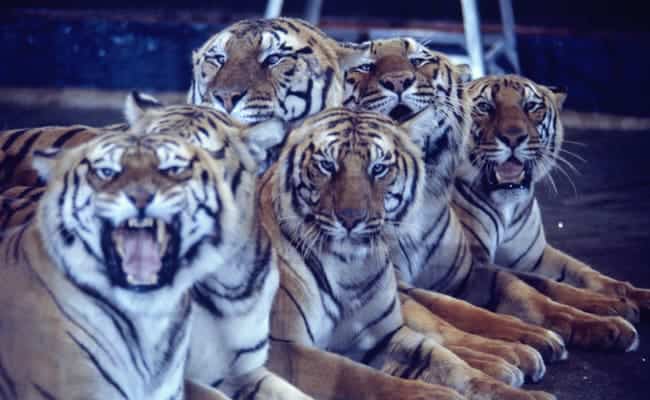 As Ringling Bros. finally closes its doors forever this week, a recent undercover investigation offers a heartbreaking reminder that many animals are still being abused and exploited by circuses across the U.S.

The investigator witnessed violent treatment toward tigers — including one instance of a trainer whipping a tiger 31 times in less than two minutes.

The Humane Society of the United States (HSUS) released the investigation, which focused on ShowMe Tigers, a traveling tiger act owned by Ryan Easley. The act is used in circuses around the country, including Carden and Shrine Circuses.

According to the investigator, the tigers were confined to 13-square foot cages while traveling — where they slept, ate and had to relieve themselves. They were never let out, except to perform, or provided with a chance to exercise.

While the investigator was present, the tigers’ exercise cage was never even unloaded from the trailer. Out of 22 days on the road, five of the tigers were denied food, and at least one tiger was denied veterinary care for an open wound on her face.

“Ryan Easley utilizes archaic training methods which entail fear, force and punishment. In my professional opinion, the tigers at ShowMe Tigers are suffering from psychological neglect and trauma on a daily basis,” said Jay Pratte, an animal-behavior expert, trainer, and wildlife consultant with 25 years of experience.

The HSUS has since filed a complaint with the U.S. Department of Agriculture and is urging the agency to investigate violations of the Animal Welfare Act and take action, but there are still many others who need help.

“While it’s true that Ringling is going out of business, other circuses are still operating and using inhumane methods of handling wild animals. There’s no excuse or rationale for whipping tigers or other wild animals for these silly performances. All circuses should end their wild animal acts,” said Wayne Pacelle, president and CEO of The HSUS.

Fortunately, as the public continues to turn against this mistreatment of animals, many countries around the world have put an end to using them as performers and there’s hope the U.S. will soon act on their behalf.

The recently reintroduced Traveling Exotic Animal and Public Safety Protection Act (TEAPSA) would finally end the use of wild and exotic animals in traveling circuses across the U.S. for good, and send a powerful message that there’s nothing entertaining about watching some of the earth’s most iconic species being forced to perform ridiculous and uncomfortable tricks for our profit and amusement.

You can help by signing and sharing the petition urging Congress to pass this landmark legislation.

We invite you to share your opinion whether all circuses with wild animals should be closed down? Please vote and leave your comments at the bottom of this page.