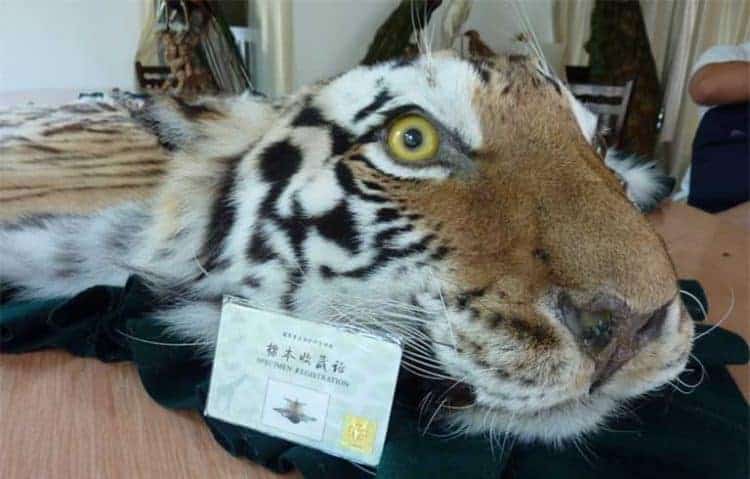 In China, around 6,000 captive tigers are raised on “farms,” often under inhumane conditions, and their pelts sold for hefty sums in a poorly regulated market upheld through legal loopholes by the Chinese government.

Breeding tigers on these farms is legal, but sale of their parts is not — something that may be about to change.

The State Forestry Administration, tasked with protecting wildlife and overseeing China’s tiger farms, is now deciding whether to commercialize tigers by adding them to a list of legally farmed wildlife, paving the way for tiger parts to be sold to supply a growing Chinese luxury market.

Some wealthy Chinese hold “visual feasts” where guests watch a tiger be killed and cooked — then eat it.

Breeding tigers for trade in their parts contravenes a 2007 decision by the Convention on International Trade in Endangered Species (CITES), a treaty signed by 183 nations, including China.

There is pressure in China and abroad to shut down tiger farms, even as Chinese business interests lobby to expand a lucrative industry.

In the next weeks, China’s State Forestry Administration (SFA) will reportedly announce whether tigers will be on a list of endangered species that can be legally farmed, like pigs and chickens, then killed and sold to satisfy the country’s growing demand for expensive tiger productsincluding tiger skins, bones, teeth and claws.

Provisions within the country’s new Wildlife Protection Law refer to captive breeding and “utilization” of wildlife. But the law, which was enacted in January, does not specify which protected species can be “utilized”— legally sold — within China. The forestry administration is currently drawing up that list, says Debbie Banks, a tiger expert with the London-based Environmental Investigation Agency (EIA).

About 6,000 tigers are currently housed on more than 200 tiger farms in China. Breeding tigers for trade in their parts and products contravenes a 2007 Decision of the Convention on International Trade in Endangered Species (CITES), an international treaty signed by 183 nations (including China).

Large-scale breeding is legal under Chinese law; trade of tiger parts is not. But a shadowy commerce uses a legal loophole: since 2004, the forestry administration has issued permits for the sale of skins from captive tigers used specifically for “educational” or “scientific” purposes. However, an undercover investigation by the EIA found rampant abuses, with taxidermists using the permits to sell tiger pelts to private customers, and reusing permits — which makes it easy to launder the skins of poached wild tigers. Some sold the pelts with no paperwork at all.

Many commercial tiger breeders front as circuses, zoos or other attractions where healthy animals are displayed for tourists. For years, conservation groups and the media have documented abysmal living conditions at these facilities, with gaunt tigers — wasted to striped skin and bone, some deformed by poor nutrition and inbreeding — often crammed into concrete-floored cages and prison-like compounds.

The cats don’t need to be healthy: they’re grown, sometimes at industrial scale, for an incredibly lucrative trade in their parts. These are the puppy mills of the tiger business, with the animals “speed-bred” by snatching cubs from their mothers soon after birth so the females can quickly produce another litter. Two of the largest breeders, housing at least 1,000 tigers each, were launched with funding from China’s State Forestry Administration — an agency tasked with protecting wildlife while also overseeing and promoting intensive tiger farming.

Tiger products have been used in traditional Chinese medicines for millennia, with nearly every part of the animal used as purported, but scientifically unproven, remedies for everything from fevers and arthritis to ulcers, nightmares, baldness and impotence.

The market for tiger-based traditional medicines skyrocketed in the 1990s in tandem with a growing Chinese middle class that could afford them. To meet this demand, wild tigers were snared, shot and poisoned in vast numbers across their range, and Chinese tiger farms grew exponentially.

The value of tiger products has continued to rise: today, they command a small fortune on the black market. But the demand has changed radically: it’s now driven by money and prestige, not medicine. Tiger products are coveted status symbols among China’s wealthiest and most powerful. Serving tiger bone wine — made by steeping a tiger skeleton in rice wine — is akin to Dom Pérignon, and collectors are stockpiling the most expensive bottles as an investment, says J.A. Mills, tiger expert and authorof Blood of the Tiger.

Tiger skins are frequently gifted to influence high-level officials or to help seal a business deal: decorating with tiger pelts is like flaunting a Rolex watch or hanging a Rembrandt. An article in the South China Morning Post reported a new status-enhancing activity that’s popular among some wealthy businessmen and bureaucrats: watching a tiger being killed and cooked and then feasting on its meat.

With rising demand — and rising prices — came increased poaching. Fewer than 4,000 wild tigers remain, with about 60 percent of those in their last real stronghold, India. In 2016, tiger poaching rose to the highest level in 15 years in India.

Chinese delegates conceded at a 2014 CITES meeting that they were indeed licensing the skin trade, though they did not reveal how many permits they were issuing. In 2015, they also admitted that they don’t have the capacity to monitor the trade, says Banks. Officials have made no comment concerning wineries in China that are producing tiger bone wine — despite a 1993 ban on the sale of tiger bones. There are a lot of unanswered questions, Banks says.

If the forestry administration lists tigers under the newly-revamped wildlife law, responsibility for licenses will be transferred from the federal government to the provinces, with even less oversight. “This is already a tragedy for tigers and a disaster for wild tigers, but this will take a bad situation and make it worse,” she says.

Meanwhile, the tiger farming issue has been raised, possibly for the first time ever, at yearly high-level meetings in Bejing. Yuan Xikun, a member of the Chinese People’s Political Consultative Conference, introduced a resolution requesting that commercial tiger breeding facilities be closed down, citing the negative impact on wild tiger conservation, damage to the country’s reputation and multiple violations of national laws.

Will that high-level government discussion keep tigers off the State Forestry Administration’s “utilization” list? It might, if China’s captive tigers also quickly gain attention and sympathy from other Chinese political leaders, from world governments, the international and Chinese media, and global conservation organizations, Banks says. “For us, this is a beacon of hope.”

Neither Chinese CITES representatives nor the State Forestry Administration responded to requests for comment for this story.

This article by Sharon Guynap was first published by Mongabay.com on 10 Mar 2017.

We invite you to share your opinion whether all tiger farms in China should be closed down? Please vote and leave your comments at the bottom of this page.