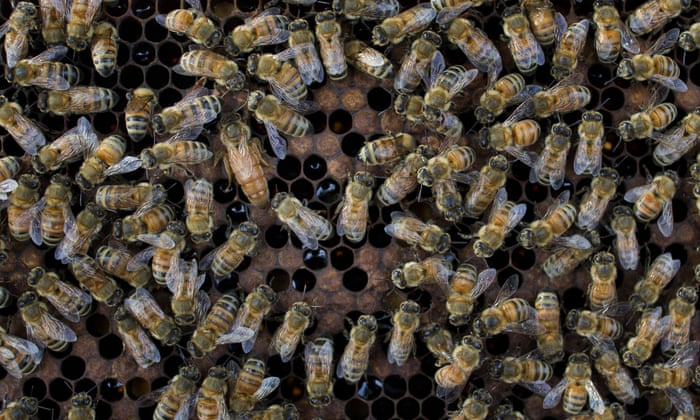 Huddled around their hives, beekeepers around the south-eastern US fear a new threat to their livelihood: a fine mist beaded with neurotoxin, sprayed from the sky by officials at war with mosquitos that carry the Zika virus.

Earlier this week, South Carolina beekeepers found millions of dead honey bees carpeting their apiaries, killed by an insecticide. Video posted by a beekeeper to Facebook showed thousands of dead insects heaped around hives, while a few survivors struggled to move the bodies of fellow bees.

“This is what’s left of Flowertown Bees,” a despondent keeper says in the video. Company co-owner Juanita Stanley told the Associated Press her farm looked “like it’s been nuked” and estimated 2.5 million bees were killed.

In another Facebook post, South Carolina hobbyist Andrew Macke wrote that he had lost “thousands upon thousands of bees” and that the spraying had devastated his business. “Have we lost our mind,” he wrote, “spraying poison from the sky?”

Around the US, bees and other pollinators contribute an estimated $29bn to farm income. Clemson University’s department of pesticide regulation is investigating the incident.

The program head, Dr Mike Weyman, said that though South Carolina has strict rules about protecting pollinators, county officials were using the neurotoxin, Naled, under a clause exempting them in a “clear and public health crisis”.

More than three dozen people have tested positive for Zika in South Carolina, Weyman said, and officials have made it a priority to prevent local transmissions through the Aedes aegypti mosquito.

“We don’t want one of those mosquitos having a blood meal on an individual we’ve already determined was positive,” Weyman said. “We know beyond a shadow of a doubt that [Zika] is up and running in Florida. If it gets in the mosquito population … you’re playing catch-up.”

South Carolina’s protocol for Zika infections is to alert local officials of a carrier’s residence, which they “consider a ground zero”, Weyman said. Local authorities then target the local mosquitos in a 200-yard radius, in this case with spray.

Flowertown Bees was listed on local records but not in the state’s voluntary registry of pollinators, according to Weyman. “We know where the big ones are,” he said, “but as you can see this was a fairly large operation and almost right smack dab in the spray path.”

If regulation allowed some spraying that would kill half of your livestock overnight, how would you recover?

Despite the investigation into what went wrong, the killing has beekeepers worried about what might happen next.

“Everyone that I’ve spoken to has major concerns about the effect” of insecticides, said Jennifer Holmes, vice-president of the Florida State Beekeepers Association and the co-owner of a company with about 300 colonies north of West Palm Beach.

Comparing bees to cows or other pillars of agriculture, she said: “If there was a regulation that allowed some spraying that would kill half of your livestock overnight, how would recover your livelihood?”

Holmes has spent the last week working with beekeepers and state and county officials. The keepers, she said, fear “not just the immediate die-offs, but possible genetic die-offs or sterility” for bees that survive the first sprays.

“We understand the serious threat of possible disease,” she said, “but we also have to maintain our agricultural livelihood.”

A Louisiana beekeeper, who requested anonymity because of work with county officials, added another set of concerns: careless mixture and application of chemicals, mismanagement and long-term imbalance in the ecosystem.

“Chemical application of any sort creates an imbalance from the ground up, even if a simple mosquito is the target.”

‘We always have the environment in mind’

Experts at the Centers for Disease Control and Prevention (CDC), the Environmental Protection Agency (EPA) and independent universities say Naled is far safer than other chemicals. It breaks down rapidly and, in the very low doses at which it is prescribed, should not pose a risk to humans.

“In Louisiana, we use these products quite frequently to reduce mosquitos, but we don’t see many nontarget effects, because the doses are really small,” said Dr Kirsten Healy, a public health entomologist at Louisiana State University.

“A lot of people don’t realize that we always have the environment in mind. We try to have products that have the lowest possible impact.”

Even the mosquitos targeted “quickly bounce back”, she said. Healy recommended a multi-pronged approach: aerial and ground sprays along with removal of the trash cans, bird feeders and other containers where water pools and mosquitos breed.

Aerial sprays threaten other pollinators. Dennis Olle, director of conservation programs for the North American Butterfly Association, noted the effect of chaotic ocean winds near his office in Miami. “It’s aerial bombing without any sense of being able to lay the chemical down on the target,” he said.

It kills everything. There’s no question it is highly, highly deleterious to butterflies and other arthropods

Olle conceded that that he was not a scientist – he is an attorney – but described a 2015 Florida International University study that found Naled application was uneven and harmful to butterflies.

“It kills everything,” he said. “There’s no question that it is highly, highly deleterious to butterflies and other arthropods, even mammals in high enough doses.”

He agreed that door-to-door removal of breeding objects and hand spraying were effective techniques against mosquitos, but worried about repeated low doses of chemicals to both pollinators and his children.

“If they’re killing every mosquito, as they claim, everything else needs to be worried too,” he said. “That’s not rocket science, that’s common sense.”

Olle’s fears have sympathizers in Florida and Puerto Rico, where there have been, respectively, 35 and 13,791 mosquito infections of the Zika virus. Earlier this summer on Puerto Rico, doctors rallied against Naled when the CDC made a last-ditch plea to start spraying. Governor Alejandro García Padilla rejected the proposal in July, citing concerns over possible side effects on humans and other animals.

Puerto Rico was also the site of some of what limited Naled-mosquito research has been performed in the last 30 years. Dr Duane Gubler, a professor at Duke Medical School and an expert in infectious diseases, led that research and found that Naled had mixed results.

“It’s unpredictable,” Gubler said. “We did the whole city of San Juan and it appeared to be somewhat effective in some areas but not others.”

Aedes aegypti mosquitos, Gubler said, were especially difficult targets since they breed inside and under houses, in buckets, tires, puddles or any container with stagnant water.

“There’s some data from Florida that suggests it can be effective where Aedes aegypti mosquitos are primarily outdoor breeders,” he said, “but from my data, it was spotty.”

Like Healy, Gubler recommended a mix of techniques – targeting adults and larvae through habitats and sprays and a partnership between citizens and agencies. “It’s near impossible for any government agency to control all of the mosquitos,” he said.

“It’s a matter of weighing the benefits versus the risks,” he added, noting the critical place of bees, especially, in keeping crops growing.

“If you have to make a decision on whether it protects, say, your pregnant wife from being exposed versus killing a few butterflies, I suspect in most people’s minds it’s probably worth the risk.”

This article was first published by The Guardian on 04 Sep 2016.

We invite you to share your opinion whether anti-Zika toxin should be sprayed over public areas? Please vote and leave your comments at the bottom of this page: