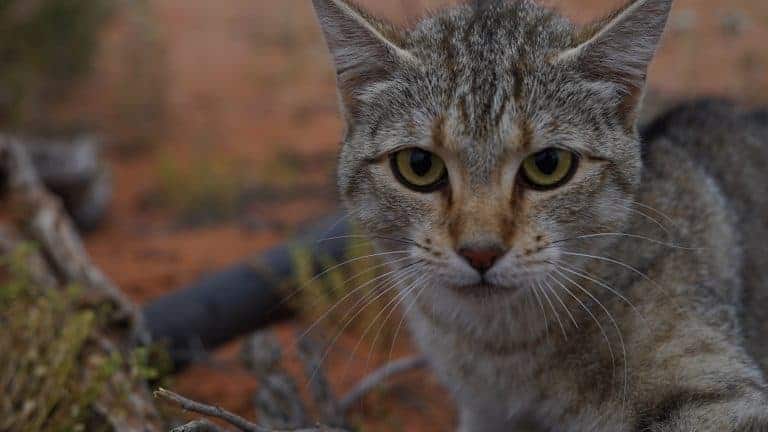 Feral cats now inhabit virtually the entire Australian landscape, and have been implicated in multiple recent mammal extinctions by conservationists. Illuminating the urgency of controlling cat populations across the continent, a new study in Biological Conservation finds that cats occupy over 99.8% of Australia.

The study was conducted by over forty scientists—led by wildlife ecologists Dr. Sarah Legge, Professor John Woinarski, and Dr. Brett Murphy of the National Environmental Science Programme’s Threatened Species Recovery Hub — and adds to a growing number of reports regarding the dangers feral cats pose to wildlife. At least 30 species of native mammals have gone extinct from Australia over the last 200 years following the arrival of European colonists with their deadly passengers.

“Our fauna didn’t evolve with cats or anything like a cat, so they are not adapted to cope with this sort of predator,” explained Legge.

In Australia today, feral cats leave virtually zero room for vulnerable native species to persist. However, their populations are notoriously difficult to assess because of their nocturnal and cryptic lifestyles. To answer the question of just how many cats, Dr. Legge and her colleagues analyzed over 90 field studies from across Australia, concluding that the overall feline population size fluctuates between roughly 2.1 and 6.3 million cats – numbers decrease across inland Australia following periods of drought, and increase during wet periods. For perspective, that’s roughly one cat for every four people when their numbers spike during rainy periods.

Prior to European settlement in the 18th century, Australia remained an exotic wilderness thoroughly stranger than fiction. Its vibrant indigenous culture reaching back to as early as 60,000 years ago; its landscape accentuated by a menagerie of animals found only in Australia. British colonists arriving in 1788 must’ve foreseen the words of the famous British evolutionary biologist, J.B.S. Haldane, who famously said over a century later, “My own suspicion is that the Universe is not only queerer than we suppose, but queerer than we can suppose.”

“Mammals are the most susceptible group… We suspect, though, that both birds and reptiles have also been heavily impacted by cats, but the evidence for this is harder to collate,” Legge said.

At the time, Europeans could not have realized how devastating their arrival would prove to native wildlife. It was common in the 18th Century for European ships to carry cats to help control rat populations onboard. Inevitably, when ships landed in places like Australia with no native cats – or other natural predators to keep them in check – these small feline passengers wasted no time wreaking havoc on rare and exotic fauna lacking evolutionary adaptations to deal with such predators.

Indeed, a recent genetic study published in Ecology and Evolution linked modern feral cat populations in Hawaii and Australia back to Europe, confirming what many biologists have suggested for a long time.

“Not only are they bad at recognizing and evading feral cats, Australian mammals also have much slower reproductive rates than mammals in many other parts of the world,” said Legge. She added that cats also “out-reproduce” native mammals.

A disappearing native fauna in Australia is especially alarming given the fact that the majority of these animals occur nowhere else in the world.

Long considered “hot spots” for biodiversity, islands and isolated landmasses such as Australia are home to remarkably high proportions of endemic species relative to larger continents. Over millions of years, the relative isolation offered by these areas gives rise to distinct genetic characteristics and highly specialized biological adaptations, and as a result, high levels of endemism.

A 2011 study published in Global Change Biology suggests they’ve contributed to 14% of the recent extinctions of mammals, birds, and reptiles on islands. It’s no wonder that in their study, Legge and her colleagues warn that feral cats are “one of the world’s most damaging invasive species.”

As the study notes, previous estimates placed the feral cat population in Australia at roughly 18 million, but were not properly tested or supported by peer review. In response, the Australian government recently announced an ambitious conservation target to cull at least two million feral cats by 2020.

Legge and her colleagues warn that such a broad-scale target could prove ineffective for a number of reasons. Certain areas tend to support higher densities of feral cats and may act as sources of expansion during extended wet periods. For example, in areas such as garbage dumps or large agricultural operations alternative food sources allow cats to maintain high densities regardless of prey availability.

“It may be more beneficial for Australian biodiversity if relatively few feral cats are eradicated from small areas of high conservation value while cats remain widespread and abundant elsewhere, than if the feral cat population was more substantially reduced overall but not eradicated from those important areas,” the paper argues.

In other words, culling two million cats won’t do much to help native wildlife unless guided by sound research and executed in the proper areas.

Feral cat populations aren’t any easier to control than they are to assess. Legge and her colleagues alarmingly reported that “…the similarity of cat densities between reserved and unreserved areas indicates that for cat-susceptible wildlife, the Australian reserve system is unlikely to provide sufficient conservation security, and that [native species] will continue to disappear from reserves unless those reserves are managed with intensive control of feral cats.”

Until effective control measures are developed that can be implemented across large landscapes, the most straightforward strategy for preventing further extinctions appears to be protecting areas that are currently without cats to provide safe havens for sensitive native species.

Moving forward, it will be crucial to engage public support for the initiative.

To this point, Legge appeared confident that a consensus is within reach.

She noted that owning pet cats is certainly not a bad thing, but emphasized that it’s crucial they be managed properly to minimize harm for other animals. Owners can help by keeping them indoors or within a confined and protected area outside, or on a leash during walks. Most importantly, owners should ensure that they’re spayed or neutered before reaching sexual maturity.

“Feral cats are wreaking havoc on Australian wildlife; it’s not their fault – we brought them here, and they’re just doing what they do best,” Legge observed. “But in bringing cats to Australia we created a problem that we now have to set straight, because numbats, quolls, woylies and bandicoots are paying the price for our mistake.”

It’s nearly impossible to overstate the impacts of feral cats on native wildlife populations. Effective solutions remain far away for Australia , but studies like this provide a foundation on which to take the necessary steps toward a less hostile environment for our native faunas.

Legge reflected, “We have a responsibility to maintain nature’s integrity and beauty for the sake of future generations, and indeed all living things.”

This article by Matt Reed was first published on 27 Feb 2017.

We invite you to share your opinion whether Australia’s feral cats should be culled? Please vote and leave your comments at the bottom of this page.