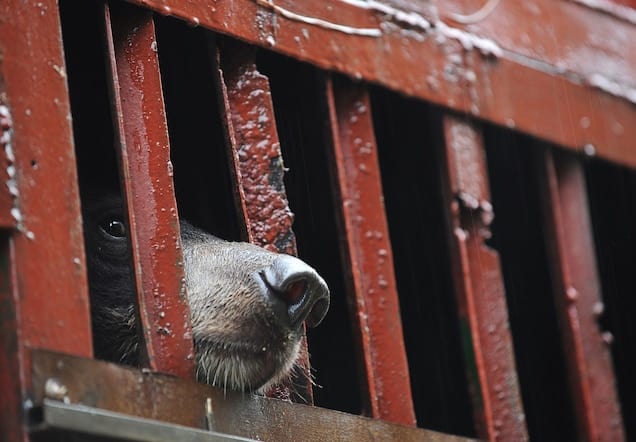 The bear bile industry targets mostly sun bears and Asiatic black bears, also known as moon bears, which both get their names from the tuft of white hair on their chests. The bears’ gallbladders contain a yellow liquid—bile—that helps them digest fat.

People have used this bile in Asian medicine for more than a thousand years. Research shows that it can help treat some liver conditions (though alternatives abound), but bile has no proven benefit for other conditions it’s widely sold to fix—everything from cancer to hangovers.

“From a welfare perspective, the bear farms are a nightmare,” Chris Shepherd, the Southeast Asia regional director for TRAFFIC, the network that monitors the wildlife trade, wrote in an email.

The bears are deprived of social interactions and are poorly treated, he said. Some unlucky bears are confined to “crush” cages so tight they can hardly move.

A reporter for the Telegraph described watching a farmer in Laos hoist a drugged bear onto an operating table and tie its paws to each corner before using a “draining apparatus” to withdraw the bile, which he priced at $15 for less than a third of a teaspoon. Other bears live with a catheter permanently hooked up to their gallbladders, according to the Telegraph.

Asian countries have long touted the farms as a way to relieve pressure on wild bears traditionally poached for the bile trade. Korea developed the first one in 1980, and then they became popular in China and Vietnam. Today China, the main consumer of bear bile, keeps more than 10,000 bears in farms, a legal practice in the country.

But in Laos the business is relatively new. When neighboring Vietnam outlawed bile farming in 2006, people began moving their operations over the border to impoverished Laos. Although the Laotian government banned owning, hunting, and capturing wild bears, weak enforcement has enabled illegal farms to thrive. A study found that the number of bears in Laotian bile-extraction facilities had increased from 40 in 2008 to 122 in 2012.

The researchers determined that most of those bears had either been plucked from the wild or transported from Vietnam, where illegal farms tend to use wild stock. No facilities appeared capable of breeding bears, with all but one keeping the animals in individual enclosures. “This industry is likely to contribute to the decline of national wild bear populations by stimulating the market for wild bear bile and increasing the incentive to poach wild bears,” the researchers wrote.

In fact no countries have shown that farms enhance bear conservation, according to the study. Considered vulnerable, both species have vanished from much of their former range—mainly because of habitat destruction and the illegal trade in bears and their parts. Exact population numbers don’t exist, but today there may be no more than 25,000 Asiatic bears in the wild.

Efforts to increase enforcement capacity are in the works, says Bounmy Savath, deputy director of the Luang Prabang Department of Forestry in Laos. But conservationists rescued a record number of bears this year and worry that the situation will only get worse. “Our concern is that there’s the potential for the industry to explode in Laos,” says Luke Nicholson, Laos program director for Free the Bears.

This article was first published by National Geographic on 05 May 2016. Lead Image: An Asiatic black bear rides on a truck to a sanctuary in Vietnam. It was rescued from an illegal bile farm.
PHOTOGRPAH BY HOANG DINH NAM, AFP, GETTY IMAGES.

We invite you to share your opinion whether bear-bile farming should be banned? Please vote and leave your comments at the bottom of this page: