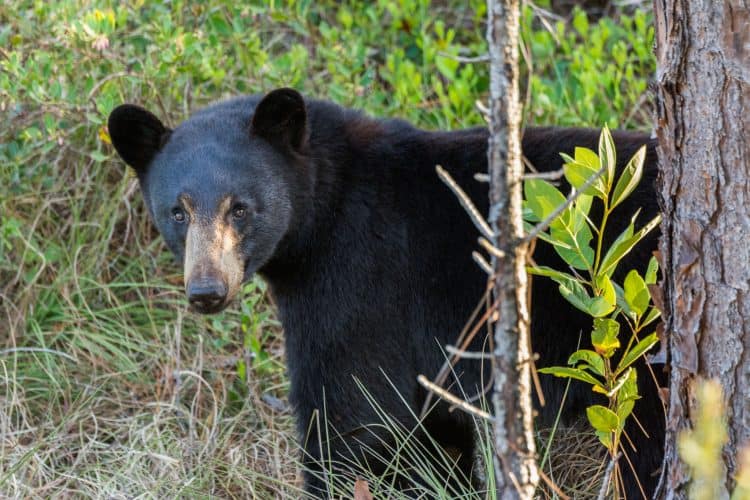 In the age of the Anthropocene, is it really possible, long-term, to sustain growing numbers of human beings and wildlife predators on landscapes already crowded—and likely to be left literally shrunken in decades ahead by climate change?

The experiment is now playing out across the peninsula of Florida, the third most populous state in America. There, rising numbers of black bears coupled with increasing human-bruin conflicts have fueled a contentious debate over the appropriate role of hunting.

Only eight months after Florida staged its first sport hunt of black bears in 21 years, the state wildlife commission on June 22, 2016 reversed course, suspending recreational killing of bruins until at least 2017.

“I think it’s entirely appropriate to push the pause button,” he tells National Geographic. “If we are going to have black bears hunted in Florida, we need to do a better job of showing where hunting fits in as a legitimate tool for sustainable management. I believe it can be.”

The recovery of Florida’s black bear subspecies, Ursus americanus floridanus, is considered a major success story in wildlife conservation, often referenced in parallel, nationally, to the comeback of grizzly bears in the Greater Yellowstone ecosystem out West.

The boom convinced Florida wildlife officials to allow sport hunting of bears last fall with rifles, shotguns, muzzleloaders, and bows, which in turn set off a welter of hurricane-strength opposition, especially from urban Floridians. Simultaneously, hunters enthusiastically lined up to buy 3,778 permits to take 320 bruins.

Watch: These black bears are ending hibernation early. What does it mean?

“I definitely support the state bringing back a bear season and believe it’s necessary, but I don’t think it’s going to work out as planned,” McNaughton said, expressing worry that inexperienced hunters might do things that incited a backlash.

“It’s going to take several years before they work the kinks out and there will be times when it’s not pretty,” he noted.

Scheduled to last a week, the 2015 hunt was abruptly stopped after just 48 hours when harvest limits were quickly surpassed in two of four bear hunting zones. In the Panhandle unit alone, hunters bagged 113 bruins in a zone with a quota of 40.

A total of 304 bears overall were harvested. When the public learned baits had been used illegally to lure bears into firing range, that cubs had been shot, and mother bears still nursing cubs also felled, outrage soared.

Protests continued this spring in several cities across the state. Many were led by Adam Sugalski, a commercial graphic artist, founder of Stop the Florida Bear Hunt, and a handgun owner.

“We’re not just a bunch of scrawny granolas who believe there shouldn’t be bear hunting,” Sugalski said. “We’ve got doctors, lawyers, developers, state senators, an ex-Navy sub commander, soccer moms, and a wide range of others lined up with us.”

Several county and city commissions, he notes, passed resolutions calling for hunting to be halted. Of 40,000 comments submitted in response to the 2015 hunt plan, 75 percent were against it, reflecting results of a poll that showed two-thirds opposition.

Still, spirited disagreement erupted between hunters and non-hunters in every major newspaper.

By choice and necessity, Floridians are accustomed to dwelling in close proximity to meat-eating wildlife. Along the coastlines there are sharks; in the freshwater swamps and creeks alligators; and roaming the southern tier of the peninsula a remnant and seriously imperiled population of panthers.

“But in terms of having charismatic animals in our midst, nothing really compares to black bears,” Yablonski says. “They generate excitement and emotions with them run high.”

“We strongly advocated for the decision [the commission] ultimately made, to step back and take a deep breath, and we believe it was justified based on the problems that happened with the 2015 hunt,” says Elizabeth Fleming, senior Florida representative for Defenders of Wildlife. The time-out position was shared by the Florida Wildlife Federation.

Fleming says strong evidence suggests that most conflicts come from bears wandering into the suburbs and becoming habituated to eating human trash, seed in bird feeders, and pet food. Bears that rely on unnatural edibles become more aggressive and can present a threat to people and property.

She cited four recent bear maulings, including one involving a 15-year-old girl walking her dog near the Apalachicola National Forest. Four bears were captured and euthanized as a result.

In addition to that attack, three people were mauled in the suburbs near Orlando in central Florida, which has the most robust bear population in the state. A generation ago state wildlife officials would typically respond to a few hundred bear incidents a year. Today the number surpasses 6,000.

“Bears have begun seeing human neighborhoods as part of their territory,” says Fleming, pointing out the irony that in fact it’s as much about people invading the woods as bears leaving them.

Sugalski says that yes, bears can be dangerous, but there’s irrational fear surrounding them.

“Whenever there are stories about bear attacks in the news, they’re often portrayed as voracious apex predators coming out of the woods ready to eat people. If that were the case, we’d have a lot more injured people,” he says.

Yablonski agrees that with hunting temporarily taken off the table, the main focus should now be on how to decrease conflicts.

“Most of the conflicts that occur are preventable,” Sugalski says, claiming that shooting bears isn’t the answer.

An important action that can help bears is restricting the harvest of palmetto berries growing in the wild. In poor berry years, conflicts have sometimes surged.

Thomas Eason, the state’s habitat and species conservation director, has said that new bear births are outpacing deaths to the point that hundreds of bears can be available for harvest. But critics wonder, for how long?

Hundreds of bears die every year from vehicle collisions on Florida’s busy roadways. There is huge disagreement about whether bear numbers can continue to grow—let alone be sustained—if roughly 10 percent of the state’s bears are also taken by hunters.

The state’s scientific position supporting the bear hunt, based on the recommendation of a blue-ribbon panel, is sound, Yablonski says. “Of the 41 states with resident bear populations, 32 of them have populations over 600 bears and conduct hunts,” the state noted in writing, justifying the 2015 hunt. “Many of these states have had bear hunting for decades, and every state with a bear hunt has stable to increasing bear populations.”

Although bears are found on over 16 million acres of habitat in Florida, they endure in scattered sub-populations geographically isolated from one another and that increases the chances of small clusters of bears disappearing.

All bears, independent scientists say, are not equal. Different kinds of bears matter, including bears that are tolerant of people and capable of discreetly navigating the interface of civilization and wild habitat without coming into conflict with people.

Mothers wise in those ways impart such knowledge to their cubs. If those parents are killed indiscriminately and replaced with bears that aren’t as savvy, conflicts could increase, experts say.

During the 1970s black bears inhabited about 17 percent of their historic range. Today they occupy 40 percent. Yablonski says there are still federal and state public lands in Florida suitable for bears and he believes that achieving connectivity between isolated sub-populations is possible.

Reed Noss, a Floridian and leading authority in the field of conservation biology, does not share Yablonski’s optimism and says development and human population trends in the state will only continue to further fragment wildlands, making establishment of natural dispersal corridors for bears highly unlikely.

Within 30 years, Florida’s human population, according to census data, is conservatively projected to add another seven million people, more than a 30 percent increase. More than bullets, the real enemy of bears is sprawl.

“The strong trend of humans moving into bear habitat is well documented and can be seen by anyone who views a series of historical aerial photographs, such as in Google Earth,” Noss explains. “Humans have invaded and continue to invade bear habitat—that is the fundamental issue in this case. To penalize bears for human invasion of their habitat [by hunting them] is irrational and unethical.”

Moreover, he says there is no compelling or scientifically valid argument that harvest of bears will reduce human-bear conflicts in the suburbs and rural-urban interface, clashes likely caused not by bears being pushed out of wildlands into civilization due to high bear densities, but bruins being lured out by available unnatural foods.

Three other independent scientists—Matthew Aresco, Joseph Guthrie, and Joseph Travis—expressed similar views in a nine-page letter to the commission and called upon the state to create new sanctuaries to give wild bears more refuge.

While there may be more bruins today, suggestions the population will continue to rise are dubious, Noss says. Sooner or later the natural carrying capacity for bears will be in decline. And if climate change scenarios play out, rising seas will force people to leave coastal areas and resettle in the Florida interior, squeezing the last bastions of sound bear habitat even more.

“Management must have an end or an objective,” Noss says. “Is instituting a bear hunting season just to please a few sport hunters a legitimate management objective in today’s world of unprecedented habitat loss and wildlife declines?”

For Yablonski, a political appointee and a self-described lover of wildlife, the huge outpouring of interest from people desiring bear tags shows the hunting constituency isn’t small. The challenge, he explains, is how to smartly deal with the reality of wildlife issues in the here and now.

“Sometimes I think it is entirely appropriate to be more conservative than what the science says,” he says, noting that he and commission colleagues actually overruled the recommendation of department staff biologists who thought the hunt should take place again this fall.

“Ultimately, this isn’t a popularity contest or a decision based only on science,” says Yablonski. “It’s a policy call based on all of the facts as we know them to be true.”

Still, he knows that looming on the horizon a rising tide of human beings and seas could forever alter the semi-wild landscape of Florida.

For him doing what’s best for bruins and people will be resurrected again later this year: To hunt or not to hunt in 2017—that will be the contentious question.

This article was first published by National Geographic on 28 Jun 2016.

We invite you to share your opinion whether bear hunting in Florida should be kept on hold? Please vote and leave your comments at the bottom of this page:

In the event that you voted to keep bear hunting in Florida on hold, please sign the petition:

Bears are highly intelligent, much much more peaceful than insecure white men who love to kill, maim and abuse wildlife. ORGANIZE to change the funding of state and federal agencies from killing licenses as the main funding mechanism to DEMOCRATIC general public funding we already bring to state tax coffers 10-40 times more than killing licenses! We can only expect to see the other half of the world's wildlife destroyed if we do not make this reform.

Yes!! for ever!!
And those people in the video, should have either got back in their cars, or ""stood still"" to the side, to let the Mom and her Babies figure out where they were going!!!. Stupid Asses!!!. Those bears couldn't very well jump over the side, to their deaths!!!. Geez some people piss me off!!!

if you want to hunt, build a time machine and go back to the stone age!!!!