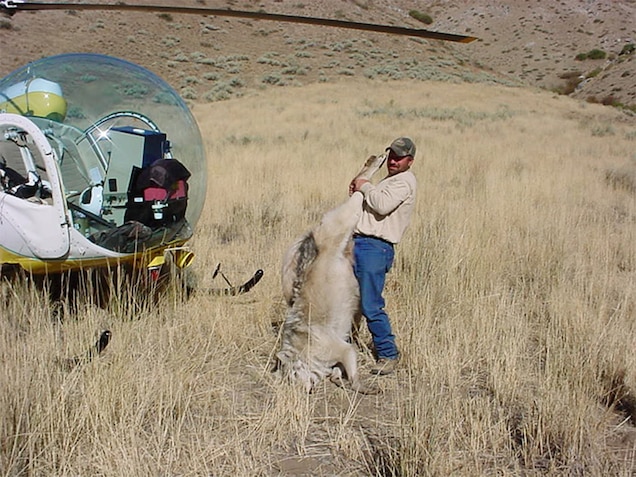 Wildlife Services is a federal agency under the U.S. Department of Agriculture, and it specializes in killing wild animals that threaten livestock—especially predators such as coyotes, wolves, and cougars. Outside the ranching community, few have heard of Wildlife Services.

Since 2000, the agency has killed at least two million mammals and 15 million birds. Although it’s main focus is predator control in the West, Wildlife Services also does things like bird control nationwide at airports to prevent crashes and feral pig control in the South.

Reporter Christopher Ketcham’s investigation, out this month in Harper’s Magazine, doesn’t mince words. The article is called “The Rogue Agency: A USDA program that tortures dogs and kills endangered species.” Ketcham exposes Wildlife Service’s use of poisoned bait, neck snares, leghold traps (which are banned in 80 countries), aerial gunning, and cyanide traps to go after animals that have attacked, or allegedly attacked, livestock grazing on public lands. Ketcham’s sources—former Wildlife Services trappers—told him they’ve witnessed or participated in these practices themselves and that theygo on to this day.

Ranchers who graze their cattle and sheep on public lands say the service is vital, that they couldn’t sustain their operations without “taking care of the predation,” as rancher John Peavey in Idaho told Ketcham. If livestock get killed, ranchers are entitled to full compensation for the dead animal, Ketcham says, plus they can call in Wildlife Services to take out the predator.

But in most cases, the article notes, killing predators is not a scientifically sound wildlife control method. Killing an adult male mountain lion, for example, tends to lead to more attacks on livestock because that established male kept out the more aggressive teenagers.

Studies have shown that this is true for wolves and black bears too. And as for coyotes—an ecologist found that where coyotes are culled, more pups in a given litter are likely to survive. That’s why even though Wildlife Services has killed nearly a million coyotes in the past decade, their numbers always bounce back.

Ketcham’s reporting tells of indiscriminate killing and inhumane methods—from family pets getting stuck in traps to the use of poison that causes a slow and painful death. Ketcham’s report also raises questions about how America’s public land is being managed, land that exists as much for the coyotes as for the ranchers, as much for the hikers and their dogs as for the fishermen and deer hunters.

It’s an issue that Ketcham, who’s currently a fellow at MIT’s Knight Science Journalism Program, has spent years investigating, and one he’s passionate about. He spoke to Wildlife Watch earlier this week.

The headline is pretty strong: “The Rogue Agency.” Can you explain?

Congressman Peter DeFazio would tell you that it’s unaccountable and secretive. He has tried to get information about its finances and its operations, and he couldn’t get it.

Wildlife Services seems to be freely violating their directives, especially when it comes to the EPA’s rules on the use of pesticides. [A whistleblower Ketcham interviewed filed a complaint about how some supervisors would help employees cheat on their tests to get certified to use poison in the field.] They appear not to be operating with any kind of science-based system to justify their lethal control against wildlife. And when their own trappers are found to be committing what appear to be cruel and inhumane acts against wildlife, nothing happens to those trappers.

Since its founding in 1885, Wildlife Services has served one purpose—to clean up the American West for the ranching industry, so they wouldn’t have to deal with predators or other animals they deemed pests. There’s an old ethos in the ranching community—control and domination of the landscape. It’s an almost biblical mandate to dominate the natural world.

Why has hardly anyone heard of this agency?

These are not people who are forthcoming about information. I spent a year working on this story, and contacted Wildlife Services multiple times to ask to go out in the field with a trapper to observe their lethal control operations. They never granted me that request, claiming it would endanger me. Then I sent them a list of 35 questions, almost none of which were directly answered. If they’re not going to a respond to an informational request from a senior congressman in the House, do you think they’re going to answer a reporter?

You interviewed a former Wildlife Services trapper, Carter Niemeyer, who said ranchers refuse to accept the true cost of their business model. What does he mean by that?

Ranchers who run their livestock on public land impose a huge cost on the public in terms of direct subsidies provided by the federal government, and also via indirect subsidies like the government’s predator control programs. Take the case of Idaho sheep rancher John Peavey. He tells me that to feed his cattle with a haying outfit on private land would cost hundreds of thousands of dollars. When he lets his sheep out to graze on public grass, that’s hundreds of thousands of dollars he keeps in his pocket. How he turns a profit, then, is by feeding off the taxpayer—a common loathsome practice of business known as corporate socialism. He also imposes a cost on the public’s wildlife: He has them killed to ensure the safety of his animals. Accepting the real cost of running livestock in the backcountry of the public domain would mean accepting that when you put defenseless domesticated animals out into the wild, they are occasionally going to get eaten. And you have to also accept that wolves have every right to eat them. It’s their land too.

What do you want people to take away from this?

The public needs to be outraged, needs to take action. That means creating a countervailing public interest to the dominant special interest of the livestock industry. If there’s any sort of trouble on public lands that affects ranchers in any minor way, that stockman calls his congressman, calls his county commissioner, calls his councilman. He gets in their office, gets in their face, and starts yelling. We need a countervailing representative like that for the public interest, for the wild.

This article was first published by National Geographic on 12 Feb 2016. Lead Image: A Wildlife Services trapper in Idaho holds a wolf shot from the air. Photograph by USDA.

We invite you to share your opinion whether Congress should disband Wildlife “Killing” Services? Please vote and leave your comments at the bottom of this page: