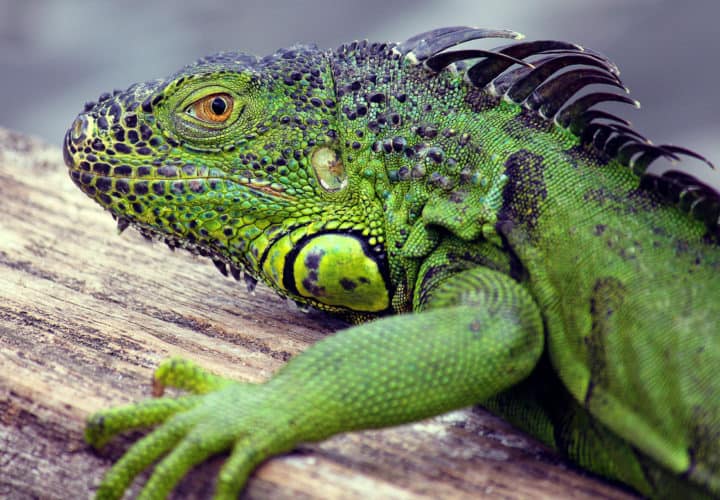 Florida is struggling with a fast-increasing population of invasive green iguanas that began as a small group of released and escaped pets.

There, state conservation officials claim they threaten the wellbeing of native animals, including the rare Miami blue butterfly: The green iguana likes to munch on the leaves of the Nickerbean blue plant, the same plant on which the endangered butterfly lays its eggs.

Officials also say iguanas are responsible for damage to sewer lines, roads, homes and gardens; and pose a disease risk to humans and other animals.

To reduce the green iguana population, the state has taken what a group of scholars and scientists is calling an “inhumane” approach to the issue: A 15-person team from the University of Florida is currently storming across the state, killing wild green iguanas by zapping them with electric cattle guns and smashing their heads against their trucks, boats and other hard objects. The $63,000-project, an attempt to reduce the population of invasive reptiles across the state, is contracted by the Florida Fish and Wildlife Conservation Commission. Opponents to the killing project have sent a letter to the commission urging it consider nonlethal control methods, such as birth control, or at the very least, to investigate more humane methods of killing the invasive species.

“It is important to stress that, as scientists ourselves, we are committed to the health of our ecosystems and we know that this conversation is an important one. Our central point, however, is this: There is no extreme urgency faced in Broward County in 2018 by the behavior of these iguanas and no reasonable justification for the extreme actions being taken,” they wrote. The letter is signed by 20 individuals, including prominent animal behavior and neuroscience experts including Marc Bekoff of the University of Colorado, Denver; and Safina Center Creative Affiliate Lori Marino, formerly of Emory University and currently executive director of the Kimmela Center for Animal Advocacy, Inc., and the Whale Sanctuary Project.

Both the letter-writing group and the Humane Society of South Florida contend that no iguanas should be killed, and instead, efforts toward coexisting with the invasive species should be made.

While some take a hard stance against any method of killing invasive species for population control, the extinction of native species might be a more frightening prospect. Take for example the case of invasive rats being introduced to the Hawaiian island of Lehua after hitching rides on ships from other parts of the world. After rats began harming the population of native Laysan albatross and many other species on the island (including native vegetation), wildlife managers dropped poison to kill the rats without harming any other species. As of November 2017, the island has been rat-free and native birds “are flourishing with no further sign of rat attacks on eggs, chicks or adults on nests. Plant leaves and new shoots that were previously consumed by rats are persisting. Many of the plants are in bloom,” according to the Hawaii Department of Land and Natural Resources.

“Humans brought those invasives, so humans must address the consequences,” said Safina Center Fellow Hob Osterlund, founder of Kauai Albatross Network, a nonprofit organization working to reduce threats to the survival of albatross and other birds on the Hawaiian islands. “If we do nothing, we are inadvertently condoning the extinction of countless natives. On Lehua Islet in Hawaii last year—before the rat extirpation began—only two albatross chicks fledged. This year, after the pellet distribution, there were close to one hundred and forty albatross nests. The results tell us what we need to know.”

Like rats, green iguanas, which are native to Central and South America, found refuge in a new land thanks to people. The letter signed by Bekoff and Marino emphasizes the fact that the state’s iguana problem is a result of human carelessness. The letter states that, while they are deemed invasive and possibly harm the native environment, green iguanas “deserve compassionate treatment by scientists just as individuals of non-invasive species do.” Its authors also strongly suggest Florida implement stricter rules about ownership of exotic animals, including iguanas, as pets.

“While we overlook our responsibility to the environment with lenient regulations on exotic animal pet trade and the [commodification] of other species, we ask the iguanas to ‘take the fall for us,’” Marino said in a message to one of the letter’s co-signatories, Barbara King, emerita professor of Anthropology at the College of William and Mary. “There is nothing humane or even scientifically-sound about ‘fixing the landscape’ to our liking. But that is exactly what is being done by the University of Florida in the [wanton] killing of healthy iguanas.”

This article was first published by National Geographic on 19 Apr 2018.

We invite you to share your opinion whether Florida’s invasive iguanas should be killed off? Please vote and leave your comments at the bottom of this page.