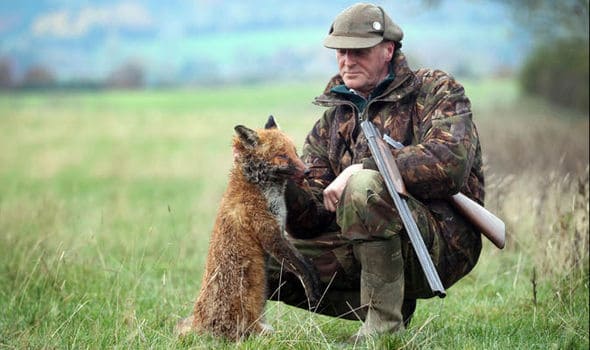 By using independent monitors to witness the hunts will ensure they stick to laws aimed at protecting wild animals from the clutches of packs of hounds. Landowners allowing hunts on to their property should also face prosecution if the law is broken, suggests the study.

Changes to the way Scotland’s fox hunting laws are enforced have been recommended today in a report by Lord Bonomy.

He had been asked by ministers to look at the 2002 legislation that protects foxes and other wild mammals while still allowing them to be controlled when necessary.

Fox hunting laws both sides of the English-Scottish border have become some of the most controversial legislation ever introduced. Police Scotland have described the law as “somewhat unworkable” because of a lack of clarity over terminology. In 14 years there has never been a successful prosecution.

Critics of the Scottish law say loopholes make it “not worth the paper it is printed on” because the way landowners can be offered the opportunity to control foxes using mounted hunts.

The law allows dogs to be used to flush a fox to guns to protect livestock or nesting birds.

In England, the Conservatives are pledged to a free vote on repealing the 2005 Fox Hunting Act, although anti-blood sports campaigners have fended off previous attempts to have it confined to the history books. They now say that Westminster should heed the Bonomy Report’s key message that hunting laws must be strengthened and enforced.

Lord Bonomy says the review had led to two broad conclusions. He said: “In the first place, there are aspects and features of the legislation which complicate unduly the detection, investigation and prosecution of alleged offences. “Secondly, there is a basis for suspecting that there may be occasions when hunting, which does not fall within one of the exceptions, does take place and that the grounds for that suspicion should be addressed.”

Anti-foxhunting protesters, Victoria Eisermann, former playboy model (left) and Pola Pospieszalska, Polish pop singer (right) gather outside the Houses of Parliament, London, as a vote to relax the fox-hunting ban in England and Wales has been postponed. He said considerations should be given to part-time, independent hunt monitors to randomly observe hunts using packs of hounds which, in turn, would be supported by a code of practice.

Lord Bonomy also calls for the law to be tightened to ensure “greater consistency and clarity of expression” while suggesting ministers look at “vicarious liability” for landowners so they could be held culpable if the law is broken on their property. Robbie Marsland, director of the League Against Cruel Sports Scotland, said Lord Bonomy’s “robust and detailed examination” clearly shows that the law is not working and needs improvements.

He said: “The ball is now firmly in the Scottish Government’s court. “Public opinion in Scotland wants to see fox hunting banned, the Government thought they had banned it and now Lord Bonomy and Police Scotland reveal that the hunts are running a coach and horses through the legislation.

Eduardo Gonçalves, chief executive of the League Against Cruel Sports, added: “The review of hunting in Scotland shows that hunts are playing fast and loose with the law, and our evidence shows that exactly the same thing is happening in England and Wales. “With any good law that is being treated this way, you strengthen it. You don’t scrap it.

“Our investigations have shown hunts caught keeping foxes for hunting. The idea that hunts are engaging in legitimate pest control is clearly untrue. As both our investigations and Lord Bonomy’s report demonstrate, hunts cannot be trusted.”

Alex Hogg, chairman of the Scottish Gamekeepers Association, said: “We feel that Lord Bonomy’s report is a balanced attempt to provide greater accountability and clarity around the law and we have no problems with increasing transparency. “From an operational perspective, however, we would hope Scottish Government do not apply vicarious liability to a landholder who permits such activities on her/his land.

It is often essential to have access to fringe or neighbouring land to get to an area where foxes are numerous.”

This article was first published by The Express on 21 Nov 2016.

We invite you to share your opinion whether fox-hunting laws should be strictly enforced? Please vote and leave your comments at the bottom of this page: