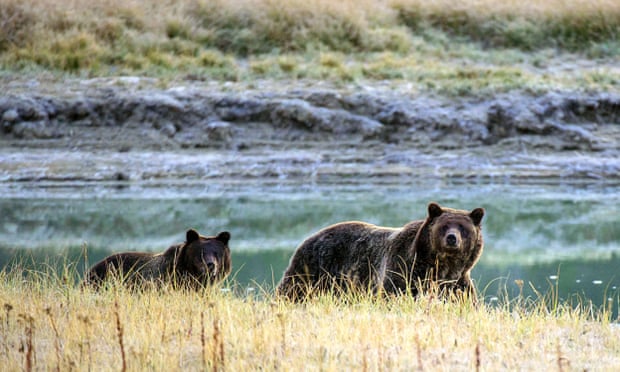 State and federal wildlife officials are set to strip grizzly bears of their protection from hunting around Yellowstone national park, with a plan that would remove one of the species’ last populations from the endangered species list.

A leaked letter from Dan Ashe, director of the US Fish and Wildlife Service, to state officials notes there is a “mutually understood process that will allow the Service to proceed with a proposed delisting” for grizzly bears in the Yellowstone region.

Yellowstone grizzlies were placed on the federal endangered species list in 1975, at a time when the population had declined to 136. It has now rebounded to between 674 and 839 in counts taken last year, with occupied habitat increasing by more than 50%.

This recovery has led to calls from Idaho, Montana and Wyoming – the states that contain and surround Yellowstone – to remove the bears from Endangered Species Act protections.

Under a plan being considered by the FWS, the bears would be delisted under a number of conditions, including that numbers not be allowed to fall below 600 “unless necessary to address human safety issues”. Allowed mortality rates for the bears would be increased as their numbers grow, with up to 10% of adult females and 22% of adult males allowed to be killed via hunting and other methods if the population exceeds 747.

Ashe’s letter, dated 25 September, also sets out a “demographic monitoring area” of 19,279 square miles. The FWS director writes that the “recovery of the GYE (greater Yellowstone ecosystem) grizzly bear population represents a tremendous conservation success story based on more than 30 years of collaboration between state and federal partners”.

Conservation groups are opposed to the delisting of the bears, pointing out that the Yellowstone population is one of the last groups of the species left in the lower 48 states of the US.

Historically, grizzly bears ranged from Alaska to Mexico, with a population of around 50,000. However, the bears were shot and poisoned to near-extinction. Today, there are around 1,500 of the animals left in pockets of the Rocky Mountains and North Cascades regions.

“The Endangered Species Act is incredibly effective at recovering imperiled species, and will do so for grizzlies across their range, but only if they retain protections until the science clearly demonstrates recovery.”

The Center for Biological Diversity, which is campaigning for grizzlies to be reintroduced to California, said any delisting would be premature and could reduce the Yellowstone population by more than 100 bears.

“Moreover, killing grizzly bears just outside of arbitrary delisting boundaries drawn on a map would be entirely legal and would not count toward mortality thresholds put in place to protect the population from plummeting,” the group said in a statement.

The proposed plan means that the hunting of the bears could be allowed as soon as January, with the FWS unlikely to officially unveil its verdict on the status of grizzlies until the new year.

A spokeswoman for the FWS said no final decision had been made.

“The Fish and Wildlife Service does believe that grizzly bears have biologically recovered but we are still looking at the delisting proposal,” she said. “We want to see that the recovery would still be viable if protections are removed so that the species never needs Endangered Species Act protection again.”

This article was first published by The Guardian on 08 Dec 2015.

We invite you to share your opinion whether grizzly bears be removed from the endangered species list? Please vote and leave your comments at the bottom of this page:

Hell no!! How can this even be a question? What? You want the serial killers to go there also and slaughter our bears??? Protect them!

NO never remove their protection. This sounds like a lot of influence being put on by the fanatics who love to carry guns, and kill things! For god sake stop the killing!

as long as their are humans on earth, ALL species are endangered!

NOOOO! THERE ARE 757 IN YELLOWSTONE. THEY NEED PROTECTION OR THEY WILL GONE SOON!