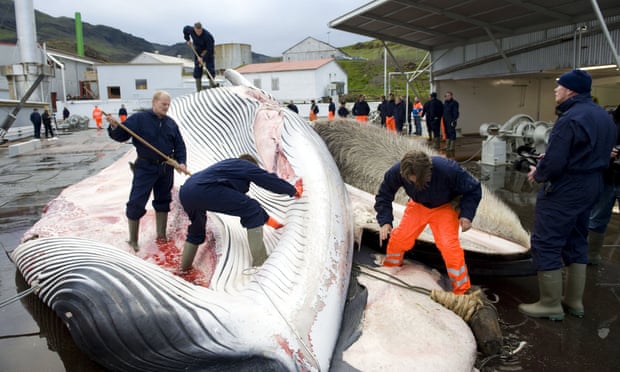 Iceland’s being condemned for recently approving the killing of hundreds whales over the next five years.

Hundreds of whales have since lost their lives, and the toll it’s taking was brought back into the international spotlight last year after the nation’s lone fin whaling company Hvalur hf killed two blue/fin whale hybrids in violation of international law.

Despite a dwindling interest in whale meat, and international opposition to whaling, Iceland’s Minister of Fisheries and Agriculture Kristján Þór Júlíusson has just issued new commercial whaling quotas that authorize whalers to kill up to 209 fin whales and 217 minke whales every year through 2023, and has come to an even more troubling conclusion that other populations, including humpback and sei whales, are growing and could potentially also become targets.

The decision is reportedly based on a macroeconomic report on whaling that was released by the University of Iceland’s Institute of Economics earlier this year.

Conservationists, however, disagree and have heavily criticized the report for failing to take into account the overall impact whaling has.

“Minister Júlíusson has failed not only Iceland’s whales but also the people of Iceland in making this decision,” said Susan Millward, the Animal Welfare Institute’s marine animal program director. “The deeply flawed macroeconomic review of whaling did not consider the welfare implications of whaling, nor did it accurately portray the negative impacts whaling has had on Iceland’s image and economy.”

Concerns are also being raised about how this is going to impact tourism, and whale watching in particular, which generates significant revenue for the country.

Iceland now remains the only country to kill endangered fin whales, which are mainly exported to Japan, while minke whales go mainly to tourists who are led to believe it’s traditional food, and are also believed to be a major force driving the demand for whale meat.

“This is a country that’s embraced whale watching and has a different relationship with whales now,” Chris Butler-Stroud, a spokesman for Whale and Dolphin Conservation, told CNN. “The reality is, the whale meat that’s being consumed there is mostly by tourists, unfortunately. … If it was down to local consumption, this probably would be dead in the water.”

Conservationists, and organizations including the International Fund for Animal Welfare and Whale and Dolphin Conservation, have been working to educate Iceland’s visitors about the cruelty involved and the harm whaling is doing, and have continued to support sustainable tourism activities like whale watching, which is worth far more to Iceland’s economy than the a small industry killing whales.

Hopefully more awareness about the issue will help drive this industry into the past where it belongs, and whale watching will take its place as a far more lucrative and sustainable business.

We invite you to share your opinion whether Iceland should be sanctioned for approving the killing of hundreds of whales? Please vote and leave your comments at the bottom of this page.