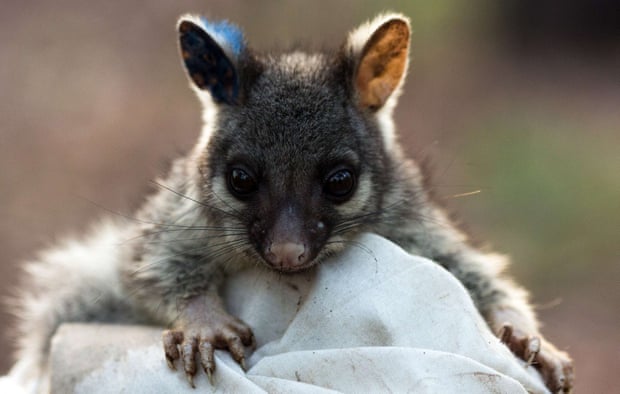 One can understand New Zealand’s apparent frustration with invasive Australian brushtail possums. One can conjure up genuine sadness for the damage the possums cause through their unwavering appetite for birds’ eggs and one can feel real concern for the plight of the native species being edged out.

Like many invasive species, they are a nightmare made real. Fast-multiplying bullies. Monsters. And like all monsters they need to be caught and their babies given a damn good drowning in a bucket of water in front of children at a school fundraiser.

You may think I’m joking about this last bit, but this very public drowning really did happen this week during one of New Zealand’s popular (and normally more humane) public possum-hunts. As part of the annual event, the mother possum was shot and skinned and her babies drowned. International efforts to tackle invasive non-native species just took a questionable lean toward the unsavoury and I think we need to talk about it.

Possum hunts aren’t new to New Zealand and, in fact, a few countries encourage such “mob-vigilante” action against invasive species. On a specific day each year in eastern Australia, for instance, the public are encouraged to take part in the big “TOAD DAY OUT” during which they are permitted to catch hundreds of invasive poisonous cane toads. Willing Australians citizens round them up, alive, and pass them onto authorities who weigh them one-by-one and considerately euthanise them before turning them into fertiliser.

Invasive snakes too have also been on the receiving end of this “fun” form of wildlife-control. In the Florida Everglades – another habitat besieged by species that do not belong – government officials co-organise a real-life Python Challenge, with prizes of up to $1,500 for would-be hunters of invasive Burmese pythons.

To take part all you need is a gun, a $25 dollar registration fee and an 80% pass score in an online exam that tests your non-native snake identification abilities. So New Zealanders aren’t alone in bringing a bit of sport to their conservation challenges and, on the whole, we might forgive them that. It’s just that other nations don’t use a bucket, I guess. And it’s not done in a school.

And so, let us go back to that bucket. Could you do it? I mean, really … could you drown some baby possums in a bucket in front of an audience of children?

I mean this in all seriousness so please do take some time to think through this question, of which there are likely to be only two possible answers:

I think I’m a No. I’m a No, unless the baby possums somehow gained Gremlin-like sentience and came for my throat and I had to defend myself, which is unlikely given that baby possums are wholly defenceless and, being young, would probably be looking not for my jugular, but for a warm armpit in which to nestle. And so I don’t think I could drown a baby possum. There. I said it. Now you know. But people drowning invasive species is not unheard of, even though the act is illegal in Britain.

I have met drowners. My childhood naturalist mentor once shocked me by telling me that he regularly drowned the squirrels he trapped in his garden in a bucket. He was proud, I think, to be tackling the problem of invasive species on the frontline. He was doing his bit for the nation, he argued. He seemed to quite like my shock. Even still, I think we both knew however, even then, that every grey squirrel drowned would be replaced by more in time. But, still – it was in the national interest, apparently. He was a soldier, bringing back “our green and pleasant land” and the grey menace? They were just … again, they were just monsters. You probably know people who did it too. Some people can desensitise themselves to the suffering of invasive species, it seems. They had it coming, they must tell themselves.

How do we get like this? The press probably play a significant part in upgrading the horror. Invasive species such as Asian hornets and Spanish slugs and demon shrimp are often referred to as “armies” or “hordes” or “invaders” in articles or TV pieces. Are these genuine conservation concerns? Yes. Is this well-considered coverage? No, not at all. For to give invasive species purpose and character like this is folly. Invasive species have no purpose other than, like every else, to make more of themselves. The problem is simply that they are managing this better than the creatures with whom they cohabit. (You’d think we’d recognise more easily the commonality that we share with them.) Plus, we intentionally released the possums, cane toads and grey squirrels so it’s our fault really. If there really are monsters, they are us.

This article was  first published by The Guardian on 06 Jul 2017.

We invite you to share your opinion whether invasive animal species be controlled by drowning? Please vote and leave your comments at the bottom of this page.

No. Of course not.

Has man lost all?

Drowning is considered a humane way to euthanize nuisance animals.
Doing it in front of young school children is a really bad idea, though. Also, Florida’s python hunt is not for ‘sport’, it is a bounty hunt to eradicate a nuisance exotic species very dangerous to wildlife and humans alike. Thankfully, wildlife programs are not run by the respondents to these FOW polls.

Humans are the bigget Vermin on the planet.

No !! Drowning is horrible death

NO!! people are invasive to their habitats

IF ANY SPECIES SHOULD BE, IT’S THE MAJORITY OF THE DISGUSTING HUMAN SPECIES, THAT DON’T LOVE NATURE AS IT IS!!!!!!!

“Humane”is an interesting term of rhetoric. It seems to be used by both those who desire to save an animal, as well as by those whoo desire to execute animals, including for “sport” and its associaed perverse pleasure.. As i’ve studied the hormone and neuromodulator release experienced by human males during(and while anticipating) events such as killing, sex (including rape), it has become quite clear that absolutely every atrocious behavior is or can be supported by positive internal reward. So, “humane” and “euthanasia” when applied to killing another organism are oxymoron. When I was in New Zealand a couple decades… Read more »

An Excellent, Educated, form of Information read. Thank You 🙂

I agree nothing deserves the cruel ad painful way of dying by drowning. To do it in front of children is asking for a future generations of sadists

No way, I find this suggestion appalling and repulsive! This is totally unacceptable to commit such sickening cruelty to these possums! I wish humans would give the same urgency to the endless problems they are creating by encroaching and destroying habitats of animals and birds! How about enforcing mandatory spay/neutering of cats to prevent feral and stray cats population as a start! PROACTIVE measures not barbarism cruelty to any wild life!

NO – they should not be controlled by drowning – this is barbaric – God put them on this earth for a reason and it is not up to man to decide to kill them off. This is wrong and the decision of evil people to drown these little animals for their idea to get rid of them.