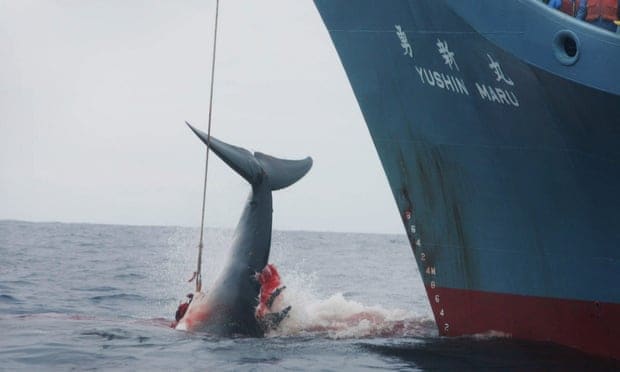 Japan is to withdraw from the International Whaling Commission (IWC) and resume commercial whaling next year, a report claimed on Thursday, in a move that drew condemnation from Australia, with other anti-whaling nations expected to follow suit.

Japan will inform the IWC of its decision by the end of the year, Kyodo news agency said, months after the body rejected its latest bid to resume commercial whaling.

Kyodo quoted unnamed government sources as saying Japan would abandon its controversial, and expensive, expeditions to the Southern Ocean and instead permit whaling fleets to operate in its coastal waters and exclusive economic zone (EEZ).

A fisheries agency official denied the report, however, insisting no decision had been taken on whether to withdraw from the IWC, which banned commercial whaling in 1986.l whaling as soon as possible, has not changed,” the official told the Guardian. “But reports that we will leave the IWC are incorrect.”

Australia’s environment minister, Melissa Price, said it remained opposed to “all forms of commercial and so-called ‘scientific whaling’”, adding: “While we would strongly prefer Japan to remain a party to the convention and a member of the commission, the decision to withdraw is a matter for Japan.”

Agence France-Presse quoted an official as saying the agency was “considering all options”, including the possible withdrawal from the 89-member commission. A foreign ministry official confirmed “all options are on the table but nothing formal has been decided yet”.

Conservation campaigners welcomed the possible end to whaling in the Southern Ocean but warned that by withdrawing from the IWC, Japan risked becoming a “pirate whaling nation”.

“We would like to wholeheartedly celebrate an end to Japan’s whaling in the Southern Ocean, but if Japan leaves the International Whaling Commission and continues killing whales in the north Pacific it will be operating completely outside the bounds of international law,” said Nicola Beynon, head of campaigns at Humane Society International in Australia.

“This is the path of a pirate whaling nation, with a troubling disregard for international rule.”

Darren Kindleysides, chief executive of the Australian Marine Conservation Society, said: “Leaving the IWC would set a very dangerous precedent for other international treaties and conventions. Not satisfied with harpooning whales, it now looks like Japan is threatening to harpoon the future of the IWC.

“The IWC has become the driving force for global whale conservation efforts in the 21st century. If Japan is serious about the future of the world’s whales, they would not leave the IWC.”

Japan has previously threatened to quit the IWC, arguing that the moratorium was supposed to be a temporary measure and accusing the IWC of abandoning its original purpose – managing the sustainable use of global whale stocks.

Japanese officials claim that populations of certain types of whale – such as the minke – have recovered sufficiently to allow the resumption of “sustainable” hunting.

At September’s IWC meeting in Florianópolis, Brazil, anti-whaling nations led by Australia, the European Union and the US voted down a Japanese proposal to change the decision-making process – a move that would have made it easier for Japan to secure enough votes to end the commercial whaling ban.

The defeat prompted Japan’s IWC commissioner, Joji Morishita, to warn that the country’s differences with anti-whaling nations were “very clear” and that it would plan its “next step”.

Japan has been able to use a clause in the IWC moratorium allowing it to conduct “research” hunts every year and to sell whale meat on the open market, although consumption has plummeted in recent decades.

Japan faced criticism earlier this year after reporting that its whaling fleet had killed 122 pregnant whales during its annual research hunt in the Southern Ocean last winter. Of the 333 minke whales caught during the four-month expedition, 181 were female – including 53 juveniles.

In 2014, the international court of justice ordered Japan to halt its annual hunts in the Southern Ocean after concluding that they were not, as Japanese officials had claimed, conducted for scientific research.

But Japan resumed whaling in the region two years later under a revamped programme that included reducing its catch quota by about two-thirds.

Japan would join Iceland and Norway in openly defying the ban on commercial whale hunting.

This article was first published by The Guardian on 20 Dec 2018.

We invite you to share your opinion whether Japan should be sanctioned for continuing commercial whaling? Please vote and leave your comments at the bottom of this page.

No. Monomaniac anti-whaling nations can not show rational reasons whaling should be banned. They can not even speak calmly, they only cry out emotionally.

They poison the ocean with the nuclear waste and then they rob the ocean of its life. Unequivocally YES! Damn them!

I think that everyone should leave the whales alone

Yes of course…..why the help is this still allowed? Who ever sanctioned it should be hold responsible.

Hilary Morrison its is to easy to judge just like u just did. Try to climb this thought; whales though they are the largest mammal easy to use as a campaign. In my world all species are under pressure from mankind in general. There are to many people on planet earth. If u eat meal of just harvest the crop u must think in a larger scale. No Animal must be killed but a poor man from Greenland is in need of food. Band large weasels and make people understand they must not buy meat from a whale then the… Read more »

Kim Vesterlund Øie Your reply is annoying only encouraging killing these animals.

Hes saying the truth – other than vegans & vegetarians – we ALL consume other animals – sure, its wrong to continue to slaughter whales & seals – but everyone carries some guilt! I do wonder what the real reason is for Japan’s continuous push to kill whales – sounds as if there really isnt much demand for the meat & research? What research?

Hilary Morrison no I am not. People in general is a predator. What I do not like is we always talk about whale and seal. All our eco system is under pressure from mankind. We consume meat and fish and do that with no problem. In my opinion we should reduce people and make room for the animals and wildlife