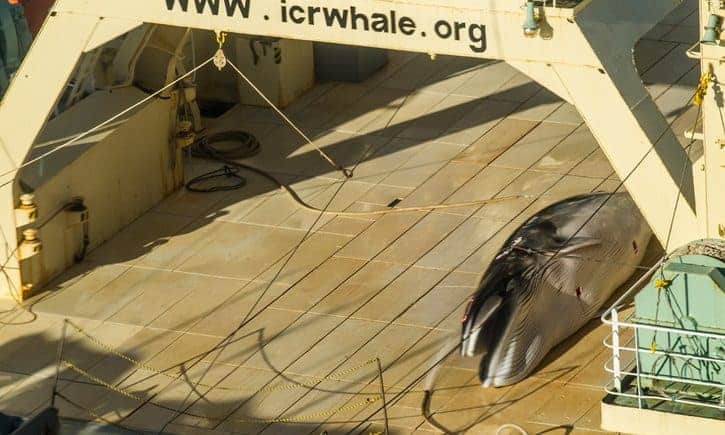 Anti-whaling campaign group Sea Shepherd says it has photographed Japanese whalers carrying out a slaughter inside Australia’s Antarctic whale sanctuary, the same day the Japanese prime minister, Shinzo Abe, was in Australia on a state visit.

In the first documented killing since the international court of justice ruled Japan’s Antarctic whaling illegal in 2014, Sea Shepherd released photographs of what it says is a dead minke on the deck of the whaler Nisshin Maru at 11.34am on Sunday.

Sea Shepherd activists, who took the photos by helicopter after five weeks shadowing the Japanese whalers, said the Nisshin Maru crew tried to hide the slaughtered minke with a tarpaulin.

The whaling fleet’s harpoon ships Yushin Maru and Yushin Maru #2 then covered their harpoons, according to Sea Shepherd.

The photographs are also the first to document the Japanese fleet’s killing of whales since Australia’s federal court in 2015 found the industry was in contempt for killing protected whales in Australia’s declared sanctuary.

The court fined Japanese whalers $1m over the killings but the fines were ignored.

Abe left Australia on Sunday after a two-night stay in Sydney, which included meeting his counterpart, Malcolm Turnbull, on Saturday to discuss trade and security in Asia.

The photographs were taken by the helicopter from the Sea Shepherd ship, the Steve Irwin, the anti-whaling group said, providing coordinates to show it was inside the Australian whaling sanctuary.

Adam Meyerson, the captain of the Sea Shepherd patrol ship Ocean Warrior, said: “The whale killers from the Nisshin Maru were caught red-handed slaughtering whales in the Australian whale sanctuary.

“The Steve Irwin has shut down their illegal operations and caught them trying to hide the evidence.”

Jeff Hansen, the managing director of Sea Shepherd Australia, said a “lack of action by the Turnbull government” in response to the killing of whales in Australian waters on the tail of a state visit from Abe showed “the government has no spine when it comes to protecting the wishes of Australians to defend the Southern Ocean whale sanctuary”.

Wyanda Lublink, the captain of the Steve Irwin, said the whalers “know they are in contempt of the ruling of the international court of justice and the Australian federal court”.

“The fact that the Japanese crew went to cover up their harpoons and the dead minke whale on deck just shows that they know what they’re doing is wrong,” she said.

Sea Shepherd said in a statement on Sunday that the killing of whales had been halted after the helicopter relayed the whaling fleet’s position to the Steve Irwin, which was on course to intercept the factory ship.

Japan had previously caught hundreds of whales a year in Antarctic waters, eluding a worldwide moratorium on whale hunting under a “scientific” research program other nations regarded as a sham. The meat from the program, which is subsidised by the Japanese government, is sold in Japanese restaurants. But the whale meat, common in Japanese school lunches during the 1960s, now rarely figures in the diets of most Japanese.

A spokesman for the Australian environment minister, Josh Frydenberg, was contacted for comment.

The Coalition has condemned Japan’s whaling activities and Turnbull was believed to have raised the issue privately with Abe, Fairfax has reported. But the government has resisted calls to send a government vessel to patrol its waters and intervene.

International law professor and whaling expert Tim Stephens has told the ABC that Australia could put a stop to whale hunting by taking Japan to the international tribunal for the law of the sea.

Stephens said the tribunal had “a system of mandatory dispute settlement” of which it would be difficult for Japan to opt out.

This article was first published by The Guardian on 15 Jan 2017.

We invite you to share your opinion whether Japan should be sanctioned for continuing to slaughter whales? Please vote and leave your comments at the bottom of this page:

Why ask. Sanctions should be immediately implemented.
DO THE RIGHT THING

Why ask. Sanctions should be immediately implemented.
DO THE WRIGHT THING

We must do everything to protect animals

I have been following the slaughter of the dolphins in Taiiji Japan. I call for sanctions and boycott of Japan and all their exports. Thousands of dolphins are forced into a cove every year and brutally slaughtered. They select dolphins to sell to marine parks. Do not buy tickets to these shows. You are helping these evil murderers. Yes, this should be a crime and those who do it should be arrested and sentenced to serve prison time.

Japan is rather fascistic in govt support for this industry. These very same offices are the ones to which many of us wrote repeatedly in decades past. So long as human populations increase there will be increasing – nt merely constant, but increasing, pressure to mine the living individual organisms of the earth to solipsistically feed only humans (or the slave animals upon which they feed). The Koreans are now taking krill, putting them into craftily-marketed “fish-oil” capsules, feeding the already obese US citizenry (there are more obese humans in the world than there are hungry, according to scientific statistical… Read more »

If the Japs are covering items up it means they’re ashamed. This will be for the first time ever that this has happened. The world needs to criticise them like never before and sanctions must be enforced.

They are not in the least ashamed. They seek excessive personal and group wealth as measured by worthless things like gold and paper and worship by other humans taught to do so in the most inflated culture now temporarily existing, until it collapses the entirety of earth’s habitats, and extinguishes all vertebrate life, of which humans and their domestic slave animals will be the last.