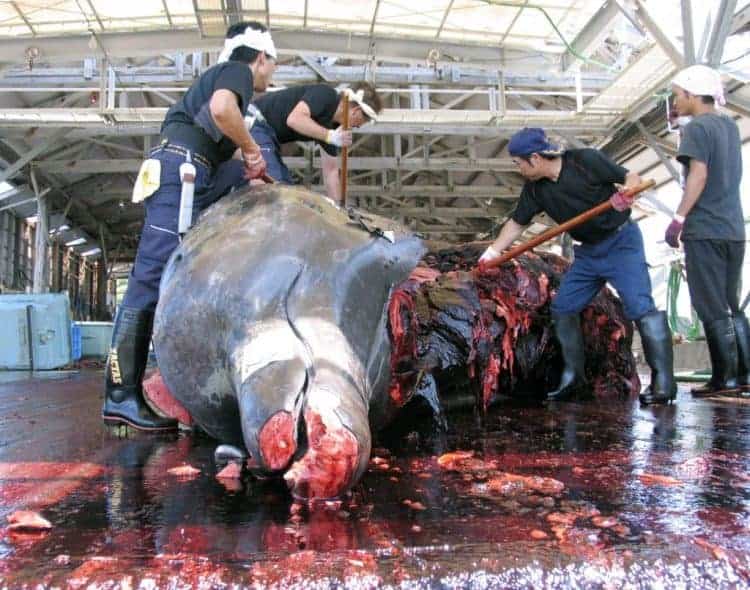 A Japanese whaling fleet returned to port on Friday after an annual Antarctic hunt that killed more than 300 of the mammals, as Tokyo pursues the programme in defiance of global criticism.

The fleet set sail for the Southern Ocean in November, with plans to slaughter 333 minke whales, flouting a worldwide moratorium and opposition led by Australia and New Zealand.

The fleet consisted of five ships, three of which arrived on Friday morning at Shimonoseki port in western Japan, the country’s Fisheries Agency said.

More than 200 people, including crew members and their families, gathered in the rain for a 30-minute ceremony in front of the Nisshin Maru, the fleet’s main ship, according to an official of the Shimonoseki city government.

In a press release, the agency described the mission as “research for the purpose of studying the ecological system in the Antarctic Sea”.

But environmentalists and the International Court of Justice (IJC) call that a fiction and say the real purpose is simply to hunt whales for their meat.

Anticipating the fleet’s return, animal protection charity Humane Society International called for an end to Japanese whaling. “Each year that Japan persists with its discredited scientific whaling is another year where these wonderful animals are needlessly sacrificed,” said Kitty Block, the group’s executive vice-president.

“It is an obscene cruelty in the name of science that must end.”

Japan also caught 333 minke whales in the previous season ending in 2016 after a one-year hiatus prompted by an IJC ruling, which said the hunt was a commercial venture masquerading as science and ordered Tokyo to end it.

Under the International Whaling Commission (IWC), to which Japan is a signatory, there has been a moratorium on hunting whales since 1986.

Tokyo exploits a loophole allowing whales to be killed for “scientific research” and claims it is trying to prove the population is large enough to sustain a return to commercial hunting.

But it also makes no secret of the fact that whale meat ends up on dinner tables and is served in school lunches.

Japan has hunted whales for centuries, and their meat was a key source of protein in the immediate post-second world war years, when the country was desperately poor. But consumption has dramatically declined in recent decades, with significant proportions of the population saying they “never” or “rarely” eat whale meat.

In response to the ICJ ruling, Japan’s 2014-15 mission carried out only “non-lethal research” such as taking skin samples and doing headcounts.

Past missions have been hampered by a confrontational campaign on the high seas by environmentalists Sea Shepherd. A fisheries agency official said that the whalers this time faced “no obstructive behaviour threatening safety of the fleet and crew members” by the group.

He attributed that partially to Japan dispatching patrol ships to protect the fleet.

This article was first published by The Guardian on 31 Mar 2017.

We invite you to share your opinion whether Japan should be sanctioned for slaughtering Minke whales? Please vote and leave your comments at the bottom of this page.

Horrific at the slaughter of these Minke Whales. Truly heartbreaking. Makes me sick to my stomach. How vicious and cruel. To me it is plain SADISTIC MURDER OF INNOCENT ANIMALS. It needs to stop. Horrible, horrible and so terribly sad to know this is still going on.

Yes they definitely should be.

Indeed! I’m with you, Jean Valarde…!

Strangest Minke Whale i have ever seen, it was a beaked whale, probably Bairds and you can easily see the tip of the beak has already been cut off to confuse identification. Once these ignorant people are out in the Oceans they can kill anything, once it is cut up and frozen the only way to identify the meat is by DNA analysis.

Yes they should every time they slaughter

The japanese people have no respect for animals and nature. Nothing is zen about slaughtering wales and dolphins. The Japanese people deserved what they got! I can’t do much but at least I support the Sea Shepard and will keep sending them money as long as it is needed.

Custom will reconcile people to ANY atrocity! ~George Bernard Shaw

To bad the fleet didn’t sink!!

Yeah they should Absolutely

To cause terror to any animal is cruel,to hack any animal till they die is beyond thinking, to hack a pregnant animal is repulsive and EVIL. Cruelty is happening in all countries and animal activists try to change the thinking of these heartless people. The Japanese slaughtering of these beautiful Minke whales is a disgrace to the creator of life and is shameless ,disrespectful and another country who have no morals !

They already have been known to eat aborted babies, so I don’t think there is a line they won’t cross. They eat animals whilst they’re alive such as frogs, pinkies and fish.

YES!!!!!!! I thought Sea Shepherd was in the Southern Ocean and amazed that we have not heard about this from SSC!

Yes and every other country that does this with animals.

Yes they should be sanctioned.

The problem with Japan and its belegerance on whaling is that very severe sanctions, economic sanctions, might work, but attempting to shame Japan to the international community will not work. Japanese culture percieves everyone not Japanese as less than, and the only shaming that could work would be within Japan itself. Illustrating how this active whaling might impact the ecosystem around Japan would also work, but only if a convincing ecological case could be shown. The only remaining method that might work is stressing that whales are mammals, not fish, (as they are culturally percieved as being), and that many… Read more »

How would you sanction a country who has an AA Credit rating? There is nothing that can be done other than an rant at them.

Mankind seems to be getting more agressively cruel towards animals just for the sake/fun of it. At least in the past it was done for survival (food and/or defence) and just the amount required at the time, not en masse and stored.

“”The people who can actually go out and massacre to this degree seriously need guidance.””

Look at the violence the Japanese did to POWs, during WW II. That is why the USA dropped two Nukes on them. There is a genetic culture that shows throughout their history.

Yes they kill just for the sake of it. Not many people want to eat them now and it is such a sad waste of their lives.

Yes. They are barbaric. Stop this now

Of course!!! Dirty bastsrds have already poisoned half the sea with that nuclear plant leaking everywhere!

Haven’t we wiped out enough species on this once beautiful planet?? Stop this mindless slaughter of Life in the oceans!

It’s times like this that I think I could actually support eco-terrorists, who set out to sink the Japanese whaling fleet. My next best item on that wish list would be the U.S. Navy sinking any Japanese whaling vessels that entered the whale’s Arctic habitat. And although I have purchased and enjoyed Japanese automotive products in the past, like my ’80 Plymouth Champ, ’88 Corolla FX and ’89 Nissan Maxima, I will not buy any Japanese products in the future so long as that nation continues this slaughter. Please join me in boycotting Japanese products.

“”My next best item on that wish list would be the U.S. Navy sinking any Japanese whaling vessels that entered the whale’s Arctic habitat.”” You are phsyco, that is an act of war. Matter of fact the “Sea Shepard” should be sunk over the acts they have televised. Do you not realize the boat has vioatlated international laws, that are not any different than the Japanese. I recent purchased a Nissen Altima program car. Nothiing about it is made in Japan, all the parts are made and it is assembled inthe USA! Carlos Goshen from Brazil is the CEO of… Read more »

JD Creager, Nothing you say here, shows any support for Whales!!!!!. Sinking G-DAMN Whaling Ships would be a BONUS to Saving Whales, and possibly any other Species, that no one knows about!!!. I praise the Sea Shephard Crew for “”Risking Their Own Lives”” to Save the Innocent Ocean Life!!!. The Dolphin slaughter is another Horrific slaughter, that those Japanese continue to “”Stubbornly”” pursue!!!. Animals come before People in my book!!!.

JD Creager You attack Sea Shepherd for trying to stop the illegal slaughter of whales. I think you are the “psycho” here (learn to spell). In my opinion, the Australian and New Zealand navies should arrest the Japanese whaling ships for breaking international law, remove the crews, and scuttle the vessels. There is no way they will replace them.

I cant imagine any decent human beign would find this sensless psychopathic savagery acceptable expect these cold blooded killers! Why Japan? Why? Who do you hate so much that you have to take the vengence out on innocent whales who have done you no harm? Unforgivable!

The Japanese would argue that it is part of their culture. I would argue that they do not need to do it. I mean we used to put small children dow mines, but not any more. A Nation should develop. Some things are best consigned to the history books.

Hi. I am curious to know when and where the image that illustrates this article was taken? One reason being that the whale being cut up in the photo is not a Minke whale. It would be good to know on what occasion this photograph was obtained. Thank you!

Hi, Morten. I did some research on this photo and learned that the whale species is in fact a Baird’s Beaked Whale. Thanks for pointing out this discrepancy.

Ah yes, I was working on the ID – Baird’s of course! So the whale was probably taken in Japanese waters, or certainly North Pacific anyway. I wonder when?

why the people want to devour everything that is alive???? i will never understand !
MAke me sick!

go vegan, that is the only way 🙂