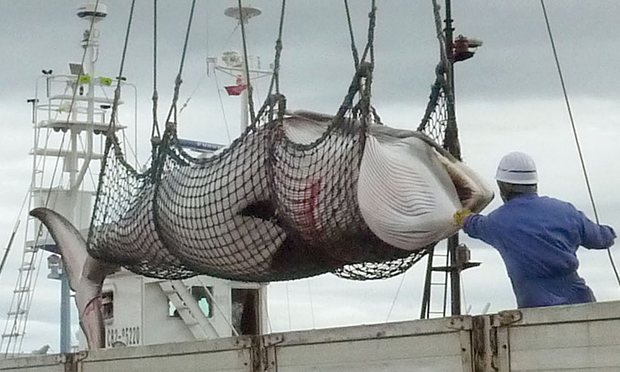 Australia has thrown its weight behind a bid to outlaw large-scale commercial and so-called “scientific” whaling at a summit next week.

The International Whaling Commission meeting in Slovenia follows Japan’s recent slaughter of more than 300 minke whales, many of them pregnant, when they resumed so-called scientific whaling after a hiatus because the International Court of Justice ruled the hunts were not scientific and should cease.

Australia has put forward a resolution to the conference that would require Japan to get approval from the IWC for its “scientific” quotas.

Japan is also expected to again face criticism from other countries for its whaling in the Southern Ocean, in defiance of the court ruling.

On Friday the federal environment minister, Josh Frydenberg, said he would call for global protection of whales, saying the government “strongly supports the global moratorium and will continue to work towards a permanent end to all forms of commercial and so-called ‘scientific’ whaling”.

“For too long, the commission has deferred responsibility for so-called ‘scientific’ whaling to its scientific committee,” Frydenberg said. “The commission must be more engaged on this important and divisive issue and form its own conclusions.”

This year marks the 30th anniversary of the global moratorium on commercial whaling and 70 years since the International Convention for the Regulation of Whaling was made.

Kitty Block, the vice-president of the Humane Society International, which was part of the Australian legal action, said: “Japan’s unilateral resumption of its so-called ‘scientific’ hunt in the Southern Ocean last year is a slap in the face not just for the International Whaling Commission but also for the rule of law, as the international court of justice clearly ruled Japan’s previous Antarctic ‘research’ program to be illegal.”

This article was first published by The Guardian on 21 Oct 2016.

We invite you to share your opinion whether Japan should face sanctions for continuing “scientific whaling”? Please vote and leave your comments at the bottom of this page: