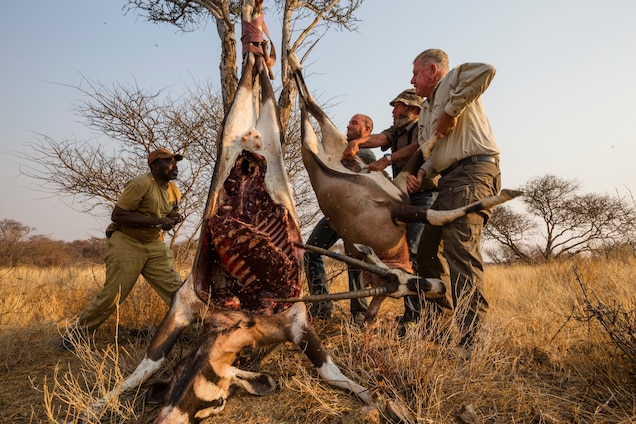 When Australia banned the importation of lion trophies this year, it became the first country to take legislative action against the lucrative business of hunting captive lions, an increasingly popular activity in South Africa.

Now the anti-captive hunting lobby—made up of conservationists and activists from around the world—is pushing for similar legislation to prevent lion trophy imports into the European Union.

Longer term, the opponents hope that a ban will be adopted by the United States, source of most of the hunters who go to Africa. (Read about the United States’ decision to allow hunters to bring home rhino trophies.)

In South Africa, the hunts involve lions born and raised in cages. When they reach about four years old, they’re loosed into a fenced area of at least 2,500 acres to become targets for hunters using rifles or bows.

Demand for captive hunts has soared in recent years. South Africa (which recently released a Management Plan for lions) now has about 160 ranches with more than 6,000 lions, and 1,000 are shot each year. Hunters pay as much as $20,000 to bag a big male.

Meanwhile, populations of lions in the wild have plummeted in Africa, from an estimated 200,000 a century ago to some 30,000 that live in isolated pockets. Lions require large areas to roam, and outside national parks and reserves, they often clash with livestock farmers and local communities.

Hunting Lions to Save Them?

Advocates of the lion ranching industry say that by breeding lions for hunting, they’re helping conserve the species.

“For every captive-bred lion hunted, you’re saving animals in the wild,” said Pieter Potgieter, chairman of the South African Predator Association. If there were no captive hunts, he says, there would be more sport hunting and poaching of wild lions.

But a growing number of scientists and conservationists see little evidence to suggest that the captive hunting industry in South Africa has done anything to stem lion declines in the wild across the continent.

Chris Mercer, head of the Campaign Against Canned Hunting, a global organization, says the opposite is more likely.

“You have to decide what conservation is,” he said. “You can’t just look at numbers of animals. I would define real conservation as the preservation of natural functioning ecosystems.

“On ranches where farmers buy animals, put them on their land, bring the hunters on to shoot them, and then go back and buy more—that has nothing to do with conservation.”

In Mercer’s opinion, “Lion farming is actually contributing to the extinction of wild lions.”

Not so, says Potgieter, who believes that captive breeding enhances the overall gene pool, because some of those lions can be introduced into struggling wild populations.

But a 2012 report in the journal Oryx—“Walking with lions: Why there is no role for captive-origin lions in species restoration”—said that captive-bred lions and their offspring are poorly suited for survival and release back into the wild.

According to Hunter, “Any sincere effort to reestablish lions simply has no reason to resort to captive animals.”

The African lion is classified as Vulnerable on both the International Union for Conservation of Nature’s (IUCN) Red List and South Africa’s List of Threatened or Protected Species. But regulated hunting of captive and wild lions is legal in South Africa.

Wild hunts in southern Africa occur within designated concessions, mostly on the fringes of national parks. Hunts are generally managed under a yearly quota system, with the numbers of permits sold calculated so as not to undermine lion populations.

A big male lion shot in the wild can fetch up to $75, 000—nearly four times what a captive hunt can bring.

A 2012 study of the effects of the South African captive-bred hunting industry on wild lions in the rest of Africa showed that if captive hunting is stopped, there might be some increase in demand for hunting wild lions.

But the study also suggested that additional demand for hunts of wild lions could help the species by raising the price of these trophies, creating further financial incentive—assuming the funds were put back into conservation—to preserve wild populations.

Dereck Joubert, a big cat conservationist and National Geographic Explorer in Residence, believes that “there’s no place for lion hunting of any kind in Africa.” Particularly, he says, “while wild lions continue to decline at the present alarming rate.”

In recent years, demand in Asia for lion bones has surged, threatening wild lions as never before and boosting the already lucrative South African market for breeders of captive lions for hunting.

Lion bones are coveted in Vietnam and China as a fraudulent and cheaper substitute for tiger bones to make “wine” and other products. The bones are ground down, boiled, and mixed with other ingredients, such as goat bones, herbs—even opium—to make a “tiger bone” cake that is believed to have medicinal properties.

Tigers are now so rare, numbering perhaps no more than 3,000 in the wild, that poachers can be expected to increasingly target lions instead. In Vietnam, the skeleton of a single lion can earn the producer of fake tiger bone cake up to $70,000.

Potgieter believes that skeletons from captive-bred lions in South Africa are helping to supply the demand for lion bones in Asia, in effect protecting lions in the wild.

Chris Mercer, however, is concerned that the legal trade in lion bones from South Africa (which currently supplies an illegal tiger bone industry in Asia) is only fueling demand, and will ultimately devastate wild lion populations.

“Traditional Chinese medical practitioners often insist that the bones of wild animals are more potent than those of captive bred ones,” he said, which will inevitably increase the incentive to poach wild lions.”

“The whole animal bone industry is fraudulent,” he said, “but what lion farming is doing is building up a massive demand and increasing the investment in Asia in this industry.”

But, he said, “You can’t just march into the EU and expect to make sudden changes. It’s going to take time.”

In 2009, the European Parliament—reacting to opposition to the mass hunting and harvesting of wild harp seals in Canada—made an unprecedented and controversial change in legislation that prevents the importation of seal products into the EU.

Michler is confident that a similar decision will be made with regard to lion trophies.

The campaign to end canned lion hunting has not yet reached the U.S., which Chris Mercer believes will be “the last country in the world to impose any restrictions on their hunting industry.”

The U.S. is by far the biggest importer of lion trophies—accounting for more than half. In Mercer’s opinion, the U.S. Fish and Wildlife Service, which is responsible for legislation relating to trophy imports, will be resistant because of the lobbying might of hunters and the allied gun industry.

But Ian Michler is confident that worldwide change is inevitable, as people come to see captive hunting—and sport hunting in general—as ethically wrong.

“I don’t expect any overnight successes,” he said. “We’re involved in a major philosophical deep-rooted debate here. This is going to take time.”

This article was first published by National Geographic on 05 May 2015. Lead Image: Oryx carcasses are strung up as bait during a lion hunt in Namibia in 2012. Local people in community-run conservancies are given yearly quotas they can sell to hunters of wild lions, with the revenue meant to go back into conservation and social development. In neighboring South Africa, captive lions are bred to supply hunters with trophies – Photograph by Brent Stirton, Getty/National Geographic.

We invite you to share your opinion whether “Lion Canned Hunting” should banned in South Africa. Please vote and also leave your comments at the bottom of this page.