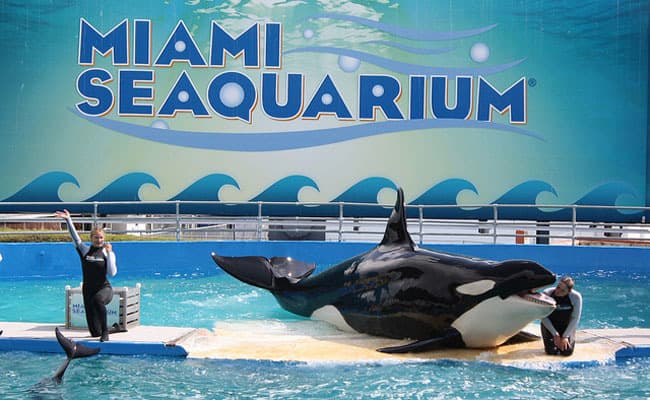 Barker partnered up with People for the Ethical Treatment of Animals (PETA) to make a video calling on the Miami Seaquarium to release her to a sea sanctuary this year.

“Lolita was torn away from her family decades ago and has lived in captivity for more than 47 lonely years,” Barker says in the video, which will air during The Price Is Right this month. “At Miami Seaquarium, her barren, concrete, and chemically treated enclosure is the smallest orca tank in the world.”

“Enough is enough,” Barker concludes. “Miami Seaquarium, please, make your New Year’s resolution to release Lolita to a seaside sanctuary in 2018. Do not let her spend one more year in captivity.”

Lolita, who has become known as the world’s loneliest orca, was once wild and free with a family of her own, the increasingly popular Southern Residents who live in the Pacific Northwest. Sadly, tragedy struck in 1970 when she was taken during the notoriously brutal roundups in Penn Cove. She has been alone since 1980, when her companion Hugo died from a brain aneurysm after repeatedly smashing his head against the walls in what many believe was a suicide. Today, she is the last surviving Southern Resident in captivity, and she remains confined to the smallest and oldest tank in North America.

Animal advocates have been fighting to free Lolita for years. Hundreds of thousands of people have attended protests, written letters and signed petitions on her behalf. There have been some promising signs of hope for her, including her inclusion in the listing that protects her wild relatives under the Endangered Species Act, the U.S. Department of Agriculture essentially admitting her tank is illegally small, and the passage of a resolution by the Miami Beach City Commission urging the Miami Seaquarium to release her from captivity into the care of the Orca Network. However, she remains confined in Miami.

While she may not be able to ever fully return to the wild, the Orca Network has a very extensive retirement plan in place that involves sending her back to a sea pen in her home waters off the coast of Washington, where she would at least be able to experience the ocean and communicate with others of her kind.

According to the Orca Network, she still calls out in the unique language used only by her family members, the L pod. While the ultimate goal of the plan is to reunite her with her pod, if she is unwilling, or unable, the organization has vowed to provide care for her for the remainder of her life.

Hopefully Barker adding his voice to the chorus of those calling for Lolita’s freedom will help continue to build enough public pressure to get the Miami Seaquarium to reconsider its stance, in addition to helping raise awareness about how harmful keeping whales and dolphins in captivity is.

For more on efforts to help Lolita and her family in the wild, check out the Orca Network, Southern Resident Killer Whale Chinook Salmon Initiative, Center for Whale Research, Animal Legal Defense Fund, PETA and Whale and Dolphin Conservation.

For more on efforts to help Lolita and her family in the wild, check out the Orca Network, Southern Resident Killer Whale Chinook Salmon Initiative, Center for Whale Research, Animal Legal Defense Fund, PETA and Whale and Dolphin Conservation.

We invite you to share your opinion whether Lolita the lonely Orca should be freed? Please vote and leave your comments at the bottom of this page.