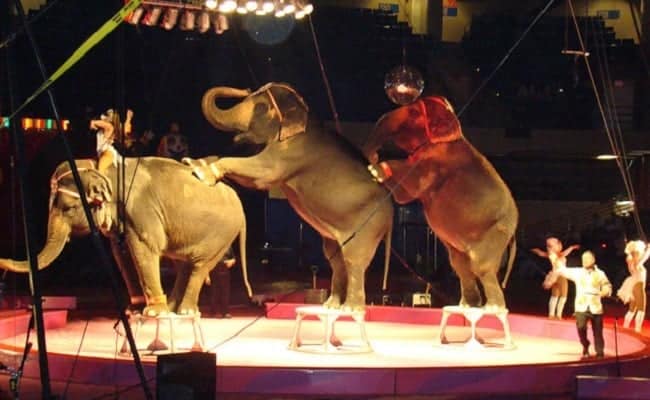 Los Angeles, considered the entertainment capital of the world, will no longer tolerate entertainment that involves performances by wild or exotic animals.

The City Council voted unanimously April 25 to ban the exhibition of these animals for entertainment or amusement purposes in circuses, exotic animal shows, public places and private house parties. L.A. will now become the largest city in the country to prohibit this type of entertainment.

Unfortunately, the ban does not include animals in zoos accredited by the Association of Zoos and Aquariums, petting zoos, research labs, educational presentations or legitimate film productions — but it’s still a very important first step.

The ordinance, introduced by Councilman David Ryu, was supported by several animal welfare groups, including the Humane Society of the United States (HSUS) and PAWS (Performing Animal Welfare Society), which both led the effort to get it passed.

Ryu was motivated to introduce the ordinance after he tried to crack down on Hollywood parties where animals like lions and tigers were put on display in cages.

“Wild and exotic animals have a long history of being exploited for public and private entertainment,” he said in a press release. “Treating animals in this manner has taught generations of people that it is okay to view wild and exotic animals as toys. Los Angeles must take action to make clear that exhibiting animals in this way is no longer in line with our city’s values.”

HSUS President Wayne Pacelle said L.A. “is again showing leadership on animal welfare by banning traveling wild animal acts. Tigers, elephants, and other wildlife are typically subjected to abusive training practices in order to perform stunts, and they endure prolonged confinement in cramped cages as they are transported from city to city.”

In 2013, Los Angeles showed leadership by prohibiting the use of cruel bullhooks, sticks with a sharp hook on the end, to train and control elephants. This ban was a major reason why Ringling Bros. and Barnum & Bailey Circus decided to stop using elephants, and earlier this year announced it was ending “The Greatest Show on Earth” altogether.

With Los Angeles being the home of so many movie studios, it seems a shame that the ban doesn’t include wild animals used in films and TV shows, especially since nowadays they can be replaced with realistic-looking but fake CGI (computer-generated imagery) versions.

The legitimate film industry was exempted because the ordinance “is primarily focused on transient entertainment activities that are widely recognized as causing abuse, suffering and endangering the public,” according to a FAQ. “While there are some concerns about the use of wild animals in film productions, film production using animals in Los Angeles is substantially better regulated and overseen than locations where animal film production would move if no longer allowed in Los Angeles.”

Ryu said the ordinance will address how to determine if a film or TV production is “legitimate.”

Before it becomes a law, the ordinance will be written by the City Attorney’s office and voted on again by the City Council.

San Francisco has already prohibited performances by wild animals, and New York City is currently considering a ban. Along with L.A., here’s hoping these cities lead the way for performances to be banned everywhere in the United States.

We invite you to share your opinion whether more cities should ban wild animals in entertainment? Please vote and leave your comments at the bottom of this page.