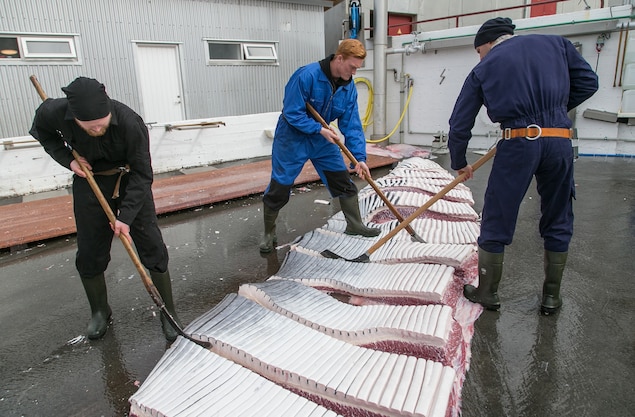 So few people in Norway want to eat whale meat that it’s ending up in the feed manufactured for animals on fur farms, according to a new document released by the Environmental Investigation Agency, a London-based nonprofit, and the U.S.-based Animal Welfare Institute.

The document shows that more than 113 metric tons of minke whale products—equivalent to about 75 whales—was bought or used by Rogaland Pelsdyrfôrlaget, the largest manufacturer of animal feed for Norway’s fur industry.

In addition to being one of three countries that continues to whale, Norway has a thriving fur industry. Last year, it exported between 258 tons of fox skins and 1,000 tons of mink skins to the European Union, according to the press release.

When the International Whaling Commission put a moratorium on whaling in 1986, Norway and Iceland registered objections. The two countries are alone in continuing to hunt whales commercially. Japan, which just returned from the Antarctic with 333 minke whales, hunts under a (controversial) scientific permit.

Norway’s government props up the industry heavily, supporting it with fuel tax exemptions and free storage for whale meat, according to a 2009 report from World Wildlife Fund and the Massachusetts-based nonprofit organization Whale and Dolphin Conservation.

There is little demand for whale meat in Norway, and consumption fell in 2000 to about half a pound of meat per person per year, according to Whale and Dolphin Conservation. Norway has increased its exports of whale meat to Japan in recent years in defiance of the international ban. However, the EIA and AWI revealed last year that Japan rejected imports of Norwegian whale meat when tests showed they contained high levels of toxic pesticides.

“The Norwegian government claims it’s important to have whale meat as a source of food for people, but because of falling demand, the product is now being exported,” said Jennifer Lonsdale, co-founder and director of the EIA. “Now we discover it’s going to feed animals in the fur industry, which we find completely unacceptable.”

The document, published online Thursday, appears to show how many kilograms of feed ingredients the company bought or used in 2014. It lists 113,700 kilograms, or 125 U.S. tons, of whale product, which could include meat and blubber.

Norway issued itself a quota for the hunting of about 880 whales for 2016, down from 1,286 the previous year. But scientists at the whaling commission have criticized Norway’s quota for not being conservation-minded enough. In 2001, the International Whaling Commission passed a resolution calling on Norway to stop hunting and trading whales, but Norway insists it’s a tradition that needs to be protected.

Minke whales in the North Atlantic, where Norway hunts, are not considered to be at-risk, but conservationists and animal welfare activists say the hunts are cruel and unnecessary, given the low demand for whale meat.

This article was first published by National Geographic on 31 Mar 2016. Lead Image: Workers cut up fin whale meat in Iceland in 2015. Iceland and Norway are the only two countries that have commercial whaling programs. PHOTOGRAPH BY ARNALDUR HALIDORSSON, BLOOMBERG, GETTY IMAGES.

We invite you to share your opinion whether Norway’s whaling program should be stopped? Please vote and leave your comments at the bottom of this page: