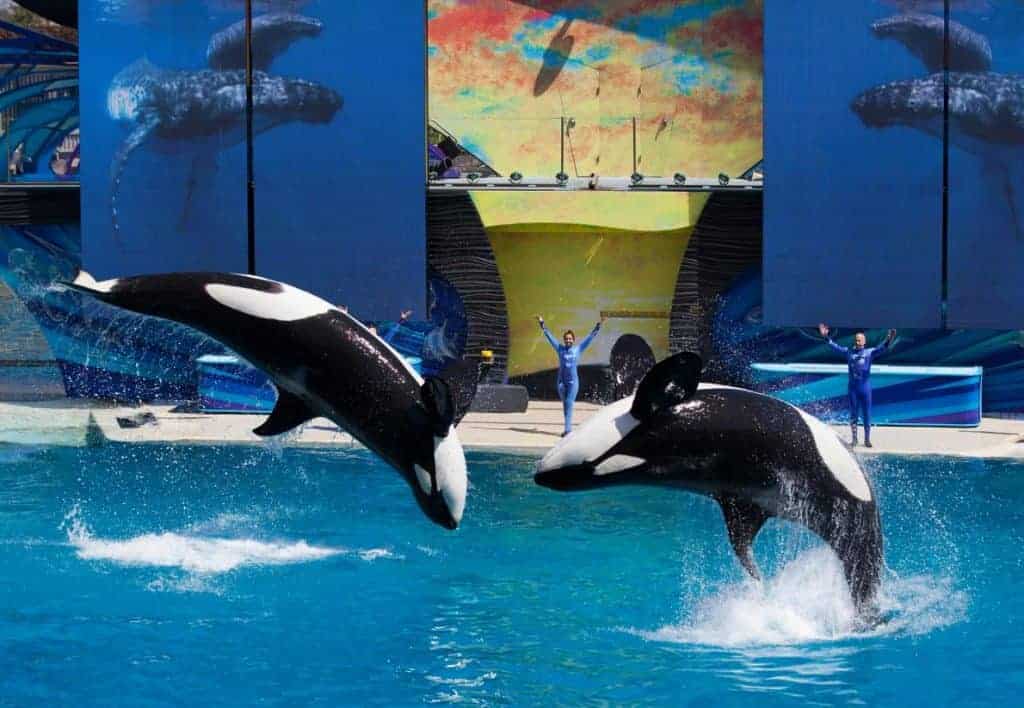 Orcas will flip through the air and perform high-energy tricks for an audience for the last time in California on Sunday, when SeaWorld puts on its final killer whale entertainment show in San Diego. After years of pressure from animal advocates and fallout from the documentary Blackfish, SeaWorld had announced the closing of the shows in March.

Orca entertainment shows are scheduled to end at SeaWorld’s parks in Florida and Texas sometime in 2019.

But after Sunday, the company’s San Diego park “will conduct an interim orca educational presentation in the pool that is also used for underwater viewing … while we remove the existing theatrical moving screens and show set in the stadium and replace them with a natural backdrop that will reflect the natural world of the orca,” SeaWorld San Diego spokesperson Dave Koontz told the media.

Spurring SeaWorld along, California had banned captive breeding of orcas in 2016.

SeaWorld’s orca shows have been seen by more than 400 million people over the previous decades. But the company’s next phase will transition from applause-getting tricks to “new, inspiring, natural orca encounters” emphasizing “orca enrichment, exercise, and overall health”—while its remaining captive whales remain alive.

The company hasn’t added any new killer whales from outside sources for years but had been breeding them until recent months.

The phaseout will take time, as orcas can live for decades. One of the world’s most famous wild whales, Granny (or J2), is presumed dead this week at an age that was estimated at somewhere above her 60s.

In announcing the closing of the shows, SeaWorld CEO Joel Manby said in a statement, “We are proud of our part in contributing to the human understanding of these animals. As society’s understanding of orcas continues to change, SeaWorld is changing with it.”

The closing of the shows has been cheered by animal rights activists. Still, People for the Ethical Treatment of Animals (PETA) has asked the company to immediately “open their tanks to the oceans.”

SeaWorld has argued that its orcas are unfit for survival in the wild and cannot be safely released.

PETA has also called on other companies to end their use of orcas in entertainment shows. Although SeaWorld is the best known example, a few other attractions exist in the United States.

Public scrutiny of so-called Shamu shows grew after famous SeaWorld orca Tilikum killed trainer Dawn Brancheau in February 2010. After that, former trainers began to speak out about stress among the captive whales, bullying as a result of the close quarters, demanding schedules, and the cramped and unnatural conditions they endured.

Over the past few years, attendance at SeaWorld in general and whale shows in particular dropped, protests were launched, and musicians boycotted the parks.

Technically a dolphin, orcas rank among the world’s most powerful predators. They feast on marine mammals such as seals, sea lions, and even whales, employing teeth that can be four inches long. They are known to grab seals right off the ice. They also eat fish, squid, and seabirds.

Though they often frequent cold, coastal waters, orcas can be found from the polar regions to the Equator. They are highly intelligent and often hunt in close-knit groups, called pods, of up to 40.

This article was first published by National Geographic on 04 Jan 2017.

We invite you to share your opinion whether orca entertainment shows should be universally banned? Please vote and leave your comments at the bottom of this page: