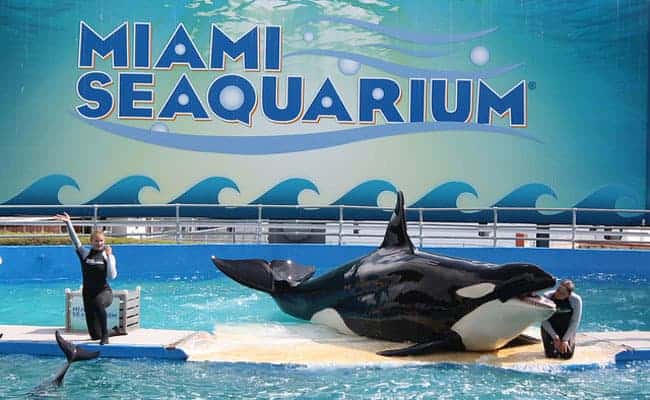 Animal advocates have been fighting for years to free Lolita, a lone orca at the Miami Seaquarium, and now they’re getting some additional support from city officials.

Lolita was once a wild and free member of the southern resident killer whales who live in the Pacific Northwest, but she was taken for public display in the notoriously brutal Penn Cove roundups that took place in the 1970s.

She has since spent almost 50 years at the Miami Seaquarium in the oldest and smallest tank in North America, and she’s been alone there since 1980 as the last surviving southern resident in captivity.

Her advocates have worked tirelessly on her behalf and even though she was officially included in the endangered species listing that protects her wild relatives, she’s continued to languish in her illegally small tank.

In an effort to help, the Miami Beach City Commission just voted unanimously on a resolution introduced by Mayor Philip Levine urging the Miami Seaquarium to release her from captivity into the care of the Orca Network and return her to her home waters.

Even though the resolution is symbolic, it doesn’t legally compel the Miami Seaquarium to release her, it is still a hopeful sign, and it’s certainly going to help keep the pressure on.

The Orca Network has an extensive retirement plan in place that’s been ready and waiting for her for years. The plan involves relocating her to a sea pen off the coast of Washington where she will be able to feel the current and communicate with her family. Lolita is from the L-pod and, and according to the Orca Network, she still calls out in the unique language used only by her family members.

“There’s every indication that Lolita remembers her family,” Howard Garrett, cofounder of the Orca Network, told the Miami New Times. “She still uses the calls, a unique set of whistles, that her family used to communicate when she was growing up. Even now, virtually every night, she calls to them.”

It’s ultimately hoped that she will be able to fully return to the wild and reintegrate with her family, however, if she is unwilling, or unable, they have vowed to provide care for her for the remainder of her life.

The Miami Seaquarium is, unsurprisingly, opposed to releasing her, continuing to argue it poses a significant risk, but Garrett countered, “There is no point in the plan where there is significant risk that cannot be avoided or seen and we will do all of that.”

We can hope continuing to keep pressure on will help compel the Miami Seaquarium to do the right thing for Lolita before it’s too late.

We invite you to share your opinion whether Orcas and Dolphins should be freed from all Seaquariums? Please vote and leave your comments at the bottom of this page.