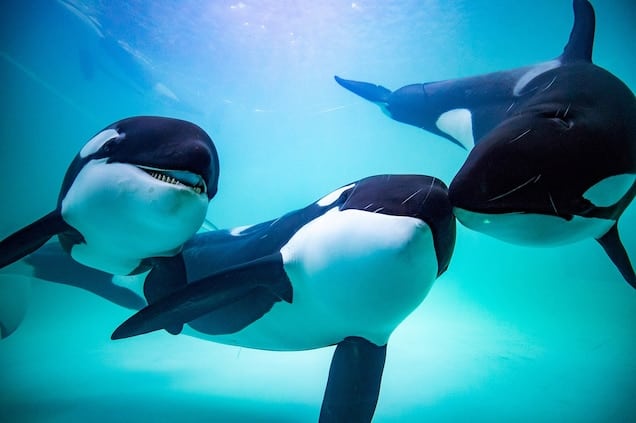 SeaWorld announced a year ago that it would end orca breeding at its parks in the U.S. One year later and nearly 8,000 miles away in China, another such program is just getting started.

The Chimelong Group, one of the country’s biggest amusement park operators, revealed that it opened a breeding center for orcas on February 24 at Chimelong Ocean Kingdom—the first program of its kind in China. Located in Zhukai, a city in the southeast, the park has five males and four females ranging in age from five to 13. The orcas, also known as killer whales, were plucked from Russia’s Sea of Okhotsk, according to the China Cetacean Alliance, a coalition of international conservation organizations.

On its website, the company says it aims to “raise public awareness about killer whales and their conservation status” and “conduct research.” It adds that it plans to build a marine science museum where the orcas will be displayed. It will also work with other facilities to “promote the breeding of killer whales.”

It’s unclear whether the orcas will perform. Nonetheless, concern by conservation groups in China over their welfare, as well as the prospect of other parks opening breeding centers, has mounted since the Chimelong announcement. The park hasn’t responded to a request for an interview.

Shifting Away From Captive Orcas

Orcas are the largest dolphin species and one of the smartest predators in the world. Scientists say that the lack of stimulation and cramped, unnatural conditions in captivity can stress them out, manifesting in stereotypic behavior such as biting and swimming in circles repeatedly. Whales and dolphins die much younger in captivity than in the wild, according to Whale and Dolphin Conservation, a U.S.-based charity dedicated to the animals’ protection.

But unease over the well-being of the orcas at Chimelong extends beyond these broad concerns.

For one thing, the orcas could be family because they were captured from the same habitat in Russia, says Taison Chang, chairman of the Hong Kong Dolphin Conservation Society, a nonprofit devoted to the protection of cetaceans—meaning dolphins, whales, and porpoises. “If they’re related, sooner or later they’ll find some genetic diseases in the orcas because they’ll keep inbreeding,” he says.

Their diet could also pose a problem, according to Chang. Employees feed them fish, the Chimelong Group says, but researchers believe that wild orcas in the Sea of Okhotsk eat only mammals such as seals and sea lions. And the male-skewed sex ratio may lead to destructive aggression, he says, given that male orcas are naturally feisty and may fight to win a mate.

“I will be personally astonished if these animals successfully breed,” says Naomi Rose, a marine mammal scientist with the U.S.-based Animal Welfare Institute.

Growing awareness about the problems associated with captive cetaceans have led marine parks around the world to shut down or redefine themselves. In recent years a handful of countries, including India and Switzerland, have banned the keeping of orcas in captivity.

Public scrutiny intensified after the 2013 release of the documentary Blackfish, which cast a critical eye on the marine entertainment industry. SeaWorld, one of the best known marine parks, ended orca breeding and some of its shows in 2016, after years of declining ticket sales and decreased profits.

“Changing the tanks or the style of show is not going to meaningfully relieve the animals of suffering,” said Jared Goodman, PETA Foundation’s director of animal law, in a statement after SeaWorld’s announcement last year. “The movie Blackfish was the beginning of the end for the practice.”

China appears to be immune to the “Blackfish effect,” the term often used to describe the public’s response to the film. In fact the country’s marine park industry is booming, with 44 facilities today, up from 39 in 2015, according to the China Cetacean Alliance. Nineteen more are scheduled to open in the next two years.

Chang thinks Chimelong has paved the way for more orca breeding in China. “The facilities in China will be like a photocopier machine,” he says.

According to Chang, two other parks—Shanghai Haichang Polar Ocean Park and Linyi Polar Ocean Park—plan to import, or have already imported, orcas from Russia, which sets a yearly quota for the number of orcas that can be taken from the wild. This year, it’s 10. (The practice of taking orcas from Russian waters is controversial because little is known about their numbers. “You can’t determine a sustainable number if you can’t determine a population to start with,” Rose explains.)

China’s marine park industry got started only about ten years ago, Chang says, whereas people in the West have been familiar with marine entertainment for decades. “Today a lot of Chinese people are still very interested in the whole idea of seeing animals in captivity,” he says.

Other Asian countries, notably Japan, also boast marine parks, but Chang says China stands out as the only nation that’s expanding the business at such an aggressive rate.

In addition to ocean theme parks, shopping malls, restaurants, and other unorthodox venues increasingly feature bears, walruses, and other wildlife to attract customers. A polar bear named Pizza gained international attention in November 2016 after video surfaced of him pacing and pawing at a vent in a barren enclosure at a Chinese mall.

Augmented reality lets viewers learn about wild animals without keeping them in captivity.

But Peter Li, Humane Society International’s China expert, previously told National Geographic that there’s a growing awareness among China’s young about animal welfare. And groups like Chang’s hope to hold facilities accountable through investigations and public awareness efforts. Chang says he doesn’t want to put parks out of business, but he does want them to consider other ways of educating the public about whales and dolphins.

That’s an idea whose time has come—new technology is already allowing people to witness the splash of a virtual whale just feet from where they stand.

This article was first published by National Geographic on 17 Mar 2017. Lead Image: These orcas at Chimelong Ocean Kingdom are part of the marine park’s new breeding program. More such programs in China may follow. Photograph by Xinhua, Liu Daweii, Getty Images.

We invite you to share your opinion whether Orcas should be bred and displayed in Chinese marine parks? Please vote and leave your comments at the bottom of this page.