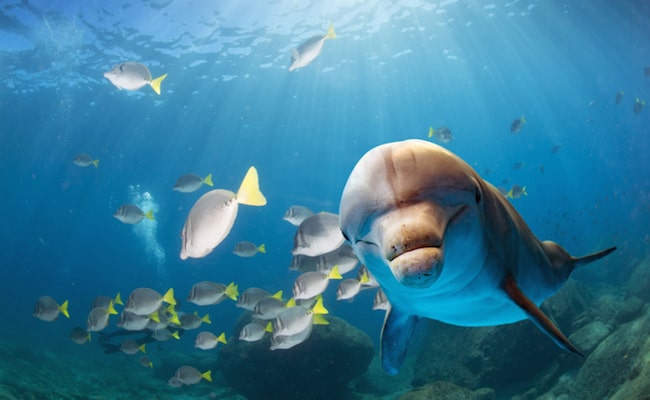 Given how universally revered dolphins are, and the fact that humans rarely eat their meat, you’d be forgiven for assuming that dolphins are largely spared by the fishing industry.

Alas, that’s not the case. As a new report finds, fishers hunt and butcher over 100,000 cetaceans (a classification that includes dolphins, porpoises and tinier whales) each year, a number that’s been steadily growing in the past couple of decades.

We’re not talking about dolphins accidentally getting caught up in nets – this is a deliberate attempt to capture them so they can be chopped up as bait. When the cetaceans are pulled on to the boat, they’re generally stabbed with harpoons and knives and then left to die, so the suffering is intense.

Sign the petition: Call on the Peruvian government to put a stop to dolphin hunting.

In most cases, targeting dolphins and porpoises in this manner is illegal. For some countries it’s a matter of regulations being too lax to serve as a deterrent, but usually fishing boats just knowingly break the law because the lack of enforcement and governmental oversight allows them to get away with it.

According to DJ Schubert, a biologist with the Animal Welfare Institute, a black market that peddles porpoise parts has popped up and participants seem unafraid of any consequences.

That’s absolutely the situation in Peru, the country that by far kills the most dolphins. Up to 15,000 cetaceans die annually off Peru’s coastal waters. Pretty much all of these dead dolphins get sold as bait to shark fishing boats, though some goes to market for people to eat, even though their high levels of pollution make them unsafe for humans to consume.

Hunting dolphins has been illegal in Peru since 1996, so it’s something that should not be occurring. The government has increased its efforts to deter dolphin killing by pressing charges against lawbreakers and forbidding harpoons from being on fishing boats, but undercover investigations show that plenty of fishers are continuing anyway, finding easy ways to disguise dolphin meat as belonging to other types of sea creatures.

Other countries that illicitly kill cetaceans by the thousands include Taiwan, India, Japan, Brazil, Canada, Indonesia and Venezuela. Just as is the case with a lot of other marine life captured by the fishing industry, dolphins, porpoises and small whales are being massacred at a rate that is unsustainable for their limited populations. Turning them into bait for sharks, which are also being pulled from the ocean at unsustainable rates, is only exacerbating the problem.

While it’s great that Peru’s government is starting to acknowledge that illicit dolphin killing is a problem on its coasts, given how it is the global leader in this epidemic, it has the responsibility to do a lot more to protect cetaceans.

That’s why we’re calling on Javier Fernando Miguel Atkins Lerggios, the Vice Minister of Production who is in charge of the country’s fisheries and aquaculture, to take more aggressive steps to protect the dolphins. The laws are already on the books, so now it’s a matter of enforcing them.

If undercover investigations by conservation groups can produce evidence of wrongdoing, the government can certainly make similar efforts. Sign this petition demanding Mr. Lerggios to make it his personal mission to scare this black market out of business.

We invite you to share your opinion whether Peru’s killing of dolphins for use as bait should be banned? Please vote and leave your comments at the bottom of this page.