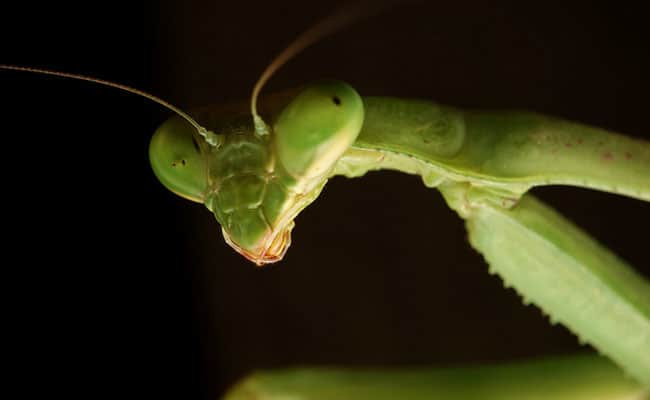 New research documents that mantises worldwide are eating small birds; in the US, invasive mantis species are devouring hummingbirds.

If the headline weren’t startling enough, the photos are even worse. There is an order to predators and prey that feels normal – like, birds eat insects. And when the script it flipped it can feel a bit horror-movie premise; which is why the idea of praying mantises stalking the hummingbird feeder for their next meal seems oh so unnerving.

But sure enough, a new study published in the Wilson Journal of Ornithology finds that mantises feeding on birds is a global pattern.

We already knew that praying mantises – so beautiful and fascinating – are carnivorous insects, generally subsiding on arthropods such as insects or spiders (and their mates after sex, but that’s a different story). On occasion they have been known to eat smaller vertebrates such as frogs, lizards, salamanders or snakes. Stalking birds, however, isn’t usually listed by scientists as part of the mantis menu plan.

The research was conducted by zoologists from Switzerland and the U.S. The team reviewed many types of bird-eating mantises, documenting 12 species and nine genera shown preying on small birds in the wild. And the extraordinary behavior was found in 13 different countries and every continent except Antarctica. As for the victims, they came from 24 different species and 14 families.

“The fact that eating of birds is so widespread in praying mantises, both taxonomically as well as geographically speaking, is a spectacular discovery,” says Martin Nyffeler from the University of Basel and lead author of the study.

But aside from the remarkable discovery itself, what may be even more unsettling is a part we humans have unwittingly played. Of the 147 documented cases, more than 70 percent occurred in the U.S., where praying mantises grab hummingbirds from feeders and as they’re flitting about on garden flowers. (Most of the avian victims are hummingbirds, with an especial preference for ruby-throated hummingbird (Archilochus colubris).)

As it turns out, decades ago alien species of mantises like the European mantis (Mantis religiosa) and the Chinese mantis (Tenodera sinensis) became popular for biological pest control. In theory, hiring insects to eat the pests is a great idea – in practice, when non-native insects are introduced, all heck can break loose. These imported mantis species “now constitute a new potential threat to hummingbirds and small passerine birds,” say the authors, who conclude: “Our compilation suggests that praying mantises frequently prey on hummingbirds in gardens in North America; therefore, we suggest caution in use of large-sized mantids, particularly non-native mantids, in gardens for insect pest control.”

Native insects eating pests is a great thing; invasive insects eating native birds starts edging into the world-gone-wrong realm. Before introducing new species into your garden, do some research – just because you can buy pest-controlling mantises by the hundreds on Amazon doesn’t mean you won’t be putting your beautiful hummingbirds at risk.

For the gory voyeurs, more images can be seen at the University of Basel website.

This article originally appeared on TreeHugger and was published by Care2.com

We invite you to share your opinion whether Praying Mantises should be used for pest control? Please vote and leave your comments at the bottom of this page.

Needs to be native and endemic species. Anything non poisonous I guess. I am unsure though.

Really, genetically modified? How bout using native mantids that do not eat birds.

With the two type of Praying Mantises’ you do not know which is the invasive type and which is the native type of Praying Mantise. That is why I voted NO. When people come to the United States, please leave your species of insects and such in your country. Please do not bring your species of insects here. I love to see all kinds of wildlife and by bringing your type of insecs here defeats the purpose of seeing and listening to our wildlife.

They should only be used for pest control if they can be genetically engineered to a size large enough to control the over-population of human animal pests. Something nature is desperately in need of.

Thank you – I needed that giggle today. I so agree with you 🙂

They can eat a hummingbird. Now I don’t care for them. Otherwise they are too cute.

It’s usually more than a bit disconcerting for us to observe nature taking it’s course, and I include my own observations of this dynamic as well. That said, I’m going to have to say that non-toxic methods of pest control are far, far better than the poisons that so many ignorant non-organic gardeners are willing to use. However, the thoughtless packaging and distribution of Mantis eggs (and Ladybugs, et al) is totally unacceptable! Treating these organic predators as if they are expendable commodities to just lay there and die if not sold in the seasonal displays is barbaric. If you… Read more »

In mozilla everything appears as usual, good. Weird… I will read the article in there and vote.

Today is the 2nd day in a row when I try to respond a poll but when arriving here on the page, the articles are missing, comments are missing, the option to vote is missing, I can just leave a reply. I haven’t changed any settings to my pc, I am viewing it still in google chrome like always, I don’t understand what’s going on.. :/ I will try to open the link in mozilla and see if it works in there or it’s the same. I can’t reply to the poll q as I don’t know the facts, pros… Read more »

I usually get that if I log in on my iphone. I can read everything fine but cannot vote etc. I have to log into my laptop to vote.

Theresa, that’s correct – the mobile phone version of our website does NOT have voting functionality. This affect polls and photo competition articles. Good that you already realized that and voted on your PC!