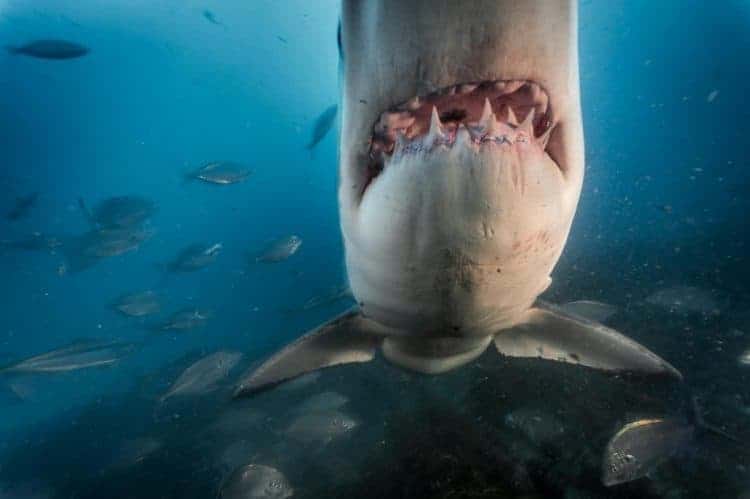 The controversial practice of baiting in shark diving has been called into question in response to several recent incidents, as unsuspecting sharks attracted to cages with bait ended up inside cages with equally surprised divers.

According to underwater photographer and shark diving expert Brian Skerry, it would be impossible to see great white sharks without some kind of bait. Speaking of the Guadalupe area, where the recent incidents took place, he commented that when diving, it is easy to see sharks, but with a catch.

“There is no shortage of sharks—if you use chum, of course.”

Some tour organizations use chum as bait, placing bloody fish parts in the water to attract sharks. Others bait, or “wrangle” the sharks, by throwing tuna tied to a rope into the water and pulling it toward the cage. It appears as though this practice was being used at the time of the recent incidents.

Sharks don’t typically share territory because they are apex predators, meaning they’re at the top of the food chain and occur in lower numbers than other animals in the ecosystem. Both chumming and baiting are legal, but there are restrictions in place aimed at protecting the safety of the sharks and divers. According to the diagram below, bait should not be thrown into the water and then pulled toward the cage.

Bait or chum can also not be placed directly on the shark cage. In one recent incident, experts on the restrictions accuse the tour company of breaking this particular rule.

Director of the Florida Program for Shark Research George Burgess connected the scarcity of sharks with the practice of baiting.

“Dive tourism, which aims to please (meaning they want to make money) puts food in the water, which results in increased visitations from the sharks in that area. In some species, this leads to higher population numbers in the area.”

Burgess argued that baiting can negatively impact the shark population by teaching them learned behavior.

“Feeding of sharks has the effect that it can get rid of that natural concern between the shark and human, or, in some cases, teach them to equate the human with free food.”

In a broader sense, altering the behavior of the sharks can have impacts throughout the ecosystem.

There are examples of sharks in shallower water learning to respond to the sound of the boat’s motor, according to Burgess.

“The animal will appear in the area before the food hits the water, when it even hears the motor of the boat, in the classic Pavlovian scenario where you ring a bell and the animal starts salivating.”

However, a recent study carried out by Dr. Neil Hammerschlag through the University of Miami found that feeding tiger sharks did not negatively impact their behavior. The sharks did not change their migration patterns because of food they received from divers.

Tiger sharks, the species used in the study, are known to stay in one place or migrate long distances, depending on the shark, according to Burgess, who called some parts of the study into question.

While experts disagree on the impact of shark diving on migration patterns, the question remains as to whether this practice is good for shark conservation.

Scientists do agree that sharks are in trouble. Around 100,000 are killed each year for their fins or as bycatch by the fishing industry, and increased awareness of the issue could contribute to conservation efforts.

Skerry, in his years photographing sharks, says awareness and conservation efforts have increased since he started diving.

“Divers in shark cages doing ecotourism around the world has done some good. When I started diving with sharks decades ago, no one was interested in seeing sharks. Now there are shark ambassadors around the world. They’ve done some good things in trying to change the view most people have that sharks are dangerous.”

Burgess argues that while positive stories about shark diving can do some good, the potential for an increase of bites will ultimately have a negative impact.

“One high-profile death can probably hurt sharks more than thousands of safe divers going and looking at them.”

This article was first published by National Geographic on 16 Oct 2016.

We invite you to share your opinion whether shark-baiting should be banned? Please vote and leave your comments at the bottom of this page: