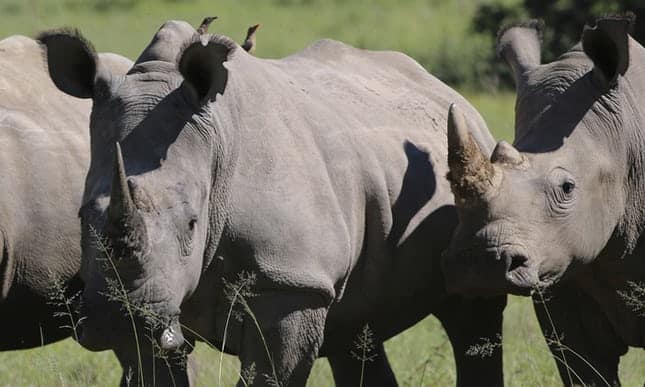 A rhino breeder in South Africa is planning an online auction of rhino horns to capitalise on a court ruling that opened the way to domestic trade despite an international ban imposed to curb poaching.

The sale of rhino horns by breeder John Hume, to be held in August, will be used to “further fund the breeding and protection of rhinos”, according to an auction website.

Hume has more than 1,500 rhinos on his ranch and spends over $170,000 a month on security for the animals, in addition to veterinary costs, salaries and other expenses, the auction website said.

“Each rhino’s horn is safely and regularly trimmed by a veterinarian and capture team to prevent poachers from harming them,” it said, adding that Hume has a stockpile of more than six tonnes of rhino horns.

The auction has been permitted by a ruling from South Africa’s constitutional court in April against a 2009 ban on the domestic trade. An international ban has been in place since 1977.

Rhino breeders believe poaching would be undercut by a regulated trade in rhino horns, though critics say such a trade will encourage poaching, which has occurred at record levels in the past decade.

Opponents of a legal trade also argue that any exported horns would be hard to monitor and illegally obtained horns would be laundered into the legal market, defying global agreements to protect threatened rhino populations.

Hume and other breeders counter that a trade ban has not worked and that alternative policies, including a legal market, should be pursued.

The South African government has drawn up draft regulations for a domestic trade and limited export of rhino horns since the constitutional court ruling. Those guidelines would allow a foreigner with permits to export “for personal purposes” a maximum of two rhino horns.

Poachers killed 1,054 rhinos in South Africa last year, a 10% drop from 2015, according to the government. By some estimates, South Africa has nearly 20,000 rhinos, representing 80% of Africa’s population.

Some consumers of rhino horns believe they can cure illnesses if ingested in powder form, although there is no evidence that the horns, made of the same substance as human fingernails, have any medicinal value. Rhino horns are also seen by some buyers as a symbol of status and wealth.

This article was first published by The Guardian on 26 Jun 2017.

We invite you to share your opinion whether South Africa’s domestic trade in rhino horns should be banned? Please vote and leave your comments at the bottom of this page.

I was SOOOOOOO ANGRY that I did not read the question properly and voted NO, when I thought the question was, if we should allow rhino horn sale.
Please disregard my NO vote, because when I saw the results, I knew I should have read the question properly.
I vote YES!!!!!! Ban domestic trade in rhino horn, it is beyond belief that they cannot see that how it will have buyers rally to get their hands on it, and still leave our wild rhinos in worse peril than they already find themselves.

The incidence of Rhino poaching has NOT dropped; this is a blatantly willful falsehood by South Africa’s corrupt Ministry of the Environment. The figures for Rhinos left is also hugely inflated. The crisis has become so extreme that as of today, 3 Rhinos per day are being murdered for their horns (made of keratin, like our fingernails) and John Hume’s Rhino “farm,” like Lion “farms,” only exacerbate an insanity that is dooming Rhinos to EXTINCTION within this very decade.

WHAT A STUPID RIDICULOUS QUESTION.ABSOLUTELY.

It makes no sense to me when activists say that the selling of any animal part or the arrangement of trophy hunting is good for the animals because it brings in the money which goes towards the safety and better environment of the rest of the animals. So it is fair to pick out animals for execution by man for entertainment to save (questionable) the rest? Also, parts for sale giving value to all others parts on all other animals surely put a value to each and every one of those other animals putting them at risk, as we have… Read more »

Humanity seems to have lost all common sense, compassion and kindness.

Great site. Thank you for the site. Celestial Rhinos should be safe from harm.

Despicable , the corruption is disgusting and shocking and this is criminal and sickening !!

Trade creates a market. No market no poaching.

We are rhinos and we love to graze
Undisturbed
In the sun, we laze
but poachers will not
leave us alone
if you want a horn
grow a one of your own!!!!

Yes – Ban the sale of ALL rhino horns – this guy, Hume, is just opening the door for more illegals killing of these wonderful animals – they need to be protected and the people who think their horns they cure diseases need to be educated – These animals are tortured and killed for their horns and it is 100% wrong

South Africa, a country that is corrupt, ungovernable, destroyed and without soul!

Sadly that is spreading across the world at breakneck speed 🙁