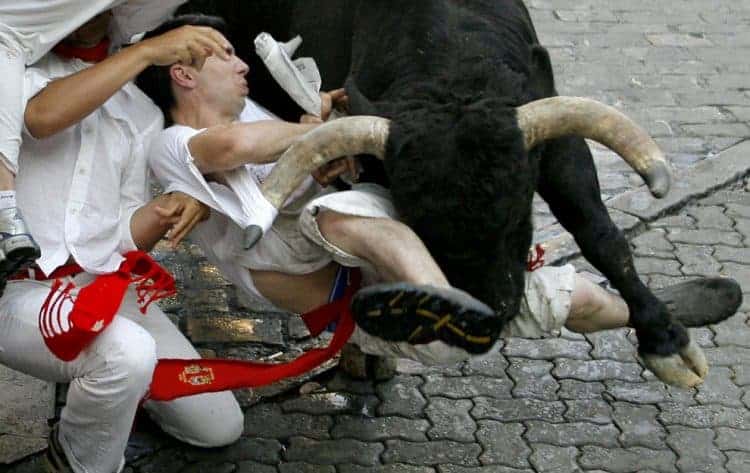 Five people were hurt, including one seriously, at Spain’s famed San Fermin running of the bulls festival, which was also marred by five arrests over allegations of sexual assault, authorities said.

Those hurt fell as they were chased by six rampaging bulls on a two-and-a-half minute dash through the narrow streets of Pamplona on the second day of the city’s nine-day fiesta.

The summer festival is the most famous of many across Spain and attracts thousands of revellers from across the world.

No-one was gored but a 56-year-old man was taken to hospital after fracturing his nose, hospital officials said.

Another man aged 66 suffered severe concussion while three others had minor injuries in a huge scrum of hundreds of people who joined the early-morning fray to see if they could outrun six bulls over 800 metres.

Organisers had warned participants beforehand “you can die” in a bull run, pointing to a death toll of “at least 16 since 1910”. The most recent fatality was in 2009.

On the same day police said they made five arrests after a woman said she had been sexually assaulted overnight, a police spokesman said.

The nationality of the suspects was not clear but a protest march against the assault was planned.

Ahead of the fiesta, a tradition dating back to medieval times, Pamplona city hall had launched a campaign urging a “safe” environment for women “without sexist aggression”.

This article was first published by abc.net.au on 07 Jul 2016. Lead Image: A fallen runner gets trampled by a Ventorrillo fighting bull on the fourth day of the running of the bulls at the San Fermin festival in Pamplona July 10, 2008. (REUTERS / Joseba Etxaburu).

We invite you to share your opinion whether Spain’s “Running of the Bulls” festival should be banned? Please vote and leave your comments at the bottom of this page: