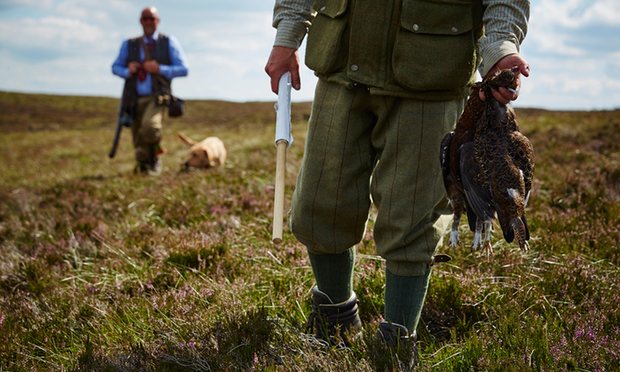 England’s vast grouse shooting estates receive millions of pounds in public subsidies according to an investigation by Friends of the Earth.

Thirty of the estates received £4m of taxpayer’s money between them in 2014, the year examined by the pressure group, including one owned by the Duke of Westminster, the richest landowner in Britain with land holdings estimated to be worth £9bn

The campaigners, who argue that grouse moor management harms the environment and wildlife, found the moors cover over half a million acres, an area equivalent to all the land within the M25, Greater London and parts of the home counties.

The estates are owned by a mixture of lords, dukes, earls and barons as well as bankers, businessmen and firms based in offshore tax havens.

MPs will debate the issue of grouse shooting on Monday, as the result of an official petition backed by more than 120,000 people which demands a ban on driven shooting, where beaters flush birds towards the guns.

The petition claims the management of grouse moors leads to the illegal killing of birds of prey such as hen harriers, which prey on grouse, and the legal killing of foxes, stoats and mountain hares. It adds that the heather burning involved could worsen flooding and climate change.

“These shocking new figures reveal the true, horrifying scale of grouse moors in England and the madness of the current farm payments system that subsidises them,” said Guy Shrubsole of Friends of the Earth.

“Instead of handing out taxpayers’ money to billionaires and offshore firms to indulge in an elite sport, the government must reform farm payments so public money is spent on public goods – like tree-planting, restoring wildlife habitats, farming sustainably and preventing flooding downstream,” he said. The future of the £3bn a year the UK receives in EU agricultural subsidies is a key part of the Brexit debate.

Amanda Anderson, director of the Moorland Association, said driven grouse shooting played an important role in conservation: “Almost two-thirds of England’s upland sites of special scientific interest (SSSIs) are managed grouse moors. Management has helped conserve this unique landscape, whereas elsewhere in Britain it has been lost to afforestation, windfarms or overgrazing.”

Grouse shooting in England and Wales leads to more than £15m a year being spent in rural areas and supports more than 1,500 jobs, according to Anderson. She said: “There is no place for the illegal killing of any wildlife and no place in the Moorland Association for a grouse moor owner or manager found to have broken the law.”

The Friends of the Earth investigation took a Moorland Association map showing “keepered grouse moors” in England and compared it with government datasets and satellite images, which show where burning has taken place, to calculate the area. It found 550,000 acres of grouse moor, all in the north of England.

FoE then used Land Registry data to identify 30 of the grouse moor estates, which cover 300,000 acres of the total. These estates received £4m of taxpayer subsidies in 2014 via the EU common agricultural policy (CAP). 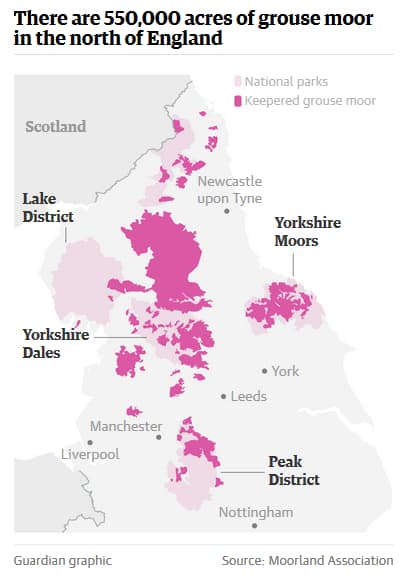 The largest subsidy was given to the Lilburn estate in Northumberland, owned by Duncan Davidson, the founder of housebuilding giant Persimmon Homes. In 2014, the estate received £1.6m in CAP subsidy, with another £1.3m in 2015.

The Abbeystead estate in Lancashire – owned by the Duke of Westminster’s Grosvenor estate – received £7,200 in farm subsidies in 2014 and £203,000 in 2015. The Grosvenor Estate describes Abbeystead as “one of the premier sporting estates in the UK” and it is reputed to hold the record for most grouse shot in a single day: a total of 2,929 birds killed by eight shooters on 12 August 1915.

The Mossdale estate in the Yorkshire Dales, owned by the Van Cutsem family, obtained £54,000 in subsides in 2014 and £170,000 in 2015. In June, the estate resigned from the Moorland Association after a keeper was filmed setting illegal pole traps.

Records in Companies House show that some of the 30 estates identified by Friends of the Earth are owned by firms registered in offshore tax havens, such as the British Virgin Islands, Liechtenstein, Jersey and Guernsey.

The Royal Society for the Protection of Birds (RSPB) does not support the petition to ban driven grouse shooting, but argues that new laws are needed. “As currently practised, intensive driven grouse shooting is a negative environmental impact,” said the RSPB’s Jeff Knott. “Grouse shooting can deliver benefits [for some birds], but not enough grouse moors are delivering to the highest standards.”

The RSPB wants grouse shoots to require licences, which can be removed if the moors are not managed properly or if wildlife crimes occur. “Voluntary approaches clearly haven’t worked,” said Knott. “There is denial that there is any problem and anyone who says otherwise is called anti-shooting.”

A spokesperson for the Department of Environment, Food and Rural Affairs said: “We continue to work with conservation groups and landowners to ensure sustainable grouse shooting balances both environmental and economic needs.”

The UK’s forthcoming departure from the EU has sparked a fierce debate about the future of agricultural subsidies. It was revealed in September that a billionaire Saudi prince received £400,000 a year to subsidise a farm where he breeds racehorses.

The National Trust and many green NGOs have argued for a complete overhaul, ending payments for simply owning land and only rewarding farmers who improve the environment and help wildlife. The suggestion is opposed by the National Farmers Union, which says food production is vital.

This article was first published by The Guardian on 28 Oct 2016.

We invite you to share your opinion whether subsidies to grouse shooting estates should be stopped? Please vote and leave your comments at the bottom of this page: