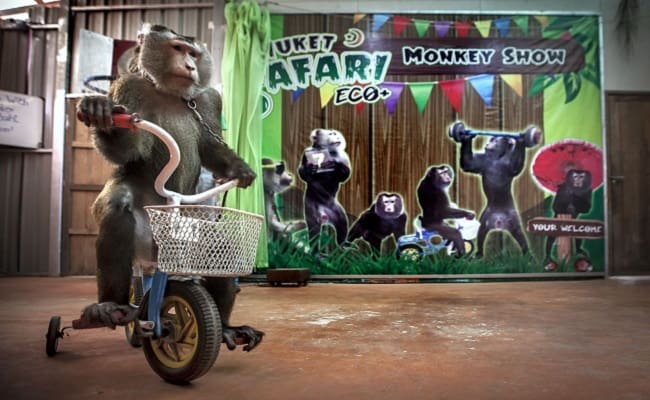 During shows presented several times a day at Phuket Safari Eco+ Park in Thailand, visitors can watch a group of macaque monkeys dance and perform tricks like riding tricycles and lifting weights.

It’s just as depressing as it sounds, according to online reviews.

“There [were] monkeys chained up in cages going crazy, trying to bite their way through the chains around their neck,” wrote one visitor on TripAdvisor.com. If the macques didn’t do the tricks they were supposed to, park employees would roughly yank their chains, according to another review.

Between shows, the macaques are locked into separate small cages backstage with no food or water.

Gekoski decided to check out Phuket Safari Eco+ Park after reading all those bad reviews on TripAdvisor.com. Horrified by what he saw, he’s now raising funds to produce a documentary about the abuse of animals in Thailand’s wildlife tourism industry.

Macques are also displayed in cages elsewhere in the park.

“[There was] a metal container with four baby macaques attached to tiny chains,” Gekoski told The Dodo. “Tourists would come and take photos of, or with, them. The monkeys were drinking out of plastic containers and were clearly very unhappy.”

Along with the macaques, Phuket Safari Eco+ Park forces a chained baby elephant to perform tricks like twirling a hoop with its trunk. Elephant rides are offered on older pachyderms.

If the elephants don’t want to participate, they’re beaten with bullhooks, sticks with sharp, painful hooks on their ends.

In another enclosure at the park, snakes, sheep and other domesticated animals perform in what Gekoski called a filthy “post-apocalyptic mini-zoo” surrounded by trash.

In the wild, macaques may trek over a mile a day in search of food. Social interaction is an important part of their daily lives. Forcing them to live in small cages is cruel, and so is the way they’re trained to perform tricks.

“How they are trained suggests cruelty and depravity become part of their everyday lives,” said Chris Draper, head of Animal Welfare and Captivity at the Born Free Foundation. “They are often beaten or left in barren enclosures with nothing close to what they need.”

Many of the animals “have been illegally smuggled into the country or illegally poached from the wild,” Tom Taylor, general manager of Wildlife Friends Foundation Thailand (WFFT), told The Dodo.

Taylorsaid that although some animals are born in captivity at these parks, the majority are bought from criminal wildlife traffickers, because it’s more cost-effective.

WFFT has rescued hundreds of these animals, but it’s only possible if the owners surrender them or the animals have been confiscated by authorities.

At least Gekoski’s efforts to bring international attention to the terrible treatment of wildlife at these tourist attractions seem to be working.

According to his Facebook page, officials have confirmed they may not be renewing the license of the Phuket Zoo, where chained macaques are forced to play basketball, eat with a spoon and perform other tricks.

“I don’t like this news, which affects Thailand, and especially Phuket as a tourism attraction, with Phuket Zoo being the focus,” the zoo officials reportedly said.

Gekoski wants to set up an accreditation system, so tourists can make informed choices on which wildlife attractions to visit.

“In an ideal world I’d then like to work with the authorities to close down the most neglectful operators,” he said in a press release. “However, change is possible when people vote with their feet and don’t visit these places.”

Please join more than 75,000 people who have signed this petition urging the government of Thailand to shut down Phuket Safari Eco+ Park for violating the country’s animal welfare law.

We invite you to share your opinion whether Thailand’s Phuket Safari Eco+ Park should be shut down? Please vote and leave your comments at the bottom of this page.

WHAT TYPE OF PEOPLE GO TO WATCH THIS CRUEL DEGRADING DISGRACEFUL CRUELTY!