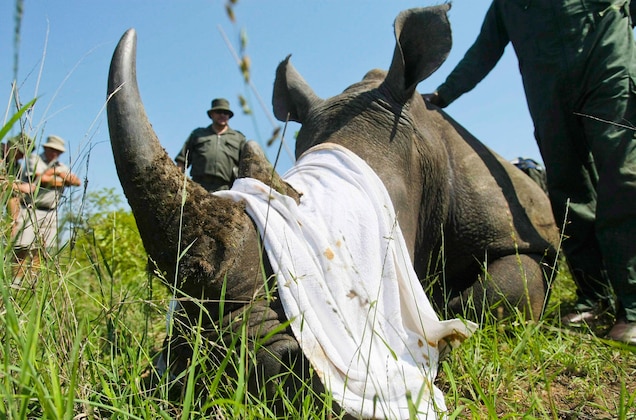 John Hume and Johan Kruger argue that the ban, which has been in force since 2009, is unconstitutional. And they claim it has contributed to the recent sharp rise in rhino poaching in South Africa.

International trade in rhino horns has been banned since 1977, but smugglers sell the horns in Vietnam and elsewhere in Asia, where they’re touted as hangover cures and aphrodisiacs. They’re also used in traditional Chinese medicine.

Hume and Kruger contend that rhino horn is a renewable resource since a horn can be painlessly cut off. And they say that a legal domestic trade in horn would depress prices and discourage poaching, as well as allow proceeds to go toward conservation. They also favor lifting the international ban.

The counter argument conservationists make is that a legal trade would simply allow poached rhino horn to be passed off as legal horn, circumventing trade controls and encouraging poaching.

A recent study by economists at the University of Pretoria found that the demand for rhino horn is independent of price, meaning people will buy it no matter how expensive it gets. Vietnam, in particular, is driving the illicit trade. The country’s upper-middle class is booming—and people want rhino horn as a status symbol.

“The combination of these factors has pushed the demand to all-time high levels,” says James Blignaut, one of the study’s authors.

The civil case in South Africa comes at a critical time, as next year’s meeting of the Convention on International Trade in Endangered Species of Wild Fauna and Flora (CITES) will be considering a proposal from South Africa to lift the international ban on the rhino horn trade.

South Africa’s minister of environmental affairs, Edna Molewa, refused to lift the domestic ban earlier this year at the farmers’ request, though Molewa has said in the past that a legalized trade within South Africa could help combat poaching.

Hume, who owns one of the largest rhino farms in the world, with more than 1,000 rhinos, has been systematically dehorning his rhinos for years.

His reported four-ton stockpile of horn is worth around $235 million, based on today’s black market prices. If the ban is lifted, he and other private rhino owners stand to reap large profits.

This article was first published by National Geographic on 22 Sep 2015. Lead Image: A rhino in South Africa’s Kruger National Park is tranquilized to implant it with an electronic tracking chip. Last year, poachers killed more than 1,200 rhinos in the country. Photograph by Foto24, Gallo Images/Getty.

We invite you to share your opinion whether the ban on rhino horn trade should be lifted? Please vote and leave your comments at the bottom of this page: